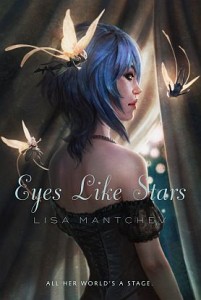 Summary:All her world’s a stage.

Bertie Shakespeare Smith is not an actress, yet she lives in a theater.

She’s not an orphan, but she has no parents.

She knows every part, but she has no lines of her own.

That is, until now.

Why did I read the book: I love the internets. I first saw the cover of this book at The Story Siren‘s blog. I then googled it and was directed to the book’s webpage and immediately KNEW I had to read the book. I then twitted about it and lo and behold, the writer saw my twit and very generously offered a review copy.

“Welcome to the Théâtre Illuminata, where the characters of every play ever written can be found behind the curtain. They were born to play their parts, and are bound to the Théâtre by The Book–an ancient and magical tome of scripts. Bertie is not one of them, but they are her family–and she is about to lose them all and the only home she has ever known.”

Beatrice Shakespeare Smith or Bertie, is a 17 year old girl who lives in the Theatre Illuminata ever since her mother left her there as a child. She grew up surrounded by characters from every play ever written and there were never truer words than the words “all her world is a stage”– literally speaking. In a world where any character from any play can be called upon by writing their name in the Call Board, she spends her time surrounded by people like Nate, a pirate from the Little Mermaid, the ait spirit Ariel from The Tempest and Ophelia, from Hamlet.

Free from most limitations that girls her age have, without parenting guidance and with the instigation of her sidekicks, the four fairies from A Midsummer’s Night Dream – Peaseblossom, Cobweb, Moth and Mustardseed – she constantly gets into scrapes that drives the Stage Manager insane. After the latest disturbance though, she is called to the Theatre Manager’s office and is given an ultimatum: she is to prove that she is invaluable to the Theatre or she has to leave. And she only has a few hours to do so.

At the prospect of having to leave the Theatre and everything she has ever known , Bertie sets out to prove her worth with the help of her friends. Her plan is to become a Director, a role that is pointless in a place where the characters know their parts by heart. But her ingenious idea is to shake things up by directing Hamlet….in Egypt. Needless to say, Chaos ensues. The players of Hamlet are distraught. The Stage Manager is not too happy. She is urged to use Badinage and Persiflage to convince people that she is a Director.

What she didn’t know would happen was that the changes to Hamlet cause a certain unbalance to their world. And Ariel, once he realises that if Bertie can leave the Theatre ,then she might be able to set him free, proceeds to tempt her.

Then, the Book disappears. And Bertie realises that she does need to find a role for herself or else her entire world will crumble down. She may not be a Director but there is something else she can do.

And the result is one of the most creative, fun, enjoyable books I had the pleasure to read lately. The premise is brilliant – with a bit of magic and a lot of talent, Lisa Mantchev created a world that I cared for and wished I could live in. It is the Theatre and it has Tragedy, Comedy, Drama and Romance and as I turned the pages I was engrossed by the imaginative story. I mean how could I not?

When Hamlet’s Ophelia walks around the theatre looking for puddles in which to drown; or if there is any drama, the Chorus starts to sing all around them; Or Ariel, the air spirit from The Tempest who wants nothing but his freedom and who says it is not enough to be set free every night on stage; or how in the Props department, Bertie finds Alice in the Wonderland’s DRINK ME potion and proceeds to drink it and the result is a Most Excellent Scene of the romantic variety.

There are friends, sidekicks, and of course villains: from the Stage Manager to the Sea Goddess from the Little Mermaid, every character has a role to play and a stance to take. Even Chaos and Mayhem become main characters at one point.

Except for Bertie, at least at first. Truth be told, when the book started I was surprised at how immature this 17 year old girl was. But then it hit me: of course she is. With the companions that she has and no parents or role to play , it couldn’t have been different. Which is the point after all: Eyes Like Stars is a coming of age tale for Bertie, in which she finally finds her place in life. From the truths she comes to find, choices she has to make and even the awakening of her sexuality ( there is a love triangle – Ariel x Nate. I am on Team Nate although Ariel is a glorious Bad Boy) to the realisation that this damsel has to rescue a person in distress and a heritage to discover.

Bertie IS all the things I mentioned before but she is also full of fire, vibrant and an adventurous spirit. And I simply can’t wait for Act 2.

Notable Quotes/ Parts: I loved the interaction between Bertie and the fairies who were ever so funny:

“The only reason I’m friends with any of you is because I outgrew the von Trapps, one annoying Austrian at a time.”
“You could have joined the Lost Boys,” Moth said.
“They did nothing but whiz on trees, and I’m not properly equipped for that”.
“So you’re stuck with us because of your innate inability to pee standing up?”

“We’ve more important things to worry about right now than food”.
Mustardseed said reproachfully, “I’m certain you don’t mean that”.
“She’s under duress,” Peaseblossom said.
“I don’t care if she’s under duress, over it, or alongside it,” Moth said, “Nothing in this world supersedes cake”.
“Pie does,” Cobweb corrected.
Moth glared at him. “Are you under duress, too?”.

Verdict: Funny, creative and a wonderful coming of age story.

Reading next: The Angel’s Game by Carlos Ruiz Zafon