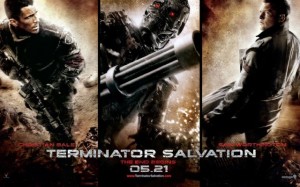 I think I speak for much of my generation when I say that the Terminator movies played a major, influential role in our formative years. The films, especially T-2: Judgment Day, are EPIC: from the memorable quotes (“Chill out, dickwad” “Have you seen this boy?” or the more resonating “Hasta la vista, baby” and “I’ll be back”); to the terrifyingly badass T-1000; to Linda Hamilton’s crazy buffness; to Edward Furlong’s sweet sidepart; to the revolutionary silver amorphous blob special effects; to, of course, AH-nold. 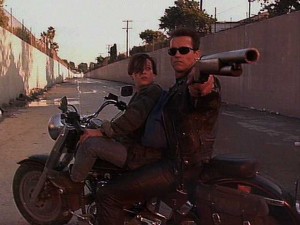 Not to mention, the movies were pretty well acted, tightly plotted, impeccably directed, and had a damn good story to boot.

It’s a huge bill to live up to. T-3 couldn’t do it – but did we expect it to? Though it could not be expected to live up to its predecessors, Terminator 3: Rise of the Machines was a good summer flick with a generally cohesive story. The Sarah Connor Chronicles – rest in peace, dear canceled show – had a crappy start but gained speed and a devoted following by mid-run, and certainly employed strong characters (especially strong female characters, as the title suggests).

So, when I first caught wind of Terminator: Salvation last summer at a screening of The Dark Knight, and learned it would be starring none other than Christian Bale, I was psyched. The excitement only grew as the blockbuster season started this year, and it was with bated breath that I sat in a dimming theater as the opening credits began to roll.

I couldn’t believe it. I mean, it’s Terminator. In the FUTURE, this time. With Christian F*bomb Bale as John Connor! How could this be messed up?! I wasn’t expecting an Oscar worthy screenplay, but Terminator: Salvation failed on almost every level.

The story is simple, and at face level sounds fantastic: the film opens with an inmate on death row being begged by a chemo-bald Helena Bonham Carter, aka Dr. Serena Kogan of Skynet, to donate his body to science after his execution – which he agrees to. Jump to the future: Judgment Day has happened, and John Connor is widely admired, but only a midlevel officer in the human resistance movement. On a run to infiltrate a Skynet R&D base, everyone but Connor is wiped out (pure luck on Connor’s part). Shortly after Connor’s rescue chopper arrives, a dazed man stumbles out of the crater that used to be the Skynet facility, and soon we see he is none other than Marcus Wright – the executed criminal from the beginning of the movie. Marcus has no idea when or where he is, but he manages to hook up with two Los Angeles survivors – Kyle Reese (Connor’s father to be) and a mute child, named Star. When Kyle and Star are nabbed by a Skynet version of a transformer, Marcus is hell-bent on getting them back, and runs into a snarly, untrusting John Connor in the process. After a lot of action, Connor finally lets his guard down a bit and trusts the strange man-machine Marcus enough to accept his help in saving Kyle.

Sounds good enough, right? Unfortunately, the whole thing was undeniably flat – certain aspects of the story were moronic, the performances caricaturish and over-dramatic, the dialogue cringe-inducing, and the special effects, though good, were oddly soulless. 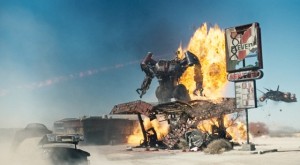 Transformers. They are everywhere.

The worst part? Christian Bale. He was gawdawful in this movie. Every scene was absurdly melodramatic – from John listening to his mother’s tapes in a solitary room, to him growling at scattered listeners over a radio transmission. Granted, John doesn’t have much to be happy about in his wasteland of a world, but every line out of his mouth is injected with so much gravitas, it’s cheesy (in retrospect, perhaps Bale’s onset blowup is understandable – he’s so extreme in the entire film, growling in Batman voce during every scene). What’s worse, this new future John Connor is hardly inspiring – I was left shaking my head, asking myself: this is the guy that’s got all the machines’ panties in a twist? This screamy, silly little man? The human race would be toast indeed if this was our only hope.

Not only was Bale terrible, but so too were almost all the other members of the cast: the military commanders (notably bad was Michael Ironside, a.k.a. that awesome guy who plays Rasczak in Starship Troopers), Bryce Dallas Howard as Connor’s preggo nurse wife (a.k.a. the stunning, redheaded daughter of “Hi, I’m Ron Howard,” and former muse of M. Night Shyamalan), and even Anton Yelchin (a.k.a. that Charlie Bartlett kid) playing Kyle Reese, was, for all his wide-eyed charm, uninspired. 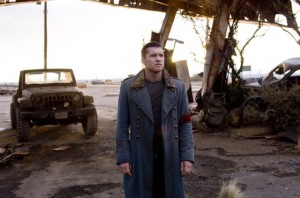 The best actor – make that the best part of the movie in its totality – had to be newcomer Aussie Sam Worthington’s subtle, strong performance as new terminator Marcus Wright. For all that this is supposed to be the continuation of John Connor’s story, Terminator: Salvation is truly about Marcus. Marcus’s story is the one that captivates and entertains; his struggle is infinitely more interesting than Connor’s one-note (and might I say, totally self-serving) motivations. Sure, he ain’t got nothing on the soul-searching of the Threes in Battlestar Galactica (nor is the writing even remotely close to BSG’s depth), but he evokes emotion in a way that audiences can believe and to which they can relate.

Considering the overall badness of all the performances (save Worthington’s Marcus), I have to think the fault lies with director “McG”. Yes, that is his name. McG. (Is it pronounced “Em-Cee-Gee”? Or is it “Mic-Gee”? Like McLovin? This sounds like an Irish rapper, any way you cut it. The mere fact that the director chooses to go by “MCG” says something.) I’m not impressed.

Not to mention, the performances were exacerbated by virtue of the horrendous dialogue. For example:

“We gotta survive! Up here (points at head). And in here (points at heart).” (a teenage John Reese – played by that Charlie Bartlett kid, who also plays Chekoff in the reimagined Star Trek – says dramatically to a group of humans in cattle cars en route to Skynet’s headquarters)

“WHAT ARE YOU?!” “YOU’RE A MACHINE!” “THIS WAR ENDS TONIGHT!” “WE ATTACK TONIGHT!” “TONIGHT WE FIGHT!” etc (Basically all of John Connor’s lines)

“He saved my life. I saw a man, not a machine!” (Moon Bloodgood – yes, that’s the actress’s name – cries to Bale’s Connor re: why she helped new terminator Marcus)

“You know what separates us from the machines? They don’t bury their dead…But no one’s gonna bury you.” (Reese, again, to Marcus)

It’s vomit-inducing. Every other line is a really bad one-liner.

And then, top these bad performances and crappy dialogue with a story full of gaping plotholes. For one thing, why wouldn’t the machines simply KILL Kyle Reese as soon as they identified him instead of taking him in to Skynet headquarters, thereby snuffing Connor out of existence without actually having to kill Connor? Why would Connor address everyone via open radio channel, spilling secrets like “tonight we attack Skynet headquarters!” when – hello! – any machine could intercept the message? 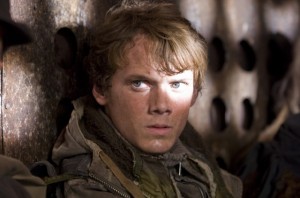 Why would a system of machines even need a “headquarters” to begin with? It’s not as though they can’t communicate with each other via electronic signals without ever having to be “face to face” and in a central location. Even allowing for a strategic machine base to exist, why would Skynet headquarters include a spiffy computer system that lowly humans can manipulate and hack into via touch screens and keyboards? Why would headquarters include pristine pretty rooms made of glass and manipulable by human hands? WHY would there be all these random pyrotechnics flaring up around headquarters when they serve absolutely no purpose?

But that’s not all. There are also the flat-out stupid aspects: a helicopter outruns a nuclear bomb (never mind the whole EMP thing; never mind the idiocy of a supremely intelligent race of machines keeping pretty, useless pyrotechnics next to the open terminator nuclear fuel cells).

And the coup de grace (and I’m not even spoiler tagging this because it is that stupid): John Connor gets pierced through the chest by a steel rod, and his “heart can’t take it”. So, in the middle of a desert, Terminator Marcus decides to give up his heart for transplantation into Connor.

I repeat: OPEN HEART TRANSPLANT SURGERY. In the middle of the desert.

There are no words to describe this pinnacle of un-believable idiocy. Even allowing that Marcus is an acceptable donor for Connor, even allowing that this delicate surgical operation can be carried out in the middle of the desert, even allowing that infection wouldn’t set it or that Connor’s body wouldn’t reject the organ…the only character who mattered in this mess of a movie? He’s the one that gives up his life for Connor. And for what? The war certainly isn’t over, and John hardly seems the prophet his mommy told him he would be one day.

Perhaps that’s the most resonating image, and an accurate comparison of Terminator: Salvation and its place in the Terminator canon: like Marcus, the franchise has ended up gutted and heartless, an empty shell of metal that once was something great.

Rating: 3 Horrible – Avoiding a lower grade only because of Sam Worthington’s performance. And a fun cameo that I totally won’t spoil.

Getting Ready To Be Lost – One Last Time!

From the Page to the Screen: All You Need is Kill / Edge of Tomorrow