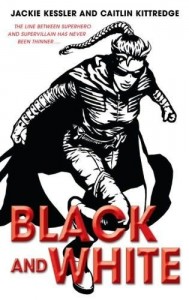 Stand Alone/ Series: book 1 in a new series but can be read as stand alone (i.e. no huge cliffhanger)

Summary: It’s the ultimate battle of good versus good.

They were best friends at an elite academy for superheroes in training, but now Callie Bradford, code name Iridium, and Joannie Greene, code name Jet, are mortal enemies. Jet is a by-the-book hero, using her Shadow power to protect the citizens of New Chicago. Iridium, with her mastery of light, runs the city’s underworld. For the past five years the two have played an elaborate, and frustrating, game of cat and mouse.

But now playtime’s over. Separately Jet and Iridium uncover clues that point to a looming evil, one that is entwined within the Academy. As Jet works with Bruce Hunter—a normal man with an extraordinary ability to make her weak in the knees—she becomes convinced that Iridium is involved in a scheme that will level the power structure of America itself. And Iridium, teaming with the mysterious vigilante called Taser, uncovers an insidious plot that’s been a decade in the making…a plot in which Jet is key.

They’re both right. And they’re both wrong. Because nothing is as simple as Black and White.

Why did I read the book: the Extraordinary Karen Mahoney recommended it to me and let me borrow her ARC.

When I first heard about Black and White, I thought, what a GREAT idea – there aren’t enough superheroes novels out there, if you ask me. Vampires, Werewolves, Fairies, Demons, yes. Superheroes? No. On the other hand, I thought – what could one possibly add to the superheroes’ lore that hasn’t already been done in comics? I mean – all the cool superpowers have been taken, all the cheesy lines delivered and even all the Dark Side of superheroes has been explored with Batman Graphic Novels and the Watchmen. Could Black and White offer something fresh to the genre?

In one word: yes.

For starters, there is the fact that the two main characters here are women – The Superhero Jet and the SuperVillain Iridium. Former best friends who find themselves at different sides of the Law. Jet is the do-gooder hero, the face of the City, the one that always follows the rules set by the Corps. Iridium is the rabid ™ vigilante who rules the underworld. They have been at odds with each other since their time at the training academy for superheroes and since Iridium has turned her back at the official rules.

But as the book’s tagline says: nothing is black and white in the world that Jackie Kessler and Caitlin Kittredge created. Jet is the strict chick sorely in need of loosing up (think Superman) whereas Iridium, well, Iridium rules, quite frankly and even though I would like to say more on the subject of Iridium, I simply can’t as it would be spoilery.
But their relationship goes way beyond simply good x evil.

The chapters alternate between Iridium and Jet’s POV (Jackie K. writes Jet and Caitlin K. writers Iridium by the way and each has a very distinctive voice) and at every few chapters the story alternates between Now and Then. Now being the current developments of the story in which Jet is trying to get Iridium who is trying to get…something big which I shall not spoil (I am feeling quite restricted in this review!). And Then, following the two in their five years at the Academy where they met and where they received their training until they broke apart .

Then there are the powers themselves – Jet may be the face of the City, may be the superheroine everyone looks up to, but she is far from being stable and that is because of her power of Shadow-wielding. Because this an unique power that few superheroes possess , she is rather alone with the knowledge that all Shadow heroes will eventually go crazy – and that is part of why she follows the rules set by the Corp so closely, it is a way of keeping tight control on herself. Iridium wields Light and is cocky and smart-mouthed and together they are a perfect foil to each other’s strengths and weaknesses and their present-day enmity is all the more interesting to read about by having this insight into their early lives.

The two may well be, the Black and White of the title, not only because of their positioning in the world but also because of their powers. But the Black and White may also refer to the world they live in – the year is 2112 and society is divided between those that like having superheroes around and those that don’t. Then there are the Corps – the Corporation that train and shape the superheroes since they are children. The supes go to the Academy (like a high school) where they mingle with other superheroes, learn to fight and in a more complex and fresh twist, get “branded” – every superhero goes through tests and talks to establish what is the best way to market themselves -from their uniform , to their aliases. They even have to test the lines they will say when fighting villains and before leaving the Academy every superhero needs to get a sponsor. It is all very market- centred and if preludes the motive for Iridium going a different way.

There is a narrow line that both walk (be it sanity or insanity/law or out-law) and as the story progresses with events that bring to the front the fact that not all humans want to be saved by superheroes as evidenced by the actions of the Everyman society and the disappearance of a reporter who have found a connection between the mythical Icarus Project and the Corps. More interesting events occur, and the line between Jet and Iridium and others blur and more engaging the book becomes till the final blow-out with the Villain, like all Cool Villains, revealing all to the hero.

But I think the Black and White ALSO refers to the book itself: this is a story and a world that both pay tribute (the opening pages are so clearly a declaration of admiration to the Watchmen!) and make a parody of Superheroes. It works and it is cool.

Notable quotes/ Parts: The entire book is actually wicked cool. The fighting sequences, the on and off relationship between the girls, sometimes even the poignancy of it all. Iridium’s lines were awesome.

Additional Thoughts: The authors have created a website for the series called Icarus Project (yay, there is another book coming called Shades of Gray!) with a list of characters, details of the world and a gallery with for example the Corp-Co’s Extrahuman Division Logo and a wanted poster for Iridium. 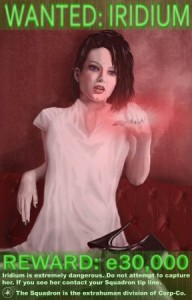 Clearly, these two authors are having fun with these books, and it shows.

Verdict: Superheroes in the future with different powers and a very interesting-to-read relationship between the two protagonists: what’s not to like? Good fun and definitely recommended for YA as well.

Reading next: Frederica by Georgette Heyer