To date, Ana has been the one with a monopoly on these “I Love This Series” posts – but finally it is my turn! *insert evil cackle*

Today, I’d like to tell you a bit about a series called the “Sisters of the Sword” by Maya Snow. The series currently comprises three titles: Sisters of the Sword, Chasing the Secret, and Journey Through Fire. The books were published by HarperCollins and released in the US in 2008 and 2009.[1. There seems to be a fourth book in the series, published in the UK and titled Crushing the Stone and in the US as The Battle Dawns, but, infuriatingly, I cannot find a copy for purchase anywhere. Argh. Garr.] As we have been doing for all the posts in our “I Love This Series” series, this review is more of a general overview of the Sisters of the Sword books and will be completely spoiler free. 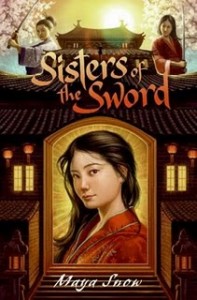 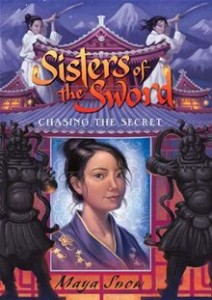 I see you blink with surprise. A girl? you are thinking. Surely a girl cannot be asamurai. But you are wrong.

Kimi dreams of being a great samurai warrior, but she and her sister, Hana, are young ladies of ancient Japan, daughters of the Jito of the province. Her future seems clear: Girls do not become samurai.

Then, a murderous betrayal shatters the sisters’ world. Suddenly, Kimi and Hana are thrown headlong into a life of warrior codes, deadly swords, and dangerous enemies. Life has swept them into an adventure more heart-pounding than the sisters ever could have imagined . . . and once it has been set in motion, nothing will ever be the same.

The story is thus: Kimi is a headstrong young teen girl, a noble daughter of the local jito, or lord samurai, in feudal Japan. She’s thrilled when her Uncle Hidehira shows up to visit her family home, as Hidehira always spares time for his nieces and nephews, and tells Kimi stories of his life on the road as one of her father’s most trusted, sworn samurai warriors. Although Kimi’s father is actually the younger Yamamoto brother, he was named jito by his father after earning that right by displaying superior fighting, strategic, and leadership skills as a young man. Despite being jilted of his title as the eldest son, Hidehira has always loyally supported his younger brother’s rule, and served as the most loyal samurai in his ranks.

But everything that Kimi and her family have ever thought about Hidehira is about to change.

While her father, uncle, and two older brothers participate in a private ceremony, Kimi convinces her reluctant younger sister Hana to eavesdrop with her (Kimi has always wanted to be a fighter and longs for the glorious life of a samurai, while her elegant sister Hana does not). In silent horror, both sisters witness their beloved uncle murder their unsuspecting father and older brothers in cold blood – seizing the title of jito for himself and at last revealing his true nature as a man corrupted by jealousy and hatred. Hidehira then orders his samurai to search the estate to find and slaughter the remaining family members – Kimi, Hana, their mother, and baby brother Moriyasu. Unable to find their mother and brother as the samurai ravage and burn their home, Kimi and Hana flee to the woods, desperately trying to lose the murderous samurai in pursuit. Thanks to their father’s basic training lessons, the two sisters are able to slay one of their pursuers, but they know they must immediately find refuge or face certain death at the hands of their usurping uncle. With nowhere else to turn, the girls stumble upon Master Goku’s dojo – a highly respected training academy for noble children, and the school that Kimi and Hana’s brothers attended before being killed. Determined to survive, the sisters disguise themselves as skinny peasant boys and beg for entrance at the dojo. The fair and wise Master Goku allows them to work in the dojo’s kitchens after sensing their determination and testing their skill at fighting, and he promises them the possibility of becoming students if they work hard for their keep. Relieved, Kimi and Hana feel like they have found safety at last…but a familiar face at the dojo (none other than their arrogant cousin Ken-Ichi, son of Hidehira) takes an instant disliking of the sisters, and will not stop bullying them and their friends.

Soon, not even the dojo is safe, as Hidehira begins to seize control of all the surrounding territories and provinces, bringing his hunger for power to Master Goku’s door. The girls know they cannot stay disguised forever, and they dream of finding their mother and baby brother. As their Uncle draws nearer, Kimi stokes her rage, vowing that she will get strong enough, fast enough, and skilled enough to kill Hidehira, and restore honor to the name Yamamoto. 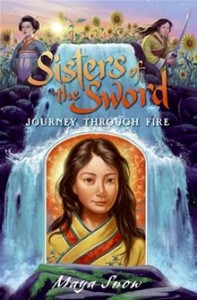 At first glance, the Sisters of the Sword series seems like just another drop in the orphaned child-seeks-vengeance ocean. Certainly, familiar tropes abound, especially in the first book. There are the wronged/orphaned children, the girls dressing as boys to survive and apprentice as warriors in a culture that does not allow women to become warriors, as well as the requisite struggles with vengeful bloodlust versus doing the right thing. Ok, yes, Sisters of the Sword is all of that. Also, the writing style for the books (especially in Sisters of the Sword) is very simple and straightforward, suited to an upper Middle Grade/young YA audience, and there is a frustrating use exclamation marks early in the book (which is a little annoying, just for my personal preference – maybe other people don’t mind exclamation marks. I digress). BUT, all that said…

Sisters of the Sword uses all of these tropes in a perfect way. In many ways, the series reminds me of another beloved, wronged orphan – he who must be named as Harry Potter. Like Harry Potter, this series starts out very young in terms of protagonist and style, but with a copious (and foretelling) amount of tragedy. As with Harry Potter, good and evil are very black and white – or are they? In Sisters of the Sword, though Hidehira is the embodiment of irredeemable evil, there are a number of other characters with some unexplored depths. In the case of dojo bully Ken-Ichi (who is SO Draco), there is some humanity and frailty in him, despite his uncle’s treachery (even when Ken-Ichi commits an unspeakable act, it isn’t what he has wanted to do – this is one character that I *know* will make a reappearance in the next book, and I will bet anything that his story will be a complex one). And, as with Harry Potter, as the series progresses, these simple dividing lines between “good” and “evil” become ever-more blurred as the characters, Kimi and Hana especially, grow and change, pitting friends and family against each other. By the end of book 3, things have changed dramatically. Make no mistake – this is a series full of violence and blood, heartache and triumph.

Which brings me to my next point: the two main protagonists in this book, Kimi and Hana, freaking ROCK. Although the books are narrated solely by Kimi, Hana is just as much a part of the story as her impulsive sister. I love the dynamic between these two, and how their relationship of unconditional trust and love begins to show the strain of their ordeals as the series progresses. Kimi, of course, is my favorite character, with her fiery temperament, almost self-destructive courage, and her frank inability to sit back in the face of danger. I love that Hana is just as talented as Kimi, but in a different way. While Kimi has always thirsted for adventure and action, Hana has been the elegant, graceful, restrained sister. While Kimi has taken after her father, Hana is her mother’s child (as becomes clear in Through the Fire). Also, I should mention how much I loved that despite Kimi and Hana being skilled fighters, trained in the basics by their warrior father, brothers, and (ironically) Uncle, they are not nearly so talented or strong as the boys their age (although with training and dedication, the girls get there – but even trained, rest assured that they are not infallible amazonian women). The secondary characters are wonderful additions as well, and for every friend the sisters make on their trying journey, there are enemies, traitors, and betrayals aplenty.

So what else do I love about Sisters of the Sword? Well, the history is gorgeous, and fully detailed throughout the series, as are the Japanese names, words, and customs, and the different traditions. From ikebana to poetry, to the training and fight scenes, the Sisters of the Sword is an immensely readable series (I devoured these three titles in as many days). Also, can I say that I also loved the way that the societal roles of women were laid in this series? Although there is a rigid system of power, and women are not samurai or lords, they are trained in different ways of fighting, especially amongst the nobility. Ms. Snow writes this balance of power and tradition perfectly.

Through the Fire, book 3, ends with a dramatic, heartbreaking development, and with Hidehira’s cold steel grip closing on the shogun’s territory, the stage is set for an epic battle of retribution. I don’t know how many books are planned in this series, but I do know there is room for much, much more to come. And I, for one, cannot wait to see what happens next.

This is a series that I would recommend in a heartbeat to everyone: younger, middle grade readers that love adventure stories, as well as those readers yearning for a setting change from the typical western/caucasian homogeneity, and older readers those who remember the early days of reading Tamora Pierce, and Robin McKinley, or, yes, even Harry Potter. Although there’s no fantastical magic to this series (it’s straight-up historical fiction), these books just keep getting better. Absolutely, wholeheartedly recommended.

Reading Next: The Heir of Night by Helen Lowe