Book Review: More Than This by Patrick Ness 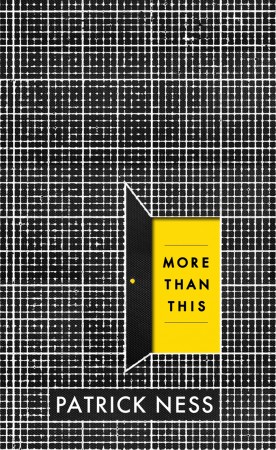 Title: More Than This

A boy named Seth drowns, desperate and alone in his final moments, losing his life as the pounding sea claims him. But then he wakes. He is naked, thirsty, starving. But alive. How is that possible? He remembers dying, his bones breaking, his skull dashed upon the rocks. So how is he here? And where is this place? It looks like the suburban English town where he lived as a child, before an unthinkable tragedy happened and his family moved to America. But the neighborhood around his old house is overgrown, covered in dust, and completely abandoned. What’s going on? And why is it that whenever he closes his eyes, he falls prey to vivid, agonizing memories that seem more real than the world around him? Seth begins a search for answers, hoping that he might not be alone, that this might not be the hell he fears it to be, that there might be more than just this. . . .

Why did I read this book: It sounded great. Plus, I really wanted to see what I thought of it – my history with Patrick Ness books has been an interesting journey. I thought A Monster Calls was the best thing since sliced bread and The Crane Wife was…not. I was curious to see where More Than This would fit in this spectrum. And yes, I know I need to read the Chaos Walking trilogy.

Here is the boy, drowning.

He is in the ocean and he feels the waves and the cold. He feels the rock when it smashes his skull.

He wakes up and he is naked, tired, thirsty and – unbelievably – alive. He is also back to the house where he lived as a child before the tragedy that hit his family. Before they moved to America.

He is all alone. The town is empty. Everything is covered under a layer of dust that alludes to the passage of time.

He wonders if this is hell.

And he wonders if there is more than this.

Here is the woman, writing.

She is staring at her screen because she doesn’t know how she is going to write this review. Any further elaboration on what happens next is one step too close to spoiler territory.

She does knows that what happens next is plot and plot is like a tiny island in an ocean of feels when it comes to More Than This.

More Than This is divided in four parts. The first part is the one where the main character wakes up in a (new?) world and he is all alone and doesn’t know anything, not even his own name – Seth – to start with. This is one of the most terrifying, claustrophobic, sad, bewildering and impressive bits of narrative that I have ever read.

The second and third parts attempt to shed some light on what the hell is going on and it’s when things get simultaneously simpler and more complicated when Seth meets two other characters, Regine and Tomasz, in this hitherto empty world. Are they real? Is Seth making them up because his mind is fragile and needs reassurance that he is in fact, alive? Are the answers they come to find, true at all?

The fourth part not only questions everything you thought you knew but wraps it all up in shiny golden Words of Emotion. I can’t stress enough how beautiful and hopeful the last two pages of this book are.

A conceptual book with heart.

It is inescapable, I am always coming back to these two main points: the narrative and the emotional core of More Than This. I think they are what make this book such a success.

Is this a dystopian post-apocalyptic setting or a contemporary novel or even a third option in all of its meta-glory (metafictional, metaphorical)? It doesn’t matter – it doesn’t matter at all in the end (or at least it didn’t for me) that there are no concrete answers apart from those YOU choose to have. More Than This: choose your own adventure.

It’s also interesting the way that Seth is aware of how stories are told, and how they can be constructed. So in a way this is also about narratives and stories and how to make sense of your own story and about things you tell yourself.

In the end, Seth does make his own choice, one that I thought was brilliant because it was so hopeful after so much despair. And it feels like what I am saying is that this book is all doom and gloom but it’s not. There is so much beauty in Seth’s memories – especially those romantic ones with the boy he loves. And in the end it is a hopeful book because it has a clear point of departure from Seth’s sense of isolation and his terrifying suspension on the right now to arrive at a place where different stories, different perspectives and the future have meaning and matter. The “more than this” in the title appear multiple times and in a variety of ways.

It is also a revelation the way that my reactions to the book emulate perfectly those of the main character as I felt what he felt in his journey: confusion, terror, acceptance, back to confusion and finally revelation.

And if the middle parts sag a little bit and if the story at times, felt overlong and protracted with a lot of “let’s talk about this later” when “later” is a luxury the characters obviously really didn’t have, these were not enough to detract from the powerful thematic core of the novel. I did have a big “Oh-No- NO moment” when it comes to Tomasz’s – a Polish mother tongue speaker – speech pattern. I am in completely agreement with what Things Mean a Lot’s Ana has to say about it:

“The last point I want to make is about the one aspect of More Than This that didn’t quite work for me. I’ll start by saying that I loved Tomasz and Regine — I loved them for who they were, I loved their friendship, and I loved the fact their being allowed to exist as more than lessons for the protagonist is so crucial to the story. However, my belief in Tomasz as a character was undermined by the fact that the way he spoke didn’t quite ring true for me. I don’t mean the Polish, which I’m not qualified to talk about, but rather the kind of mistakes he made when he spoke English. I say this not only as a fellow non-native speaker who learned English at around the same age as him, but as someone with a bit of a background in linguistics. I spent a year as a research assistant working on a project about non-native speakers learning English, and although speech patterns will be different depending on what your first language is, Tomasz’ came across as very caricatured to me, and unfortunately this kept pulling me out of the story.”

Here is the woman, writing.

She doesn’t know what else to say apart from: more, like this.

Notable Quotes/Parts: SPOILER WARNING. This quote below is my favourite thing about the book and I had to include it here but it spoils the ending! DON’T READ IF YOU DON’T WANT TO BE SPOILED

ARE YOU SURE YOU WANT TO CONTINUE?

Here is the boy, the man, here is Seth, being laid back gently into his coffin, the hands of his friends guiding him into place.
He’s uncertain what’s going to happen next.
But he is certain that that’s actually the point.
If this is all a story, then that’s what the story means.
If it isn’t a story, then the exact same is true.
But as his friends begin the final steps, pressing buttons, answering questions on a screen, he thinks that what is forever certain is that there’s always more. Always.

Reading Next: Picture Me Gone by Meg Rosoff

Over at Kirkus: The Clockwork Scarab by Colleen Gleason

Over at Kirkus: The Darwin Elevator by Jason M. Hough