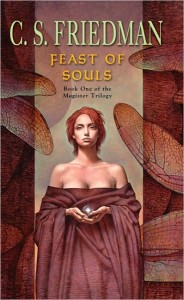 Stand alone or series:Book one in the Magister Trilogy.

Why did I read this book: I received book 2, Wings of Wrath, from the publisher and was instantly taken in by the intriguing blurb and awesome cover. And since I’m a stickler about reading all the books in a series in order, I rushed to my bookstore to find a copy of book 1.

Summary: (from amazon.com)
A new trilogy of epic adventure from one of the finest writers in modern fantasy

In Kamala’s world there is magic, but it comes at a terrible cost. Women who are able to wield their soulfire — the essence of life that every living creature has within — do so at the greatest cost, shaving seconds, days, even years off of their lives depending on the strength of the spell they cast. These witches die rarely of old age, but more often of their own spent soulfire. Feast of Souls opens with a tired witch, elderly already at 35 years old and who has promised herself never to use her magic again. But when a village woman comes to her hut with her plague-sickened child and her quiet daughter, the witch cannot help but use her power one last time and paying the ultimate consequence. From this experience watching the witch, old beyond her years, die saving her younger brother, Kamala is changed forever. She swears that she will not, she will never, use her magic and die. Instead of becoming a witch, she seeks out a mentor to become what no woman has ever become — a Magister.

Magisters, unlike their female counterparts are mysterious men, able to use as much magic as they wish without dying. They are all powerful and immortal, dabbling in Morati politics as they see fit over the years, playing games with human lives to pass their never ending lifespans. The relative stability of peace amongst the mortal realms is thrown however when the powerful King Danton’s son, Prince Andovan, slowly grows sicker from The Wasting — a malady that has no cure. The truth of Andovan’s illness is tied to the Magisters’ deepest secret, for the source of their power and the price of their immortality is their ability to use other Morati’s soulfire in the place of their own. These humans, ‘consorts’, waste away as the Magister bound to them uses their souls as their fuel, their magical food source. The Magisters discover that one of their kind has bonded inexplicably with the Prince, and the King’s Magister and consult Ramirus is pressed to discover who before the Prince dies.

While the Magisters are preoccupied with their politics, King Danton’s rage grows with the poison-tongued advice of his new Magister, and Prince Andovan struggles to find out the source of his illness, a darkness has taken over the land. Hundreds of years have passed since the last creature called Souleater was killed, and the protecting pillars to the north called the Wrath have been erected, guarding mankind from their return. But attacks, devastation and death return to the human lands, as these Souleaters have risen again, and Magisters, Royalty and Witch must band together against their threat.

Feast of Souls is a decadent dark fantasy novel. Blending a huge cast of characters, Ms. Friedman weaves a complex tale wrought with magic, emotion and adventure. There are familiar archetypes here — the defiant young Kamala, the noble prince, the disinterested and petty magicians, the worm-tongued advisor and the insane king — but Ms. Friedman manages to imbue her characters with such color and feeling that they never feel derivative. Kamala begins the book as coldly determined and power-hungry and grows into a much more relatable character — a far cry from the gentle-hearted healer-warrior women we are usually entreated to (in fact, those moments when she does question the ethics of sucking a human dry for her own life very nearly kill her). As the first female Magister, Kamala’s resolve to live at any cost — especially at the murder of others — is fascinating and a departure from the norm.

Similarly the Magisters are varied and complex in their motivations. The unforgiving power system in place in this novel allows for some wonderful variation on the behalf of those who use magic — Magisters range from bored to disinterested, juxtaposed against the witches who barter years of their lives for the benefit of others.

There are so many wonderful characters introduced in this novel, and all of them are beautifully developed, whether it be the beaten but unbroken Queen or the quietly reclusive, repentant Magister Ethanus, Master to Kamala’s apprenticeship. As the book is narrated completely in the third person omniscient, these characters and their thoughts add an impressive depth of perspective to the novel.

As to plotting, Ms. Friedman has an imaginative, deft hand as a storyteller, effortlessly juggling politics, battles, and character-driven subplots. While the book is set in the traditional western European medieval model world with the ominous Rise of The Dark as the backdrop plot, there is so much more going on with her numerous, vitally important subplots. Perhaps the most staggering achievement of Feast of Souls is how purposeful every scene fills. There is no filler in this book — Ms. Friedman’s prose is crisp and to the point, just as every scene in this book serves as an integral part to the novel as a whole. There are no wasted pages here, and I could not put the book down to save my life.

Feast of Souls is a fantastic, superior work of speculative fiction and I cannot wait to dig into Wings of Wrath! Highly recommended.

Notable Quotes/Parts: A brief interlude with the Queen Gwynofar, one of my favorite characters.

It took effort not to let all that show in her face. She did not want her son to see anything in her expression other than love and acceptance. It would accomplish nothing to have him understand the magnitude of his error, save to make him feel greater remorse than any human soul could bear. No, this must be a secret that she kept locked up in her heart, where no other person could share it…

“Mother.” He said it softly, gentling her from her reverie. “I risked Father’s wrath to return for a reason…The demons of the north. The ones they call Souleaters.” His expression darkened. “They are back.”

Souleaters. The legends all said they would return someday, for a battle that could bring about the end of the Second Age of Kings. Those same legends promised that ancient magics in the Protectors’ bloodlines would be awakened when it was needed. Was that the source of her dreams? Some ancient magic stirring now, responding to this threat preparing her and her children for the roles they were destined to play? If so, shouldn’t that same magic make her feel more confident about what was happening, shouldn’t it fill her with a sense f purpose, or, of…well, destiny? It didn’t. She just felt frightened.

Verdict: Feast of Souls is a rich, deftly plotted fantasy with beautifully complex characters. An imaginative start to what promises to be a sensational trilogy. Fans of dark fantasy, the Magister trilogy is for you.