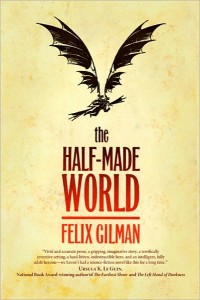 The world is only half made. What exists has been carved out amidst a war between two rival factions: the Line, paving the world with industry and claiming its residents as slaves; and the Gun, a cult of terror and violence that cripples the population with fear. The only hope at stopping them has seemingly disappeared—the Red Republic that once battled the Gun and the Line, and almost won. Now they’re just a myth, a bedtime story parents tell their children, of hope.

To the west lies a vast, uncharted world, inhabited only by the legends of the immortal and powerful Hill People. Liv Alverhyusen, a doctor of the new science of psychology, travels to the edge of the made world to a spiritually protected mental institution in order to study the minds of those broken by the Gun and the Line. In its rooms lies an old general of the Red Republic, a man whose shattered mind just may hold the secret to stopping the Gun and the Line. And either side will do anything to understand how.

Stand alone or series: Book 1 in a 2 book series.

How did I get this book: I snagged a copy at Book Expo America back in May.

Why did I read this book: Promising ideas with great recommendation from other readers.

In Felix Gilman’s imaginative universe, the world in only half-made, divided between East, with its towns, industry and millions of inhabitants and the unmade West. The East is vastly dominated by the people of the Line, whose 30-something sentient Engines control and oversee everything and aim to expand everywhere. Only the agents of the Gun (composed by individuals whose guns are demon-possessed) stand against the people of the Line in a centuries-old enmity.

That is, until the rising of the Red Republic Army, a few decades ago. Led by a general in pursuit of a human-based existent, and aided by the Hill people (mysterious immortal creatures who inhabit the unmade world) , the Red Republic thrived for a few years before being crushed by the Line. The general continued the resistance underground until he disappears from history and is thought dead.

Rumour has it though, that in the outskirts of the made world, in neutral territory, committed to a madhouse protected by a powerful spirit, the general still lives. His mind seems to have gone but somewhere deep inside he has a secret, an ultimate weapon which could bring down both the people of the Line and the people of the Gun.

Thus, starts the race to reach the general before the other side can get to him. The people of the Gun send one of their Agents, a man called Creedmoor, who has been working for the Gun for decades, to get to the Asylum, get the general and take him West. The people of the Line send one of their Linesmen, a guy named Lowry, one of their most resilient, dedicated, ambitious agents. Meanwhile, unbeknownst to both of them, and completely unaware of what is about to go down, a psychiatrist named Liv Alverhuysen is also making her way to the asylum as the new staff member.

The narrative alternate between the three characters and via their point of view, the world that Felix Gilman has created is revealed.

Creedmoor’s gives insight into the Agents of the Gun, how they are recruited and the demons that both control them and give them superhuman strength. Both his narrative and his personality resemble that of a typical Western character, the Man With No Name. He is the anti-hero with a mission, who might or might agree with said mission – and what would happen then if he rebelled against his Masters? Little is said about who are the demons that control the Agents of the Gun and why do they fight the Line but it is a fight they seem to be losing as their numbers dwindle. Creedmoor’s personality is chaotic; he thrives in causing mayhem even as he feels guilty with its outcome.

Lowry’s narrative falls on the other side of the spectrum: he is orderly, precise, determined, a perfect cog in the Line’s machinery, devoted to a T. He is also extremely ambitious in the hopes of being NOTICED by his superiors and will stop at nothing in his pursuit of Creedmoor and the General.

Right bang in the middle is Liv. Tired of her life in the East, tired of the horrible traumas she carries inside she sets out West for adventure. Her narrative is somewhat more passive – or at least it seems to be more passive – because in some points, she is a much more reactive character than an active one. But she is no less determined or knowledgeable than the other two characters. Between the chaos of Creedmoor’s and order of Lowry’s, Liv’s narrative is the balance, the middle ground that represents the change needed in this world. In her way West she is mostly an observer, hence the feeling that she is more of a passive character, but her observations are never left in a limbo and they are part of what helps her making the choice that she has to make eventually.

I recognised both Creedmoor’s and Lowry’s characters: I have seen the likes of them before and I could predict where their arc would lead them. I didn’t know what to expect from Liv: she never acted in a way I could predict and provided me with a lot of surprises including the very AWESOME decisions she makes in the final chapters.

Characters aside, The Half-Made World has a very intriguing even fascinating world-building and compelling descriptions of this “half-made world”. It was also frustrating at times, with its lack of answers, and above all its open ending but it also raised interesting questions:

how exactly is a world unmade? It is a world that is still being formed? Or is it a world that has yet to be named? Does the very existence of a world rely in naming it? I find that really interesting especially considering that the inhabitants of that part of the world still unnamed, the Hill Folks are so fairy-like in their descriptions. In that sense, naming things seems to have an interesting correlation with fairy tales and folklore: it is generally believed that once you know the name of a fairy you can summon and control it.

The unmade world also seems to be a world that exists outside time-keeping and I found this quote from Liv to be relevant:

She checked her golden pocket watch. It was still broken. It had broken days ago. It still ticked steadily, but some days the hands did not turn, and some days they spun so fast, the mechanism shuddered, and sometimes they turned backwards – the land out here was not yet ready to be reduced to regular time.

…especially when considering how the Line has brought industrialisation to the world and isn’t one of changes brought by the industrial revaluation, the regimenting of the hours of work determined by severe time-keeping?

Genre-wise, it is hard to define The Half-Made World but I would definitely not call it Steampunk. Although there are elements that could be found in Steampunk novels, it is a truth generally accepted in the Book Smugglers’ HQ that some Steam here and there, some quaint machinery, does not a Steampunk novel make: there’s simply too much Fantasy, too many Demons, too many immortal creatures doing magic, to make it so, in my opinion.

In any case, as you can probably tell by now, I enjoyed this book very much. In fact, the more I think about it the more I like it. However I do think that a couple of the characters were not extremely original, that there is a bit of a heavy handed message there when it comes to the heavy industrialisation of the Line and the action considerably lags in the middle to the point where I almost quit reading. I am very glad I persevered though; the ending was incredible, even with all of its openendiness and I so want to know what happens next.

In spite of these criticisms The Half-Made World is definitely a notable read of 2010.

After a while, he removed a volume of the Black File from his suitcases and passed his time studying it: the names and faces and the modus operandi and the long, long lists of crimes of his enemies, the enemies of all civilised people…he told himself this study was useful work, but in fact he just found that the fog of self-righteous loathing that rolled over him whenever he opened the Black File soothed his nerves

Reading next: Five Flavors of Dumb by Antony John