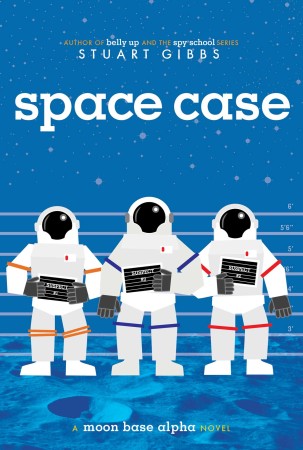 It’s a murder mystery on the moon in this humorous and suspenseful space adventure from the author of Belly Up and Spy School that The New York Times Book Review called “a delightful and brilliantly constructed middle grade thriller.”

Like his fellow lunarnauts—otherwise known as Moonies—living on Moon Base Alpha, twelve-year-old Dashiell Gibson is famous the world over for being one of the first humans to live on the moon.

And he’s bored out of his mind. Kids aren’t allowed on the lunar surface, meaning they’re trapped inside the tiny moon base with next to nothing to occupy their time—and the only other kid Dash’s age spends all his time hooked into virtual reality games.

Then Moon Base Alpha’s top scientist turns up dead. Dash senses there’s foul play afoot, but no one believes him. Everyone agrees Dr. Holtz went onto the lunar surface without his helmet properly affixed, simple as that. But Dr. Holtz was on the verge of an important new discovery, Dash finds out, and it’s a secret that could change everything for the Moonies—a secret someone just might kill to keep…

Stand alone or series: Book 1 in the Moon Base Alpha series

Life on the moon is supposed to be a blast. At least, that’s what NASA told Dash’s scientist parents when they recruited the couple and their family for a three-year mission on Moon Base Alpha (MBA, for short)–the very first settlement on the lunar surface. In reality, life for twelve-year-old Dashiell and the thirty-odd researchers, families and space tourists isn’t quite what was promised. For one thing, dehydrated food is never tasty (and often mislabeled). For another, sleeping in coffin-like stand-up beds that you have to be strapped into totally sucks. And don’t even get Dash started on the toilets–talk about uncomfortable.

NASA, politicians, and the adventure company that helped fund Moon Base Alpha don’t want you to know any of these things… nor do they want you to know that lunar scientist Dr. Holtz’s untimely death wasn’t an “accident”, but a murder.

The night that Dr. Holtz died, Dash was using the bathroom (revenge of the rehydrated chicken parm–don’t ask), and overheard the scientist talking on the phone about a breakthrough discovery that would change human life forever. Dr. Holtz was excited and almost euphoric–so Dash doesn’t buy it when MBA commander Nina says that Dr. Holtz’s midnight moonwalk was either a tragic accident, or that Holtz was depressed or suffering from some kind of psychological breakdown.

Although no one believes him, Dash is determined to uncover the truth–even if it means breaking the rules and risking his life.

I have a confession to make: I’m a sucker for middle grade science fiction. And it’s rare that I get to scratch this particular genre and age-range itch–middle grade fantasy, or science fantasy, is so much more common. Confession number 2: I’m a sucker for middle grade mystery/sleuth stories. This particular subgenre is far more prevalent than MG SF, but it’s always been one of my favorites. Having recently read an outstanding MG mystery novel (the outstanding The Tiara on the Terrace by Kristen Kittscher), I have been in the mood for more along the same tween gumshoe line–so when I saw Space Case, with its adorable cover and awesome-sounding plot, combining two of my favorite middle grade staples, I immediately bought the book.

I am delighted to report that Space Case did not disappoint! Mystery, actual space science, and intrepid investigative skills–ON THE MOON!–all collide in this smart, fast-paced middle grade adventure.

The most striking initial thing about Space Case is the strength of the narrative voice. Dashiel “Dash” Gibson is a twelve year old who isn’t exactly loving life on the moon–it’s certainly not the dream opportunity that NASA, the government, and everyone else on Earth kept pushing when they were recruiting the Gibson family–but he’s also trying his very best to see the positive aspects of life on a lunar rock. The food stinks, and the bathroom situation isn’t fantastic–but Dash never comes off as whiny or privileged. His narrative, rather, is one of controlled positivity, and that is awesome. I especially love the consideration Dash shows for others–he’s kind to his younger sister Violet, he has a strong and happy relationship with his parents, and when he’s assigned to show newbie Kira around the base, he does so with grace and tries to keep things upbeat despite his own homesickness. The relationships between Dash and other characters are also similarly well-written and pleasantly optimistic–other than the whole murderer on the moon part, of course. On a personal note, I felt an immediate kinship with Dash–he’s a kid from Hawaii (yay!), who moves from his home to a much smaller specialist environment because of his parents’ jobs and struggles with homesickness and living in a place that is very, very different than what he’s used to. In other words, as a narrator, Dash is incredibly sympathetic.

Of course there’s also the subject of setting and (for lack of a better word) worldbuilding. Space Case is set in a near future world, in which smartwatches have prevailed over larger smartphones, people are largely of mixed backgrounds and cultures (there’s a particularly cool point in the novel where Dash reflects on how he’s not used to seeing completely Caucasian people anymore, and how on Moon Base Alpha, most people are of mixed descent just like him), and where NASA can’t quite fund the space program on its own and so has opened up part of its resources to space tourism. This means that there are several different motivations at play in Space Case, including: the need for positive PR on the part of NASA and the US government means that a murder is hushed up; the desire to steal technology in order to fund a booming lunar tourism sector also contributes to sneaky mixed incentives; and much more. Other cool things in terms of worldbuilding included the sleeping arrangements, food situation, and challenges of low-gravity (running or even moving quickly is not easy).

Which brings me, finally, to the murder mystery itself. Ultimately, I wasn’t entirely convinced by the thoroughness of the mystery–though I did like how Dash, Kira, and others come about to the solution. There’s also a HUGE unexpected twist at the end of the book (the thing that Holtz was killed for) which is super cool, but really rushed. No spoilers, but I wills ay that I like the progression of suspects and evolution of evidence that takes place in this novel (complete with a few “gotcha!” moments), and the lead into the next novel (novels?) in the series.

You see, Patton and Lily are virtually the only pure white people my age I’ve ever met. Everyone else I know is a blend. Me and Violet for example (black mom, white dad). Or the Brahmaputra-Marquez family (Indian mom, Latino dad). Or Kira (Asian mom, black dad). Or Riley Bock, back on earth (Korean-Italian mom, Irish-Sri Lankan-Peruvian-Choctaw dad). The Sjobergs, however, are pure northern European Caucasian stock, with blond hair and blue eyes and skin so pale it looks like the belly of a fish. Mom and Dad have some friends like that form their generation, and my grandparents say it was pretty common when they were young, and I’ve been told that back when my great-grandparents were kids, people of different races couldn’t even marry each other in America. I know that’s true, but it seems impossible.