How did I get this book: ARC from the author

Why did I read this book: When Kelly Meding wrote to us last year, offering a copy of her debut UF novel for review, we jumped at the opportunity. Especially when we saw it blurbed by the likes of Patricia Briggs and Jackie Kessler.

Summary: (from KellyMeding.com)
She’s young, deadly, and hunted—with only three days to solve her own murder…

When Evangeline Stone wakes up naked and bruised on a cold slab at the morgue – in a stranger’s body, with no memory of who she is and how she got there – her troubles are only just beginning. Before that night, she and the other two members of her Triad were star bounty hunters — mercilessly cleansing the city of the murderous creatures living in the shadows, from vampires to shape-shifters to trolls. Then something terrible happened that not only cost all three of them their lives, but also convinced the city’s other Hunters that Evy was a traitor . . . and she can’t even remember what it was.

Now she’s a fugitive, piecing together her memory, trying to deal some serious justice – and discovering that she has only three days to solve her own murder before the reincarnation spell wears off. Because in three days, Evy will die again – but this time, there’s no second chance…

Evangeline Stone is dead. Ergo, she should not be awake, cold and naked on the coroner’s table in the city morgue. But somehow and for some reason, Evy’s eternal rest has been interrupted, and she only has three days to discover why. Unfortunately, Evy has no memory of the seven days worth of events leading up to her death. To complicate matters further, Evy has been resurrected in a body completely alien to her – on the plus side, she’s now taller, younger and curvier, but this new body she’s possessing has absolutely no combat training whatsoever. For a Hunter of “dredges” (paranormal creatures, such as vampires, shapeshifters, goblins, and fey) such as Evy, this poses some immediate problems. Without memory of what she’s supposed to do and only a name and address to go with her host body, Evy sets off into the night. Only, what Evy discovers is truly terrifying. She’s got to recover her memories to stop a violent, dangerous alliance between vampires and goblins, and to save her only friend, Wyatt Truman – and she only has a 72 hours to do so.

When I first read the synopsis for Three Days to Dead, I loved the time-limit premise heroine Evangeline Stone had to work against. The beginning of each chapter includes a 24-esque countdown clock, detailing how much time Evy has left before kicking the bucket. The constraint means that there’s little time for screwing around, and the plotting for Three Days to Dead reflects that urgency – it’s a fast-paced, immensely readable novel. The world that Ms. Meding creates in this debut novel is perhaps a bit familiar, populated with the usual fanged, furred and fey suspects, but with enough of a spin to make it seem if not completely fresh, at least attention grabbing. In Evy Stone’s city, humans are the dominant race, and all the paranormals are “dregs.” Though some are friendlier than others (bridge trolls, for example, are friendlier than vampire or goblin half-breeds), humanity has Triads, or a trio of human hunters led by a “handler,” to protect them. Before Evy’s first death, she was a member of one of the more formidable Triads with friend Wyatt Truman as her handler. I loved the concept of these independent teams all controlled by some formidable, unseen group of hardasses (referred to throughout the book by Evy as simply, “The Brass”), and the palatable tension between the different races of creature.

In terms of characters, Ms. Meding does a decent job. Evy Stone is one of the tougher brands of UF heroine, an orphan from birth, passed from foster home to foster home before being singled out for recruitment by the hunters for her lack of emotional and familial ties, as well as her tendencies to violence. I was a bit put-out with the emergence of the amnesiac UF hero trope (see Additional Thoughts below for more), and there are a number of eerie similarities between Three Days to Dead‘s Evy and Tainted‘s Lily Carlisle (an Urban Fantasy novel released around the same time last year by Julie Kenner). Add to that the fact that when I was reading Evy’s voice, she never came across as a completely believable character, especially in terms of her street-tough upbringing and background as a hunter. She has a conscience, she has mushy feelings for Wyatt, and overall, she seems far too soft to pull off true badass status. I liked Evy, but I couldn’t really believe in her as a character. There’s also the matter of an Awkwardly Timed Love Story between Evy and Wyatt, which is a pet peeve of mine. Hookups and sexual distractions when in the midst of great peril tends to take away from the realism of a novel. Wyatt is a fine hero character too, but again suffers from the same lack of credibility. As Evy’s handler, Wyatt also is a human mage with serious powers and a reputation as an emotionally distant badass, even to his own Triad. However, this is something that readers are told throughout the novel, but not ever something we see for ourselves. I suppose that’s my biggest gripe with Three Days to Dead – in many ways, it almost felt like it should be the second novel in a series. There’s so much history between Wyatt and Evy that we never get to see, and instead are simply told. The character development, and my reading experience, was hampered greatly due to this weird discrepency.

All that said, however, I still very much enjoyed Three Days to Dead. There’s a lot of potential for a great series here, and with time, hopefully these characters will grow into more believable molds. I’ll definitely stick around for As Lie the Dead, book 2, later this year.

Notable Quotes/Parts: Check out the excerpt via Random House’s widget below:

Additional Thoughts: The Amnesiac Urban Fantasy Hero. S/he’s ubiquitous. Here are a few other UF/paranormal romance that use this familiar trope, for better or for worse… 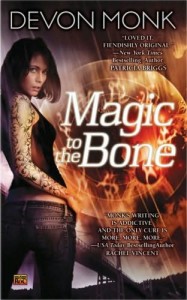 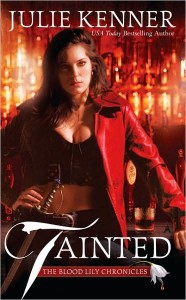 Verdict: Though not without its flaws, Three Days to Dead is an immensely readable book with a whole lotta potential. Recommended for the Urban Fantasy fan.

Reading Next: Nice Girls Don’t Have Fangs by Molly Harper