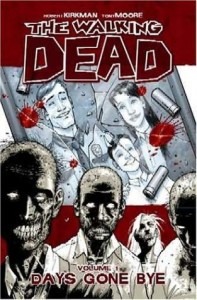 Why did I read the book: It was part of my homework for the Zombie Appreciation Week.

Summary:An epidemic of apocalyptic proportions has swept the globe, causing the dead to rise and feed on the living. In a matter of months, society has crumbled: There is no government, no grocery stores, no mail delivery, no cable TV. Rick Grimes finds himself one of the few survivors in this terrifying future. A couple months ago he was a small town cop who had never fired a shot and only ever saw one dead body. Separated from his family, he must now sort through all the death and confusion to try and find his wife and son. In a world ruled by the dead, we are forced to finally begin living

The Walking Dead is a black and white monthly comic series that started being published in 2003. The graphic novel I review today, Days Gone Bye is the collection of issues #1 to #6 and the opening act of a zombie apocalypse and what happens to a group of survivors.

The story opens with small town police officer Rick Grimes and his partner Shane in a shoot-out with a bandit. Rick is shot and next thing he knows, he is waking up in a hospital bed a month later. He is all by himself. When he tries to get out of the bed he falls and calls for a nurse. No one comes. He walks around but the halls are empty. He goes to the elevator and there is a corpse there. He runs to the cafeteria and the room is taken with….what? Things that are alive but really…shouldn’t. He runs away and outside everything is eerily deserted. He sees an abandoned bike – or so he thinks. There is a skeleton next to it, except, the skeleton is still somehow moving. Completely horrified, shocked, in tears even, Rick steals the bike and cycle to his home to try and find his wife and son. But his house is empty and pillaged and he has no idea what happened to his family. He is knocked unconscious by a young boy named Duane Jones (how strange that I immediately recognise this name for what it is? A homage to Romero’s movie Night of the Living Dead. Duane Jones is the name of the actor who played Ben in the 1968 movie) who thinks he is a zombie. Duane and his father have been living next door and they explain to Ben that while he was in coma, plague of sort has spread all over bringing the dead back to life and that he has been waiting for the authorities to sort things out. He tells Rick that the government has told people to go towards the big cities and Rick hopes his family has made it to Atlanta.

He breaks into the police station, gets some guns and a car and drives away. Upon arriving in Atlanta , he is welcomed by a sight that crushes his hopes: 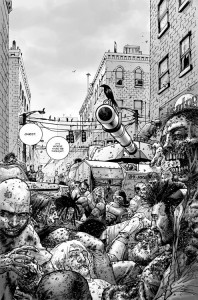 The entire city is taken by the walking dead and he is nearly eaten alive. He is saved by a young man called Glenn to takes him to a survivors’ camp. He then joins the group living in the outskirts of the city as they try to survive and this is when the horror truly dawns on Rick. The world IS overrun with zombies. There is no government, no one that will come and rescue them – at least not immediately. They have to make do with what they have. And we see this group going back to the basics – one very effective, blunt sequence has some of the women going to the stream to do the laundry while the men go hunting. One of the women voices that it doesn’t seem fair to her while another says she doesn’t trusts he husband with a washing machine plus she doesn’t know how to shoot. It just seems the natural order of things….there is of course, dissention, but they all seem to group around Rick as a natural leader. And they need to make a choice on whether to stay put, where they are, and wait for rescue or move to a more secure location and risk not being found by the rescue parties if they ever come.

And THIS IS IT. I don’t believe there will be an end to this plague. This is the world they live in now. With life and death balancing with every move they make – even turning around the corner of a caravan could prove deadly. How does one survive that without losing all hope and sense of humanity?

Having just watched a marathon of George A. Romero’s movies, it is easy to observe his influence here. Starting with the obvious fact that the Walking Dead is not really about Zombies (as neither were Romero’s movies) – it is about the human interactions and how they would survive in a post-apocalyptic world. Even the zombies themselves are reminiscent of Romero creatures: of the slow variety and that can only be killed by having their brains destroyed. And their bite can make one into a zombie. I think it is even more devastating and horrific that such slow, brainless creatures can be so deadly.

As for the art itself – I thought the black and white to be much more effective than if it was coloured. It speaks of a bleakness and emptiness that not even the reddest bloodshed would have been able to convey. Whenever there was a screenshot of a horrified Rick close to tears upon seen a truly shocking sight, I felt close to tears myself. Now, this is art that is capable of inspire all sorts of emotional response from the reader: from disgust to despair, from sadness to even a little bit of happiness and hope. Needless to say, I LOVE it.

Notable Quotes/ Parts: The opening pages were awesome. The first scenes with Rick in the empty hospital, his first encounter with the zombies, the silence, the desert streets, the corpse close to the bike , all happening at once to someone just waking up from a coma. I mean, can you imagine?

Rating: 10 – Perfection. I was conflicted about how to rate this as I am told the volumes only get better. But I honestly felt completely wowed by this one and if the subsequent volumes are better….then ultra-wow.

Reading Next: Road Trip of the Living Dead by Mark Henry