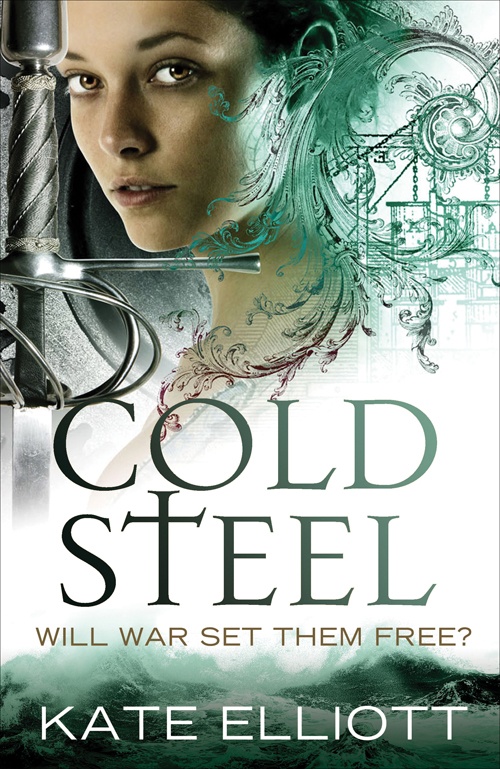 Trouble, treachery, and magic just won’t stop plaguing Cat Barahal. The Master of the Wild Hunt has stolen her husband Andevai. The ruler of the Taino kingdom blames her for his mother’s murder. The infamous General Camjiata insists she join his army to help defeat the cold mages who rule Europa. An enraged fire mage wants to kill her. And Cat, her cousin Bee, and her half-brother Rory, aren’t even back in Europa yet, where revolution is burning up the streets.

Revolutions to plot. Enemies to crush. Handsome men to rescue.

Cat and Bee have their work cut out for them.

Stand alone or series: Book 3 in the Spiritwalker trilogy

Why did I read this book: I am a big fan of Kate Elliott’s Spiritwalker books, and Cold Magic (the conclusion of the trilogy) is one of my most highly anticipated books of the year.

WARNING: This review contains unavoidable spoilers for Cold Magic and Cold Fire. If you have not read books 1 and 2 in the series and want to remain unspoiled, look away!

On the shores of the Taino Kingdom, Catherine Bell Hassi Barahal has survived the Wild Hunt and her sire’s promise to stake his claim on Cat. Instead, powerful fire mage and Taino cacique Queen Anacaona’s blood fed the hunt, and Cat’s sire has claimed Andevai, Cat’s husband, for his prisoner and prize. Accused of the murder of Queen Anacaona by her son and heir, Prince Caonabo (who also happens to be Cat’s cousin Beatrice’s husband and new ruler of the Taino), Cat faces a great deal of trouble. General Camjiata has allied with the Taino and longs to bring Cat and Bee around to his side in his war on Europa; Fire Mage James Drake (still smarting from being bested by Andevai) will stop at nothing to claim revenge by threatening to use Cat as his catch fire (and unwilling concubine); and most importantly, Vai remains trapped in the spirit world – and only Cat is determined and powerful enough to save her husband from the clutches of her power-hungry and twisted father.

With the help of cousin Beatrice and half-brother Rory, plus a few other friends (and not so friendly acquaintances), Cat faces the impossible task of saving her husband, clearing her name, and making a stand for everything she believes in as war strikes with a vengeance. Along the way there are dragons, seas made of smoke and dreams, ill-fitting dash jackets, blood, magic, and love.

The third and final novel in the Spiritwalker trilogy, Cold Steel clocks in at just over 600 pages – while similar in length to the first two books, this third novel feels like a much larger story because of its scope and the conclusion of the series. There is action aplenty in this volume, ranging from the Caribbean Antilles isles of Taino, to the frightening time and distrance distorting realm of the spirit, to the great ice glaciers of the north and the unflinching rule of the Cold Mages that control much of Europa. In terms of setting alone, this third book brings all the different realms and people of the first two novels into play, weaving allies and enemies into the storyline as Camjiata amasses his troops for war against the Mages and their antiquated and oppressive rule. Per usual, Kate Elliott’s imaginative scope is spot on in Cold Steel, expanding upon the beliefs of people/cultures, hierarchies, and power structures explored in Cold Magic and Cold Fire.

In particular, I love the different examinations of the roles of women in the different cultures across the books. Raised as a Hassi Barahal – the (in)famous Phoenician clan of merchant spies – Cat and Bee are powerful, educated, and trained young ladies. Though they have pushed the accepted status quo as much as possible by attending university and educating themselves, early on in their young lives they have acquiesced to the wishes of their family. The beautiful Bee meets her destiny of being married off for money and power, while Cat has been tricked into marriage of Four Moons House mage Andevai (per the usual patriarchal dictation of marriage and power in Europa). However, in the Taino empire, we see that the Cold Mage-ruled way of doing things in Europa is not how everyone else perceives of and obeys power. Indeed, the ruler of the Taino was a female, and women there are allowed to make their own sexual and marital decisions (not to mention hold power in their own right). This knowledge challenges and changes both cousins – especially Bee, who becomes determined to harness her own magical dreaming ability and carve a life for herslef independent of being sold or controlled by a husband that seeks only to use her power for his own gain. As for stubborn, headstrong Cat? She confronts the problems of power head-on in this book, even with her much beloved husband – who makes the mistake of underestimating and even acting condescending towards his wife.

While the worldbuilding and politicking is fantastic, the other major draw to these books in my opinion lies with the characters. At first glance, heroine Cat is perhaps a bit of a cliche; as Kate Elliott said in her Inspirations and Influences post, Cat is an orphan, she’s plucky, powerful, and stubborn to a fault. At the same time, she’s also driven entirely by the love she has for her friends and family, and she is not a perfect character – I love that she is not rescued by her lover. (Or at least, she’s not rescued by the hero character ALL the time.) (Plus, she returns the favor multiple times.) More than that, though, I love that we get a direct conflict in this book in which Cat’s physical attraction to her husband and her willingness to forgive him and forget his arrogant jerk behavior is called into question with dramatic repercussions. On that note, Vai has his own serious flaws, what with his excessive vanity and haughty manner – but underneath the bravado and self-importance there is love and empathy, making Vai a stronger, better, more well-rounded character than the classic unfailing hero. My favorite character, however, is Beatrice. Over the arc of this trilogy, Bee grows the most, in my opinion, and I *love* her storyline so very much. Bee begins the series seeming to fit the standard beautiful, sweet younger cousin to Cat’s feistiness; Bee was the girl who would inevitably be pawned off by her family on men who would take advantage of her beauty and ability to walk the dreams of dragons. It would have been SO EASY to settle Bee down with an equally sweet and kind young man or otherwise stereotype her character. THIS IS NOT WHAT HAPPENS. And I love that, so so so much. Bee defies stereotypes so wonderfully in this third book and by its end has become a powerful, independent woman that is comfortable with who she is and what she wants.

While there is a lot to love about this book and the trilogy overall, I do have one significant criticism for this book: that is, how long it takes to get things off the ground (it’s about 200 pages or so before Andevai and Kat are reunited). Compounding the issue is the fact that Kat is forever being torn away from the side of Bee and Rory and her loved ones, in a neverending state of running away and cutting her poor palms (which must be quite scarred and bloodied and sorely infected by this point) to use her blood to open doorways between worlds. There’s also a high degree of repetition, as well as a plethora of small entertaining scenes that ultimately have no bearing on the overall story (see dash jackets scenes). Other characters also feel a bit caricaturish, lacking the depth of the main trio (Drake, in particular, feels one-note, and even Cat’s brother Rory – while adorable and hilarious – also feels a bit flat). Your mileage may vary, but despite the wonderful way the book concludes, I felt like this novel could have been easily pared down. I could have done without some of the many scenes discussing Andevai’s dash jackets or grooming habits, for example.

At the end of the day, though, with all these criticisms said, Cold Steel is still a damn good book and a fittingly grand end to the Spiritwalker trilogy. I thoroughly enjoyed this third book and absolutely recommend it – both the book, and the trilogy overall.

I was serving drinks to the customers at the boardinghouse when a prince came to kill me.

I had my back to the gate and had just set a tray of empty mugs on the bar when the cheerful buzz of conversation abruptly ceased. Behind the counter, Uncle Joe finished drawing a pitcher of ale from a barrel before he turned. His gaze widened as he took in the sight behind me. He reached under the counter and set my sheathed sword next to the tray, in plain view.

As with most family compounds in the city of Expedition, the boardinghouse’s rooms and living quarters were laid out around a central courtyard. A wall and gate separated the living area from the street. Soldiers stood in the open gate, surrounding the man who intended to be the next ruler of the Taino kingdom.

Prince Caonabo had a broad, brown face, and his black hair was almost as long as mine, although his fell loose while I confined mine in a braid whose tip brushed my hips. He wore white cotton cloth draped around his body much like a Roman toga, and simple leather sandals. Had I doubted his rank because of the plainness of his dress, I might have guessed his importance from the gold torc and gold armbands he wore, as well as the shell wrist-guards and anklets that ornamented his limbs and the jade-stone piercing the skin just above his chin.

The prince raised a hand, palm up. A flame sparked from the center of his palm, flowering outward as a rose blooms.

“Catherine Bell Barahal, you have been accused in the council hall of Expedition of being responsible for the death of the honorable and most wise cacica, what you call a queen, she with the name Anacaona. As Queen Anacaona’s only surviving son, and as heir to her brother, the cacique, I am required to pursue justice in this matter.”

I met his gaze. “I would like to know who made that accusation.”

“I made the accusation.”

He knew what I had done.

Additional Thoughts: Make sure to stop by and take a look at Kate Elliott’s Inspirations & Influences post for a chance to win a copy of Cold Steel!

Rating: 7 – Very Good for the book; 8 – Excellent for the trilogy overall

Reading Next: Angel with the Sword by C.J. Cherryh

Over at Kirkus: FUTURE SHOCK by Elizabeth Briggs