Yesterday we gave you a good long look at the evolution of zombies in the film genre, highlighting some pivotal films. I could wax poetical all day about Romero’s movies, but the zombie movie has a lot of other goodness to offer. Instead of repeating what I talked about yesterday (or during Halloween Week for that matter), I’ll do a clip montage of some of my very favorites, by category.

Karen, Night of the Living Dead

When there’s no more room in hell…, Dawn of the Dead (Or if you’re curious, check out ; contains spoilers, but is petty solid).

Bub, Day of the Dead (my favorite has to of course be this final scene with Bub, but only click if you’ve seen the movie or do not mind being spoiled)

Big Daddy leads the zombie attack, Land of the Dead

28 Weeks Later (I prefer it to 28 Days, and this opening sequence is awesome although unfortunately truncated)

Alice, Resident Evil (that last scene is pretty badass too)

Dawn of the Dead 2004 Introduction (No embedding allowed, sorry!)

Don’t Stop Me Now, Shaun of the Dead

Tarman, Return of the Living Dead (or creepy pervert sounding Freddy and the classic line; or watch Trash get wasted)

The Lawnmower Scene, Dead Alive (also check out the “I kick ass for the lord!” scene, or the zombie sex scene)

The Splinter Scene, Zombi (aka Zombi 2)

Intestines…, City of the Living Dead

Shark vs. Zombie, Zombi (aka Zombi 2)

Best of Clips from Hell of the Living Dead (aka Night of the Zombies, aka Virus, aka many other names that all boil down tot he same thing: one of the worst movies ever made)

Nazi Zombie eats himself, Hard Rock Zombies (again, one of the worst movies ever made…but strangely watchable. I mean, just check out this clip. Or this one.)

(I don’t know why Nazi Zombies are so appealing. They simply are.)

I think that’s about it from me for now. I’ve just made myself want to watch all these movies immediately!

In the meantime, look out… 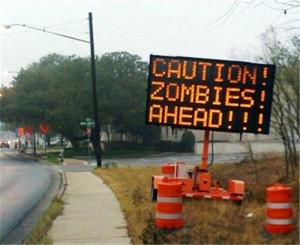 Watchmen Weekend: Aboard The Black Freighter