January means the return of all good things–and LOST is back tonight!!!!!!!!

Tonight at 9/8 central is a two-hour premiere (not counting that stupid clip show, which begins at 8/7c if you’re interested) with episodes titled “Because You Left” and “The Lie”.

THE REMAINING SURVIVORS START TO FEEL THE EFFECTS CAUSED BY THE ISLAND BEING MOVED, AND JACK AND BEN BEGIN THEIR QUEST TO REUNITE THE OCEANIC 6 – ALONG WITH LOCKE’S BODY – IN ORDER TO RETURN TO THE ISLAND, ON THE SEASON PREMIERE OF ABC’S “LOST”

After Oceanic Air flight 815 tore apart in mid-air and crashed on a Pacific island, its survivors were forced to find inner strength they never knew they had in order to survive. But they discovered that the island holds many secrets, including a mysterious smoke monster, polar bears, housing and hatches with electricity and hot & cold running water, a group of island residents known as “The Others,” and a mysterious man named Jacob. The survivors have also found signs of those who came to the island before them, including a 19th century sailing ship called The Black Rock, a downed Beechcraft plane from a failed drug run, the remains of an ancient statue, as well as bunkers belonging to the Dharma Initiative — a group of scientific researchers who inhabited the island in the recent past. They also encountered a freighter stationed off the island that some thought would lead to their rescue, but ultimately almost caused their extinction.

With only 34 original hours left until the final episode airs in 2010, Jack, Kate, Hurley, Sayid, Sun and Claire’s son, Aaron – otherwise known as the Oceanic 6 – have been rescued and continue to try and pick up the pieces of the lives they knew before the crash and to perpetuate the lie concocted to hide the truth of what really happened. But Jack and Ben must convince all of them to return to the island in order to save those left behind. This will prove quite a feat since Jack is still wrestling with his addictions, Kate won’t speak to him, Hurley is in a mental institution, Sayid is an assassin and Sun blames Jack for Jin’s death when the freighter exploded. Adding to their worries is the fact that they also have to take the body of Jeremy Bentham – aka Locke — with them in order to make things right with the island. But locating the island may prove even more difficult since Ben moved it. It’s not just a question of where it went, but when. Back on the island, the survivors who were left behind begin to play out the surprising events that inevitably lead to Locke’s death.

In the first part of the season premiere, entitled “Because You Left,” the remaining island survivors start to feel the effects of the aftermath of moving the island, and Jack and Ben begin their quest to reunite the Oceanic 6 in order to return to the island with Locke’s body in an attempt to save their former fellow castaways. In the second part, entitled “The Lie,” Hurley and Sayid are on the run from the cops after stumbling into trouble at the safehouse; the island survivors come under attack by unknown forces; and an old friend offers some shocking advice to Kate in order to ensure that “the lie” remain a secret.

“Because You Left” was written by Damon Lindelof & Carlton Cuse and directed by Stephen Williams.

“The Lie” was written by Edward Kitsis & Adam Horowitz and directed by Jack Bender.

Here are a few official promotional photos for the premiere tonight (more images available at Lost-Media.com: 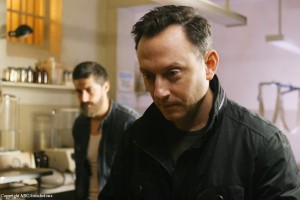 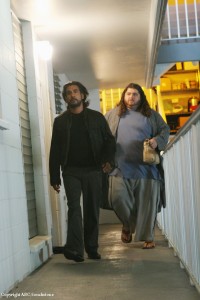 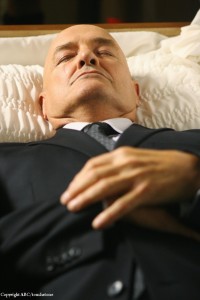 Want more? Check out the always reliable Dark UFO (aka Andy)’s collection of spoilers in his Season 5 Episode Guide. Who else is excited?!?!?!?!

On another fangirl squeeee! note, Battlestar Galactica also is back as of last week! How about poor Dualla (even though I never liked her)? Or that mindfrak with Starbuck?! Or, of course, the reveal of the fifth?!? Gods, I love this show!

Only 9 more episodes to go before the end… Here’s the preview for this Friday’s episode, “A Disquiet Follows My Soul”:

BookExpo America, Or: How We Learned to Stop Worrying and Love the Hundreds of Pounds of Books – Day 0/1