In conjunction with Angry Robot, the new global publishing imprint from HarperCollins, 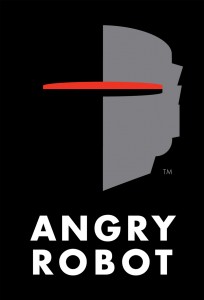 we are pleased to present five daily excerpts from their upcoming Fantasy novel, Triumff by Dan Abnett (which sounds gloriously good and we will be reviewing in the future): 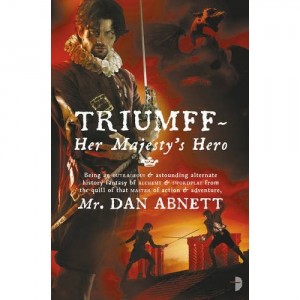 Being the true and authentick account of the expl’ts and
incid’nts following the re-turn to London
of
Sir Rupert Triumff, adventurer,
from his celebrated Voyage of Discovery to the Meridional Climes.
Never before made publick.
-*-
Given in this, my hand, this XXIIIrd day of Aprile,
XX hundred and X Anno Domini,
in the splendid reign of the thirtieth Gloriana.
Vivat Regina!
Wllm Beaver, esq.

Editor’s Notice to the Great Variety of Readers

For those readers unfamiliar with the affairs and nature of the Anglo-Hispanic Unity, care has been taken to furnish Master Beaver’s manuscript with footnotes and commentary to make all such matters comprehensible.
However, this editor has been charged with making the following basic facts known from the outset. The Anglo-Hispanic Unity, the longest-lasting and most powerful Empire ever to arise upon this terrestrial stage, was founded in the year Fifteen Hundred and Seventy-Five, following the marriage of Queen Elizabeth the First of England to King Philip the Second of Spain. Said union of power and lands, including as it did the virginal tracts of the New World, soon eclipsed all other nations of the globe, and has persisted since, through a worthy line of potent female monarchs, all styled “Elizabeth Gloriana”.
The other matter that helped to preserve the pre-eminence of the Unity was, of course, the Renaissance, which thoroughly reawakened the Sublime Lore of Magick, dormant since Antiquity. The schools and employment of the Esoteric Arte of Magick were monopolised by the Church and Church-Guilds of England, and ensured the Unity’s absolute command and superiority over all the World, especially the British bits of the Unity.
This didn’t please the Spanish bits very much at all. But that’s another story.
Part of this one, in fact.

The Persons of the Story

& in addition, divers servants, ladies and lords, as well as some personages I might have forgotten in this compilation, along with copious hautboys and tapers, and fanfares on all entrances and exits
the setting is the present day
staged in the modern style
Vivat Regina!

The First Chapter
Which is set upon St Dunstan’s Day

It had rained, furiously, for all of the six days leading up to St Dunstan’s Day.

End of Excerpt #1. Come back tomorrow to read excerpt #2. And don’t forget to check out the book’s page: Triumff by Dan Abnett

Today, we are being interviewed by….