Who: Jessica, who writes the fabulous Racy Romance Reviews blog, a new (and very welcomed) addition to the blogsphere.

Jessica is an academic professor that writes not only incredibly in-depth reviews of Romance Novels but also the most amazing and smart articles with reflections and commentary about the genre. With a feminist tone and a quirky sense of humour, Jessica and her blog are on our every day MUST visit list.

Please give it up for Jessica!

A Candle for Nick, by Lorna Michaels
(and a rotten tomato for his selfish mother)

Thanks to Ana and Thea for inviting me to write a guest post. It’s my first one ever! 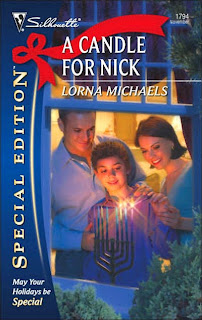 Since I celebrate Hanukkah, I thought I would read a Hanukkah romance this month. As you might expect, finding one was no easy task. I was thrilled when I found Lorna Michaels’ A Candle for Nick, a Silhouette Special Edition published in 2006. In this book, florist Mallory Brenner faces a mother’s worst nightmare: her only child, Nick, has leukemia. Mallory’s husband Dean passed away three years prior. It just so happens that the best pediatric oncologist in the U.S. is Dr. Kent Berger, Mallory’s old flame, and, unbeknownst to him (or Nick), Nick’s biological father. Determined that her son has the best possible care, Mallory decides to seek treatment from Kent without disclosing his relationship to Nick.

Kent, a very successful, wealthy, and handsome man, is now single, having been briefly married to a supermodel type who didn’t want children (evil, evil woman!). He has never forgotten sweet girl-next-door Mallory, and, when she reappears, the old desires are quickly rekindled.

Nick’s illness, his treatment, and the stresses it places on him and Mallory are dealt with knowledgeably and sympathetically. The reader comes to understand not just the stresses of this terrible and unpredictable illness, but also the resilience of the children, families, and health care providers who fight it. Nick is always a real, three dimensional child, one who happens to have cancer. He is never just a “cancer victim.”

The author portrays the Jewishness of the hero and heroine in a very similar fashion. They are just people who happen to be Jewish. It’s pretty rare to find a romance with a Jewish hero or heroine (never mind both), but when I do, they tend to either make an issue out of the Jewish identity or ignore it. For example, it’s a major plot and character issue for Gareth in Liz Carlyle’s Never Deceive a Duke, and it’s essentially irrelevant to Dan’s character in Megan Hart’s Dirty. I think both kinds of narratives are important, but this is the first romance I have come across in which a heroine’s Jewishness was both important and nontroubling.

Mallory is, in fact, a daughter of a rabbi and a religious Jew (those who identify ethnically as Jewish, but are nonobservant are “secular Jews”). Many non Jews are aware of only one Jewish holiday or tradition: Hanukkah. It is often thought that the importance of Hanukkah in Judaism parallels that of Christmas to Christians, but, in fact, although Hanukkah has attained great ethnic and secular importance (especially in the US), it is, in religious terms, a minor holiday. For religious Jews, other rituals are more significant, and I really appreciated the fact that, while the title and cover image reference Hanukkah, A Candle for Nick introduces readers to some of these other observances, such as Rosh Hashanah (Jewish New Year), Yom Kippur (Day of Atonement), the lighting of Shabbat candles, and memorial observances of the death of a loved one (Yartzeit).

The relationship between Kent and Mallory is natural and compelling, and as a reader I did root for them. However, they both engaged in behavior that I found so stunningly unethical that it distracted me from truly enjoying this book.

I’ll take Kent first, since his transgression was the less serious one. Should a pediatrician engage in sexual relations with a patient’s mother? Might this cloud his clinical judgment? Is the mother of a potentially dying child in a position to refuse such overtures? My answers are No, Yes, and No. While their past sexual relationship, and Mallory’s willingness, mitigate the conflict, I felt that a more honorable man would have waited until Nick’s illness resolved before making the moves on his mother.

Also, despite the fact that several people comment on his resemblance to Nick, it doesn’t occur to Kent to check the boy’s – his patient’s — birth date until almost the end of the novel. This is our brilliant physician?

But my strongest censure is reserved for Mallory. First of all, Mallory hid her pregnancy from her lover and married another man. Why? Because he didn’t return her phone call. Really, that’s it. So we have the Secret Baby and the Big Misunderstanding: not my two favorite romance tropes, to say the least. But since they happened ten years prior to the action of the novel, when Mallory was quite young, I could let those pass.

However, as unconscionable as it was, in my opinion, to deprive Kent of his son (and the reverse), Mallory’s present day determination to use Kent for his medical prowess while keeping him in the dark about his genetic relationship to his patient is unbelievably selfish and stupid. When it becomes apparent that chemo alone will not cure Nick, a donor must be found for a bone marrow transplant. Despite finding no matches in the donor registry, Mallory still refuses to reveal Nick’s paternity… even though doing so might save his life. I think we can add another romance trope to our list: the TSTL heroine.

One thing I thought this book revealed very well was how “one lie begets another”, to quote Mallory’s father. Mallory has to lie to so many people – her in-laws, the nurses, and many others – to keep this exhausting charade going. Lying can become a habit, a go to strategy for making things go your way. Mallory even lies when there is no reason to. For example, when Mallory and Kent begin dating, she worries about what his other patients’ parents will think about his Jaguar being in the apartment parking lot. She wonders, “Why hadn’t she lied and told [them] she and Kent were cousins?” Why not, indeed?

Novelist Milan Kundera has written that

“Moral judgment is not ignored or banished or declared moot but suspended, in the way that, say, a bridge is suspended: via tension between opposites, a tension that, at least for the term of the story itself, holds at bay our impatience to make up our minds.”

And I think this is true. The world of the novel is a world where we can explore all kinds of characters without prejudgment. Despite what this review suggests, I actually love romances with morally flawed heroes and heroines. One of my favorite heroines this year was Gigi, of Sherry Thomas’s Private Arrangements, a champion manipulator and liar. And one of my all time favorite heroines is the demon Lilith, of Meljean Brook’s Demon Angel, a pathological liar who spends most of her time trying to kill the hero. But what makes those heroines work for me is that they grow and change during the course of the novel. They may not become morally perfect – Lilith certainly doesn’t – but they recognize that their bad behavior has negative consequences for other people, and this recognition often tears them apart inside.

They also work on repairing the relationships they have broken. I think that when romance readers talk about “groveling”, this is what we mean: people do all kinds of awful things to one another. And in romance, those awful things tend to be really awful (that’s part of what makes them exciting to read about). But it’s the aftermath that matters even more: how is justice restored in the relationship? How is mutual respect achieved? Is it believable, moving, compelling?

Mallory never admits that she was wrong. She never even says “I’m sorry.” I was disappointed in her, and disappointed in the way Kent and her parents let her off the hook. Sometimes the most loving thing we can do for the people in our lives is to hold them accountable to the moral views they themselves profess to hold. When we get angry with them, we are saying, in effect, “You are better than this.” Unfortunately for us, Mallory isn’t.

Next on Smugglivus: Aidan Moher of A Dribble of Ink