Who: Heather, the pioneering gal behind the dedicated Science Fiction Romance site, The Galaxy Express!

Heather runs a true, dedicated niche blog–and though you might think Science Fiction Romance is too narrow a genre classification to warrant such devotion, you could not be more wrong. Heather’s blog provides awesome insights into the branding and marketing of the genre (see her recent guest article) as well as giving in-depth reviews of SFR books and profiles/interviews of SFR authors. Truly, this is an awesome site, and one we highly recommend!

A round of applause, dear audience, for Heather! 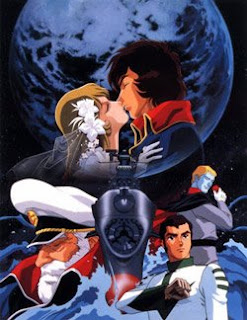 My name is Heather Massey, and I’m the conductor for The Galaxy Express, a blog devoted to science fiction romance. The fab ladies here extended an invitation my way to post for Smugglivus, so I jumped at the chance to be a part of this commemorative celebration.

Congratulations, Ana and Thea, for a most excellent accomplishment!

Now for our feature presentation:

Science fiction romance goes waaaay back, far before The Galaxy Express began its journey across the sea of stars. The subgenre is nothing new, and the advocates behind it have been chugging along through feast or famine, but science fiction romance still has that undiscovered country feel about it.

I wanted to help advance it.

You can read the full story behind that in an interview I did here. Essentially, the time seemed right. Authors Linnea Sinclair, Susan Grant, Rowena Cherry, and Jacqueline Lichtenberg are the advance guard of science fiction romance. Loyal readers such as >Kimber An, Lisa Paitz Spindler, Laurie Green, Ella Drake, and other Skiffy Rommers have been flying the science fiction romance banner for years. I simply threw up a big tent so we could all party together.

And the support of the SF & romance bloggers has been phenomenal. Because of the outpouring of positive responses, I knew I was onto something. I’m honored that so many sites—Enduring Romance, Lisa Paitz Spindler, and Dear Author, to name just a few—all added The Galaxy Express to their blogrolls right out of the gate.

Then there’s John “Link King” DeNardo of SFSignal who linked to various Galaxy Express posts—and he’ll be the first one to tell you he’s a better man for it ;). And when a debut blogger gets visitors from premier sites such as The Book Smugglers and Ramblings on Romance, well that leaves me all atwitter.

As the year 2008 unfolded, I also had the pleasure of participating in discussions at Grasping for the Wind. As if that weren’t yummy enough, I was invited to become a blogger at Tor.com, where I crash the party with all kinds of science fiction romance goodness.

Science fiction romance continues to evolve and is experiencing growing pains, but that makes the anticipation of where it could go that much more exciting.

It’s evolving for the better, as indicated by the increased focus on external plots and swell science like nanotechnology. Authors have been creating flawed heroes and heroines who challenge many a romance stereotype. And what’s not to love about girls with guns—and pimped up trucks? Or admirals with attitude (Philip Guthrie, meet Brit Bandar)?

Rather than the “favorite books” angle, I’d like to present examples of what made the past year a particularly strong one for science fiction romance. The following sampling of books I read epitomizes the subgenre for me and indicates a promise of what’s in store for the future:

(Honorable mention goes to a 1997 futuristic romance I read in January, KNIGHT OF A TRILLION STARS by Dara Joy. I have a feeling they won’t make ‘em quite like that again!).

As for science fiction romances on my TBR pile, the first includes Linnea Sinclair’s HOPE’S FOLLY (February 2009). Lots o’ buzz around this book. I’m also looking forward to Susan Grant’s WARLORD’S DAUGHTER (February 2009), especially since she’s taking her stories and characters in a different direction—one that promises much coolness. Then there’s BEYOND THE RAIN, an intriguing story by debut author Jess Granger (August 2009).

Other books include series titles such as WANDERLUST (Ann Aguirre), THE COLD MINDS (Kristin Landon), and THE STARS DOWN UNDER (Sandra McDonald). There are other Shomi titles I’d like to explore, as well as more old school futuristic romances (in particular, I’ve got my eye on Catherine Spangler’s SHADOW CROSSING. I mean, check out the hero’s sexy uniform!).

Since Sharon Lee & Steve Miller have re-released some of their “Regency in space” books, I’m ordering those as well. And finally, I’m also looking forward to sampling more ebooks, particularly by authors such as Nathalie Gray, Ann Somerville, and Sara Reinke.

Science fiction romance: 2009 and Beyond

Science fiction romance is a subgenre in flux, and will continue to be for the next year or two. Probably more. I discussed that issue at length in a recent guest post at Dear Author.

About a month after launching The Galaxy Express, I posted my State of the Science Fiction and Romance Union in which I made a few predictions. Not enough time has passed to evaluate them all, but a few have shown some colors: The economy did indeed weaken further, and some authors have taken a detour into other genres, or are seriously considering it.

Yet the cup of hope overfloweth as it seems that 20090-2010 might be the years in which aspiring science fiction romance authors storm the NY castle with their manuscripts in hand—and those are just the ones I know about.

Since a good bit of time has passed since The Galaxy Express’ launch, accompanied by a fresh prospective, I have a few predictions for 2009:

Debut authors or the works of established authors in traditional print formats will appear sporadically. A few published authors may have surprise science fiction romance manuscripts/proposals up their sleeves as well. I know of one for certain. Because of the current economic challenges, epublishers most likely will step up to fulfill the demand while NY is downsizing.

We’ll continue to see smarter, edgier, and spicier stories. The sex scenes will increase before they’ll plateau or take a breather. But the speculative component will strut its stuff in an increasingly sophisticated fashion. And in light of this post, it seems a few good villains might be in the pipeline as well.

Whatever happens, I invite one and all to join me aboard The Galaxy Express for continuing coverage on the science fiction romance front. I’m honored to share this journey with such devoted colleagues. Thanks for your support, and for your art!

Thanks again Heather for yet another insightful article!

Next on Smugglivus: The Discriminating Fangirl