Who: Joel Sutherland, author of speculative fiction and the first ever author to contact us when we started the blog. So, who better than Joel to kick off Smugglivus? 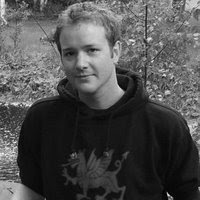 We hereby give the floor to Joel and officially kick start the Countdown to Smugglivus!
____________

In short, it’s the happiest time of the year.

And yet, I know almost nothing about it.

Well, that’s not completely true. Just over a week ago I read the same post, right here at The Book Smugglers, that you did. Smugglivus is Coming: The Details! And boy, were there ever a lot of details. Guest bloggers. Reviews. Best of lists. Worst of lists (my favourite). Giveaways. More madness than you can shake an Arkham straight jacket at.

But still, what do we really know about Smugglivus? The one thing I’ve learned, during the past year reading The Book Smugglers, is you never know what Thea and Ana have in store. Their reviews are painstakingly thorough, honest and emotional. Their interviews are engaging, snappy and affecting. They sprinkle in enough geektastic news to make Harry Knowles jealous. Nothing they do is rushed or slapped together. Their website is the Shangri-La for book lovers. It should be obvious by now that I am a proud, card-carrying Bosmad—a Book Smuggler Addict. I doubt I’m alone.

I owe it all to chance. About a year ago, I was trolling the web for decent book review sites that might be interested in a collection of stories about gastrointestinal horror. Unsurprisingly, I didn’t find many. I had co-edited an anthology with my wife, Colleen Morris, titled Fried! Fast Food, Slow Deaths (the title pretty much tells you all you need to know about the type of book it is), for small press Graveside Tales. I typed “horror book reviews” into a Google Blog search and began scrolling…and scrolling…and yawning…and scrolling. There wasn’t much, and many of the hits weren’t actually horror book review blogs at all. However, somewhere around the tenth page I clicked on a link and ended up at this site. It was too good to be true. I wrote an email asking if they’d be interested in an electronic copy (remember, it was published by a small press—promotional budgets are as starved as the cast of the new 90210) of the book for review, and within minutes I had heard back, and the answer was an enthusiastic yes.

Less than a year later, by the way, The Book Smugglers pops up at number fourteen in that same Google Blog search. Not bad for a couple of self-described “completely obsessed, sad, sick addicts when it comes to books.” You think they’d be too busy, oh, I don’t know, reading, to post the amount of quality write-ups they do on an ongoing basis. I’m almost positive they have a team of blogging elves that post for them while they sleep.

The review of Fried! was posted on February 3, 2008. It pointed out the highlights and the lowlights (the latter blessedly fewer than the former), and for that I’ll be eternally thankful. A review isn’t worth the paper it’s printed on (or, in this case, the electricity it’s powered by) if it’s not honest and unbiased. Besides, readers are smart, and they’ll know when a reviewer is lying to them. When I read a good review on this website, I know the book is worth checking out. I doubt that The Book Smugglers would have lasted the year, gaining the readership that it has, if the two obsessed, sad, sick addicts who run the place had not written every single word with their hearts and their brains.

I’m honoured to have been asked to kick start the Smugglivus Countdown on the day that happens to be my birthday. I can’t think of a better gift. Maybe Rock Band 2, but this is a close second. I didn’t set out to write what ended up sounding like a lifetime achievement introduction speech (if the whole librarian/author thing doesn’t work out, I think I might have a career in politics, the Oscars, or guest blogging), but what can I say? When I love something, I want the whole world to know about it, and I want the whole world to love it with me.

In fact, I was actually asked to write a bit about my favourite books of 2008 (not necessarily published this year), and a bit about what I’ve got coming up in 2009. I fear that if I ramble on too much longer, I’m going to jeopardize my chances at landing that sweet guest blogging career I’ve got my eyes on, so I humbly offer you Joel Sutherland’s Book Reviews in Five Words or Less:

I don’t think Thea and Ana need to fear competition from me anytime soon.

As for myself, my first novel, Frozen Blood (Lachesis Publishing), is coming out on December 28, 2008. Here’s a Blurb in Five Words or Less (I’m on a roll): Hailstorm horror, perfect winter reading! I also have stories in four anthologies coming out in the coming months, and a children’s non-fiction proposal to work on. 2009 will also be the year I write a dissertation to complete my Masters in Library and Information Science. My wife would’ve killed me if I didn’t mention that—I often want to put off my studies for my creative writing, and she’s always been there to get me back on track. Do dissertations have dedication pages? They should. If not, a lot of spouses are going uncredited, and there’s nothing sadder than an uncredited spouse.

If you’re interested in more information about me or Frozen Blood, or if you’re dying to point out all the ways I cheated in the Book Reviews in Five Words or Less section to fit in more than five words, please visit http://www.joelasutherland.com.

From this Bosmad to you, Merry Smugglivus to all, and to all a dark and stormy night!

Joel A. Sutherland
9 Comments
By Ana