Book Review: The Girl Most Likely To… By Susan Donovan

Title: The Girl Most Likely To…. 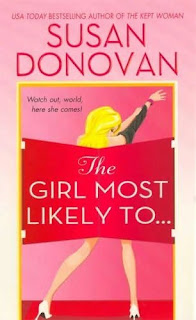 Summary:Kat Cavanaugh was sixteen when she hitchhiked out of Persuasion, West Virginia, and vowed never to return. Who could blame her? In the course of one afternoon she’d found out she was pregnant, discovered her father’s adulterous affair, got dumped by the baby’s daddy, kicked out of school by the principal, and thrown out of her home by her mother. Twenty years have gone by, and Kat’s back — gorgeous, stinking rich, and ready to rub her fabulousness in the faces of everyone who hurt her. At the top of the list is Riley Bohland, the boy who stole her heart and then broke it before she could tell him about the baby. She may desire sweet revenge, but Kat, Riley, and the rest of the town are about to get a big helping of the truth instead, and it isn’t easy to swallow.

Why did I read the book: I received an ARC from St Martin’s Press.

20 years ago, one single day – Greek tragedy style – changed Kat Cavanaugh’s life forever. First she finds out she is pregnant, then she is kicked off school, then she sees her father banging his mistress at his art studio, the her mother tells her to go away and to top it all, her sweetheart, her boyfriend, the love of her life and father of her baby, Riley Bohland, breaks up with her before she can even tell him about the pregnancy.

Desperate and pissed off, she runs away. She hitchhikes by the side of the road and in a most needed streak of lucky, she ends up hitchhiking with a good man (not a rapist or serial killer, phew) named Cliff who takes her to his sister’s house, where she spends the next 7 years until she is doing well enough working as a florist to be able to make a living for herself and her son.

When Phyllis dies leaving her a few million dollars (!!!!) , she decides to have a do-over and with money and looks she finally muster the courage to go back to Persuasion to show those people who thought she was “The Most Likely Girl to end up in a ditch somewhere” that she has made it good. Her plan is to walk back into their lives with a BANG and collect the long overdue apologies. Her first stop? Her ex-boyfriend’s so that she can finally tell him that he has a son.

Mind you, the book opens right here with her walking into Riley’s life and to her surprise things don’t work out the way she predicted – Riley already knew he had a son and he had been looking for them and as soon as he sees her walking back into his life he lets all the anger and frustration out: how dared she keep his son from him?

This is when I realise the book I am reading is not the book I thought I was going to read. By the blurb and by the cover, I thought I was going to read a funny, light romance about a wronged girl going back to get due payment .The Girl Most Likely To was, in fact, a tearjerker of a novel about second chances and I liked it better for that – as it turned out, Kat was not a compete victim and she may have overreacted to most of the happenings on that fateful date. And that reaction, as over the top as it was, in turn shaped the next twenty years of her life. You see, memory can be a bitch and Kat ended up constructing reality according to how she perceived the truth to be and when it became clear that things were not exactly as she thought they were, she realises she has some forgiveness to ask as well. And bridges to mend.

I was specially touched about the renewing of Riley and Kat’s relationship and I had tears in my eyes more times that I can count. The book is sprinkled with snippets of their story down memory lane – from becoming friends when they were barely out of their diapers to the burgeoning of their love when they were teens. By the middle of the book, I had no doubts whatsoever that Riley and Kat were truly meant to be together and the fact that they dealt with their problems in an adult manner that contrasted so clearly with their 16 year old selves was really well done.

Persuasion and some of its inhabitants – at least the people that are directly connected with Kat are also characters in the book . In many ways this is an ensemble story with for example, the staple secondary love story between Riley’s brother and Kat’s best friend which add the necessary light/funny moments to a story overwhelmed with powerful emotional encounters. There is also Riley’s scorned, crazed ex-fiancée for example or Kat’s scumbag father. In some ways, I was surprised when the author took an expected turn and went places I wasn’t expecting like with the ex-fiancée who instead of becoming a drag actually became real when she realised all by herself she had serious psychological problems.

But in many ways, the secondary storylines detracted from the main couple and this is my main grippe with the novel – instead of concentrating in the beautiful love story between Riley and Kat and their immediate family and acquaintances, the plot keep expanding exponentially outwards and when a second secondary female character become increasingly crazed and stalky or when the father becomes not only abusive, violent, misogynist but also a dying crazy paedophile who goes into a killing spree at the end of the book – I said NO MORE. THEN it ends with a contrived, arbitrary, deus ex machina twist that simply negates 20 years of Kat’s life.

In other words: the book suffers from Too-Muchness, an affliction I find more and more romance novels to be suffering from – had this been a book about Kat and Riley and the immediate family and how to forgive and forget it would have been much better to me , as a reader. Alas, this is not the story the author meant to tell.

The story she does tell starts with a lot of heart and soul and somehow it loses itself with its squandering storylines that sets it firmly in that misty place also known as The Land of Wasted Opportunity.

This is right at the begging, when Kat shows Riley the picture of their son. I thought it was such a powerful, tender moment, with this man, crying over what he lost:

“Oh, God.” Riley whispered. “That’s really my boy”.
(…)
Riley’s head dropped. He couldn’t carry the weight of the grief anymore, and he cried. Kat’s hand reached across the space between them and she stroke his knee.
“I am so sorry, Riley”.
He looked up, not caring that she saw him this way. “You could have found a way to tell me.”. He let the tears fall down his face. “You underestimated the hell out of me, and you cheated me out of my own life, our life! Who’s going to give me back the twenty years I could have had with you!”

Additional Thoughts: Sometimes I wonder if I am too picky – but I do seem to prefer simple, to- the- point storylines especially when it comes to non-paranormal (for paranormal and Fantasy, the more complex the better!) contemporary and historical novels. The more characters and secondary storylines appear the more I cringe as very rarely it all WORKS in a cohesive manner. There are, of course exceptions, but I can’t seem to remember one right now – can you help me out here?

Verdict: a very emotional, beautiful central storyline with a plethora of not as gripping secondary ones. Overall, it falls short.

Rating: 5 (not really bad but not really good either)