Book Review: The Hero’s Guide to Storming the Castle by Chirstopher Healy 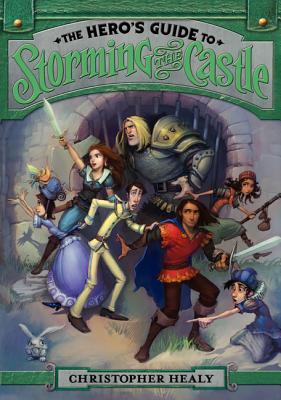 Title: The Hero’s Guide to Storming the Castle

Prince Liam. Prince Frederic. Prince Duncan. Prince Gustav. You remember them, don’t you? They’re the Princes Charming who finally got some credit after they stepped out of the shadows of their princesses – Cinderella, Rapunzel, Snow White, and Briar Rose – to defeat an evil witch bent on destroying all their kingdoms.

But alas, such fame and recognition only last so long. And when the princes discover that an object of great power might fall into any number of wrong hands, they are going to have to once again band together to stop it from happening – even if no one will ever know it was they who did it.

Christopher Healy, author of the acclaimed The Hero’s Guide to Saving Your Kingdom, takes us back to the hilariously fractured fairy-tale world he created for another tale of medieval mischief. Magical gemstones, bladejaw eels, a mysterious Gray Phantom, and two maniacal warlords bent on world domination – it’s all in a day’s work for the League of Princes.

Stand alone or series: Book 2 in the Hero’s Guide series

Why did I read this book: I thoroughly enjoyed The Hero’s Guide to Saving Your Kingdom, so was thrilled when I learned a sequel was forthcoming. This is a delightful, funny, charming series and I eagerly devoured this second book.

A NOTE: Though this is the second book in the series, you can easily read this book without having read The Hero’s Guide to Saving Your Kingdom. (In other words, no spoilers ahead!)

Ever since the League of Heroes saved their respective kingdoms from clutches of a truly evil witch, you’d think they would have earned a little bit of respect. But, unfortunately, not much has changed for Prince Charmings Frederic, Liam, Gustav, Duncan, and Princess Cinderella. (Ok, that last bit is a lie – Cinderella is as awesome and beloved as she has always been.) Prince Frederic is still afraid of adventure – and now has a serious complex about not measuring up to the truly heroic Prince Liam, who seems to have so much more in common with his courageous fiancee, Ella. Liam is still afraid to return home and face his own betrothed, Briar Rose. Prince Gustav is still the laughingstock of his family (ever since he had to be saved by Rapunzel and later, Ella); Prince Duncan is just as scattered and strange as usual (though he and his wife, Snow White, are happy together). But when all seems lost, adventure calls! Prince Liam is kidnapped by his fiancee and forced to marry the frilly, conniving Briar Rose – for the spoiled Princess has a dastardly plan to take over ALL the kingdoms with a magical heirloom in her new husband’s family vault. And while Briar Rose is up to her elaborate coif in evil machinations, other, more sinister forces are at play – the Bandit King Deeb Rauber (eleven years old, but fiercer than anyone else in the land) and the vicious Lord Rundark of the fearsome land of Dar play to take over the Thirteen Kingdoms.

Only the League of Heroes (and a few old friends) can stop these power-hungry villains – but they’ll have to reunite and work together to save the day. Again.

The followup to 2012’s delightfully zany The Hero’s Guide to Saving Your Kingdom, The Hero’s Guide to Storming the Castle is every bit as charming and winsome as its predecessor. Like that first book, Storming the Castle blends humor, familiar fairy tales and an unexpected cast of heroes and villains (and some folks that sit somewhere between both extremes) to make for a truly hilarious and action-filled romp. This is the kind of book you want to read aloud in a classroom full of eager kids, because it is sure to get laughs (I’m not talking giggles or titters, but full-bodied, belly shaking guffaws and laughs). It’s also full of absurd battles, vegetarian trolls, marauding giantresses, bejeweled swords, Hermes-style messengers (complete with seven-league boots and unique fashion choices), and… well, plenty more. Suffice it to say, the scope of Christopher Healy’s imagination in this series is pretty fantastic.

Of course, the biggest draw to the series lies with the main characters, the League of Heroes (and Heroines). While Duncan is charmingly spacey and Gustav unerringly hot-tempered, the real main characters of this book are Frederic (with his fashion sense and aversion to action, but his desire to prove himself to his amazing fiancée, Ella), and Liam (who goes through a bit of an identity crisis – and is called out on his ridiculousness). Ultimately, being the lover of heroines that I am, my favorite characters are the ladies – Princess Ella of the fierce, fast sword and big heart, and Princess Lila the bold (Liam’s little sister, who is on the way to becoming one of the kingdom’s best bounty hunters with a little guidance).

And then there’s Sleeping Beauty. What initially bothered me about this book ended up being the thing that pleasantly surprised me by the novel’s end – that is, the “evil” character of Briar Rose. Briar, you may remember from the first book (if you’ve read it), is a bit of a prickly character – ok, that’s putting it nicely. She’s a spoiled brat, bent on controlling everyone and everything just because. While I hated this characterization in the first book (because, come on, why go with the spoiled brat princess stereotype in a book where boys are meant to save the day?), I love that she’s given a deeper, different characterization in this book. I won’t spoil it, but I’m glad it happens…eventually.

My only criticism for this book is that it feels a tad overlong. While there’s a lot of action and movement in this book, ultimately it boils down to a single siege of the eponymous castle – at nearly 500 pages, the book is a fast read, but could have used some significant trimming down. Still, The Hero’s Guide to Storming the Castle is a delightful read that should resonate with its target audience. Definitely recommended, especially for younger readers.

Additional Thoughts: We are giving away a copy of The Hero’s Guide to Storming the Castle PLUS a signed framed print illustration from the book! Go HERE to read an excerpt, see the art, and enter the contest.

Reading Next: 2312 by Kim Stanley Robinson