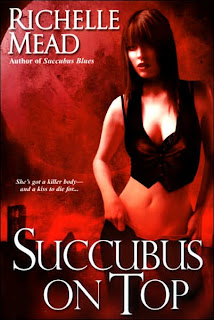 Stand alone or series: Book 2 of the Succubus series

Why did I read this book: Loved Succubus Blues (book 1) and could not wait to get more Georgina.

Love hurts, and no one knows it better than Georgina Kincaid. If she so much as kisses her new boyfriend, she’ll drain his life force. Georgina is a succubus—a demon who draws her power from other men’s pleasure. Admittedly, the shapeshifting and immortality perks are terrific, and yes, Georgina did choose to join the ranks of hell centuries ago. But it seems completely unfair that a she-demon whose purpose is seduction can’t get hot and heavy with the one mortal who knows and accepts her for who she is.

It’s not just her personal life that’s in chaos. Doug, Georgina’s co-worker at a local bookstore, has been exhibiting bizarre behavior, and Georgina suspects that something far more demonic than double espressos is at work. She could use help finding out, but Bastien, an irresistibly charming incubus and her best immortal friend, is preoccupied in the suburbs with corrupting an ultra-conservative talk radio star—and giving Georgina some highly distracting come-hither vibes. Georgina is going to have to work solo on this one—and fast because soon, Doug’s life won’t be the only one on the line…

I really enjoyed the first book in this series, Succubus Blues, and so it was with voracity and verve I plunged headlong into Succubus On Top (love the title, by the way)! And, once again, I found myself inexplicably drawn to this sexy, irresistible succubus and her tantalizing world. What I appreciate the most about the Succubus books is the interesting moral dilemma each presents–there is no simple “GOOD” or “EVIL” label, but the shades of gray in between. More on that in a bit.

Georgina Kincaid, aka Thetis, aka Fleur, aka Letha, finds herself recipient of a prize: ‘Award of Achievement for Excellently Exceeding and Surpassing Requisite Succubus Quotas in this Most Recent Quarter’. Complete with a certificate and expired video coupons. Things are looking up for Seattle’s best succubus–her demonic boss, Jerome, is pleased with her job performance, and her love life…well, she has a love life, as she and author Seth Mortensen pursue a serious relationship. Of course, things are complicated with Seth. As in, they can’t do much more than the sixth grade hand-holding, chaste-kissing thing without Georgina sucking years off his lifespan. As Georgina and Seth try to work through their unique relationship, other aspects of life in Seattle start getting a little wonky. First, Bastien, an old friend who used to work with Georgina shows up in town (and by work, I mean work since Bastien is an incubus–that is, a male version of Georgina). Bastien is eager to pull of a huge job for Below by seducing–and recording then broadcasting–Dana Dailey, a hard nosed conservative radio host and personality. Appealing to Georgina’s morals, Bastien enlists his old friend’s help in entrapping Dana. To complicate things further, Georgina’s day job coworker Doug has seemed to hit a hot streak with his local band–but at the same time starts exhibiting strange, dramatic mood swings. She suspects drugs, but when the same behavior starts to spread to another coworker and Doug’s life is in jeopardy, Georgina decides to take matters into her own hands.

Succubus On Top continues building the universe established in the first book, broadening the creatures that populate it. In addition to delving deeper into the characters from Succubus Blues, especially with the problems surrounding coworker Doug, new characters and bonds are forged. The wonderful addition of Bastien caused some veeeerrry interesting friction in this book, and the subplot involving bringing down the homophobic conservative witch was compelling (and so very apropos considering the current political season…but there I go, no politics at the dinner table).

As I mentioned earlier, something I love about these books is the inherent contradictions to the homogenized versions of Angels and Demons that Ms. Mead presents. Georgina, as a succubus, is by definition a denizen of Evil. And yet, Georgina refuses to sleep with her boyfriend. She gets upset when people she works with think of her as a whip-wielding dominatrix. She and Bastien work hard to bring down a high-profile conservative zealot–which seems counterproductive for The Dark Side, since bringing down a monger of intolerance seems like it ultimately is a good thing. As Georgina discusses in her seduction narrative of “good souls”, however, morality is all relative. And Hell, like any other place of work, is a bureaucracy. By bringing down Dana, it’s not so much about the ultimate “good” or “bad” that matters, but rather that it is a very public and very demeaning seduction of a prominent figure, who also seems to adhere to a strict Christian interpretation of the bible with her anti-homosexual rhetoric. It is because this sensational seduction has ultimate “good” at its end that Georgina agrees to participate in the first place–just as with her earlier hits of immoral souls, Georgina finds loopholes that suit her interesting sense of morality and logic (and, I might add, it is this sense of morality that makes Georgina so appealing as a heroine).

In Succubus Blues, I was struck by the friendship between Carter (an Angel) and Jerome (a Demon). They are almost inseparable, and neither gets in the other’s way, even accepting advice from each other. I love that the relationship here is more of a Good Omens sort of sensibility–and I get the impression that both “sides” have been around so long, the day to day affairs of running their bureaucracies doesn’t matter so much as getting the job done and in interesting ways does. So long as Georgina meets her succubus quota, Jerome doesn’t give a crap how she gets it done (unless she pisses him off). Like any other job, working for Hell seems to be…well, a job. I love this unglamorous sort of view of things. In this book, Georgina and Carter build more of a rapport and have an understanding–I like seeing this growing relationship between the noble damned and grungy angel, and I’m interested to see where this goes in future books!

If I had to cite one problem with Succubus on Top, it would be the level of predictability to the story. Both the villain behind Doug’s success and the Dana seduction plotlines had all the subtlety of a shrieking, oncoming frieght train. Although there was some cool background and world building expansion with the mystery of Doug’s mood swings, the clues as to who is responsible and why Doug’s band is so successful are so obviously written for the audience’s benefit, it’s infuriating to see Georgina stumble around for the answers!

My only other problem is with the doomed Georgina-Seth relationship. Well, I suppose it’s not so much a problem as I find the dynamics of this relationship are so well-written and complicated…but Succubus On Top made it very clear to me that there is an expiration date on this romance. While there are some genuinely heartfelt moments between the two and watching them struggle with true love and their limitations is endearing, it is very painfully clear that this relationship is destined for rockiness, unless there is some kind of divine (or demonic) intervention. The appearance of Bastien only solidifies this…and it is a question that will be dealt with in Succubus Dreams.

Notable Quotes/Parts: Although these books stick with a biblical and western civilization based mythos (along with almost all urban fantasy and paranormal romance on the market today), we discover that there is more out there than just the Judeo-Christian version of Heaven and Hell, with the inclusion of Gods and creatures from other theological backgrounds. Very cool. Here’s the section where Georgina reveals the existence of other beings to Seth:

“That man that was talking to Alec,” I said, still in shock. “He’s an immortal.”

“What do you mean not one of yours?”

“Not all immortals are part of the heaven and hell system. There are a lot of other creatures walking the world: nymphs, orisha, oni…”

“You do realize you’ve just thrust me into a theological quandary likely to keep me awake at night for years,” he joked.

Now if we get to see any oni or orisha–or anything else from different pantheons–now THAT would be awesome.

Additional Thoughts: In reading some other reviews, it seems there’s some sensitivity concerning genre classification for Ms. Mead’s Succubus books. At Barnes and Noble, where I bought Succubus Blues, I found the books in the general fiction section. However, at Borders, where I purchased Succubus On Top, the books were shelved in the Romance section. According to publisher Kensington Books’ website, these books are labeled Fantasy. In my opinion as a reader and reviewer, these books are Urban Fantasy. There is a romantic plot to the books, but in no way does this follow the traditional romance novel conventions. There is no true-mate pair ending with a Happy Ever After–although there is love, and romance, and happiness of sorts. But, again, keep in mind that Georgina is a succubus and to survive she gets her energy from sleeping with random dudes. This may squick out some paranormal romance readers.

So please, pay heed–this is more urban fantasy along the lines of Kim Harrison’s The Hollows than it is Kresley Cole.

And…to be perfectly honest, the edgier urban fantasy vibe with its complicated romantic plot is precisely why I love this series!

Verdict: Another enjoyable, well-written book. It wasn’t quite as good as Succubus Blues, but still a solid, great read nonetheless. The strains on Georgina and Seth’s relationship are starting to take their toll, and I am anxious to see what happens in the next chapter of Georgina’s story…