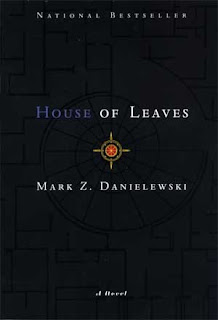 Summary: (from amazon.com)
Years ago, when House of Leaves was first being passed around, it was nothing more than a badly bundled heap of paper, parts of which would occasionally surface on the Internet. No one could have anticipated the small but devoted following this terrifying story would soon command. Starting with an odd assortment of marginalized youth — musicians, tattoo artists, programmers, strippers, environmentalists, and adrenaline junkies — the book eventually made its way into the hands of older generations, who not only found themselves in those strangely arranged pages but also discovered a way back into the lives of their estranged children.

Now, for the first time, this astonishing novel is made available in book form, complete with the original colored words, vertical footnotes, and newly added second and third appendices.

The story remains unchanged, focusing on a young family that moves into a small home on Ash Tree Lane where they discover something is terribly wrong: their house is bigger on the inside than it is on the outside.

Of course, neither Pulitzer Prize-winning photojournalist Will Navidson nor his companion Karen Green was prepared to face the consequences of that impossibility, until the day their two little children wandered off and their voices eerily began to return another story — of creature darkness, of an ever-growing abyss behind a closet door, and of that unholy growl which soon enough would tear through their walls and consume all their dreams.

Why did I read this book: I was intrigued by the blurb and the faux-reality Blair Witch sort of appeal to the opening pages. Then, when I heard from trusted sources that this was the scariest book they had ever read, I had to have it…

Ohmyfreakinggoodness. House of Leaves is probably one of the scariest, most jarring books I have ever read.

This is a surreal, post-modern novel. It is strange and powerful read that holds the reader hostage–literally–until that last page is turned. And, to be honest, even longer after that.

Johnny Truant is the narrator-compiler of this story, a messed up tattoo parlor employee, looking for a new apartment. Johnny’s buddy Lude tips him off that there’s a vacancy in his building, as an old, blind man named Zampanò in his building recently passed away. They check out Zampanò’s apartment, and discover a thick manuscript. Johnny decides to read it and discovers that it is a dissection of a strange documentary shot by award-winning photojournalist Will Navidson, called “The Navidson Record”. Truant, writing to readers, shifts his narrative to Zampanò’s manuscript, and we learn about Will Navidson and his strange, terrifying home. Interjecting the main body of the book, there are Zampanò’s notes, Truant’s footnotes (sometimes lengthy stories about his own life and the strange things that have been happening to him), and corrections/footnotes from Editors. Also, in one of the appendix exhibits to the book, there is a rather lengthy collection of letters from Johnny Truant’s mother from her stint in a mental institution, called The Whalestoe Letters.

The Navidson Record–where the true meat of the book lies–details the strange occurrences in the new Navidson family home in Virginia. One day after moving in, the family discovers that where a smooth wall used to be, there now is a door, leading to a small closet and exiting into their children’s room. Navidson, at a complete loss and with his photographer’s sharp eye decides to conduct measurements of the home–especially after his wife Karen puts up wall shelves bracketed tightly by both walls of the room, and the next day the shelf collapses as the walls seem to be further apart. Will soon discovers that his house’s interior measurements continue to grow, while the exterior measurements remain exactly the same. Finally, a door appears in the Navidson’s living room, extending into a long, dark hallway–which should reach out across the Navidson’s front lawn, but does not. The hallway grows, it curves and leads eventually to a long, spiralling staircase going down, down into the bowels of the house. Fascinated and terrified–but unable to pull away from this mystery–Will and his brother Tom decide to catalog, film and photograph an exploration the staircase, to see where exactly it goes, and what might lie at the bottom. Will hires professional excavators to make the trip with he and his brother. What they find, the excavation itself is the true Navidson record, interjected with Zampanò’s research and Truant’s parallel storyline, told in the footnotes.

The book is written in a completely unconventional style–in part satirizing acedemic literature with the extensive footnotes and lengthy appendices, and in other part a truly terrifying exploration of “ergodic fiction“. At one point, when Will and his brother are running through the labyrinthine dark corridors of the house and something is chasing them, the text is in staccato,

per large, blank page. The result is terrifying–as they run from the monster, I found myself breathing quickly, frantically turning pages, “running” in my reading just as the characters were running. Or, for example, with the Whalestoe Letters–Johnny’s mother’s letters begin as sweet, apologetic, and heartfelt. But, with each letter, her tone grows increasingly paranoid and delusional–by the one of the last letters, she has informed Johnny that she will be writing in a code: take the first letter of each word to unearth the true message. Sitting at my desk, pen and scratch paper in hand, I gradually deciphered the mother’s coded message–and immediately ripped the scratch paper to shreds, lest someone find it and think I had some serious, serious problems. Then, there are the sections where text is crossed out, written backwards, footnotes seem to take over the entire page and formatting of the book–and as characters lose hope and their minds in the maze of the house, so too did I, reading the book. Just as the Navidson’s house is alive, House of Leaves is conscious and sprawling, worming its way into your brain.

Just as the text and content of the book is unconventional, the actual printface is a publisher’s nightmare. Every time the word “house” is written, it is in blue. Editor strikeout notes and minotaur are in red. The text crawls across the page, upside down, backwards, in limited spaces, shapes and in multiple fonts and typefaces. On certain pages, a small checkmark will appear in the corner. References and quotes are made in multiple languages. Mistakes are made (purposely) in spelling and grammar. While this can be confusing, it is undeniable effective and jarring. One is never allowed to firmly get their barrings in House of Leaves.

This is by no means an easy book to read, and many people might put it down in exhaustion or disgust. BUT, in my opinion, it is an infinitely rewarding tale of horror, in a creeping, seeping dread way. I recommend this book to everyone I know–literature snobs, Stephen King-a-holics, academics, pop fiction junkies…just make sure you know what you are getting into with House of Leaves. And keep a lighthearted book nearby.

Notable Quotes/Parts: The Whalestoe Letters, originally not included wth the book proper, have been added to the appendices of the recent editions (note: there are a bunch of editions out there, I recommend going with the full-color version and I believe this is what most booksellers carry). These letters, if I may be perfectly frank, scared the shit outta me. Deciphering that mother’s message letter by letter and then reading the resulting note was terrifying.

Additional Thoughts: The Navidson’s house is said to be inspired in part by haunted houses such as The Winchester Mystery House, in San Jose, CA. Sarah Wnchester felt that her house was haunted with the ghosts of people killed by her husband, William Art Winchester’s guns. Convinced by a medium who told her that there was a curse on her family (following the death of her husband and daughter), Sarah turned to building her house tirelelssly until her death. The house has 160 rooms and a number of eccentricities (stairways leading to ceilings, doors that open into walls, Sarah’s fascination with the number 13 and spiderweb designs). 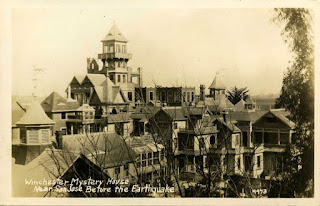 I immediately think of (and highly recommend) The Haunting of Hell House and Stephen King’s Rose Red too, when pondering Danielewski’s House of Leaves.

Verdict: This is one creepy, disturbing novel, and I *highly* recommend it!

Rating: 9 Damn Near Perfection – really, it is perfect in its own, bizarre, disturbing way.