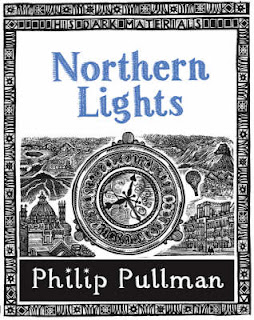 Stand Alone or Series: First novel in the His Dark Materials trilogy

Why did we DARE Katie to read this book: Because both of us love this book and this series. This is classic literature that should be read by all.

Summary: (from amazon.com)
In a landmark epic of fantasy and storytelling, Philip Pullman invites readers into a world as convincing and thoroughly realized as Narnia, Earthsea, or Redwall. Here lives an orphaned ward named Lyra Belacqua, whose carefree life among the scholars at Oxford’s Jordan College is shattered by the arrival of two powerful visitors. First, her fearsome uncle, Lord Asriel, appears with evidence of mystery and danger in the far North, including photographs of a mysterious celestial phenomenon called Dust and the dim outline of a city suspended in the Aurora Borealis that he suspects is part of an alternate universe. He leaves Lyra in the care of Mrs. Coulter, an enigmatic scholar and explorer who offers to give Lyra the attention her uncle has long refused her. In this multilayered narrative, however, nothing is as it seems. Lyra sets out for the top of the world in search of her kidnapped playmate, Roger, bearing a rare truth-telling instrument, the compass of the title. All around her children are disappearing—victims of so-called “Gobblers”—and being used as subjects in terrible experiments that separate humans from their daemons, creatures that reflect each person’s inner being. And somehow, both Lord Asriel and Mrs. Coulter are involved.

And so, without further ado, we turn the floor over to the wonderful Katiebabs, from Babbling About Books, and More! & Ramblings on Romance.

Philip Pullman’s Northern Lights is also known as The Golden Compass, which was made into a movie last year. Published in 1995, this is the first novel in Pullman’s His Dark Materials trilogy about the journey of a young orphan girl, Lyra Belacqua, and the world she inhabits. This world Pullman has creative is a fantasy and mystical adventure where people have shift changing animals called daemons by their sides. These daemons are a part of the person’s soul and their personality. 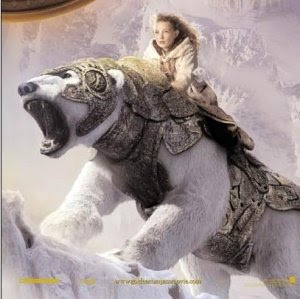 “The worst breach of etiquette imaginable” is for a human to touch another person’s dæmon; even in battle, it is said, most soldiers would never touch an enemy’s dæmon, though exceptions can be made (such as between lovers). The physical handling of a dæmon causes vulnerability and weakness in the person whose dæmon is being touched. However, dæmons can touch other dæmons freely; interactions between dæmons usually accentuate and illuminate the relationships between the characters.”

Lyra’s daemon is named Pantalaimon and they reside at Jordan College, in Oxford, England, which is parallel universe during pre World War II. Lyra has free reign of the college since her Uncle Asriel is quite powerful and a major benefactor to the college. He keeps her there for her own safe keeping as he travels around the world as an explorer. One day Asriel comes for a visit and Lyra stumbles upon a plot to assassinate him. The Master of the college wants to do away with Asriel because of his on-going search for a mysterious particle called Dust that is found near the Aurora Borealis. 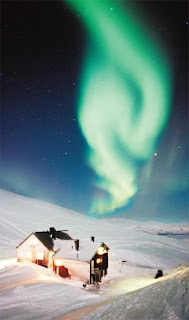 Asriel leaves on his merry way, and Lyra continues as she has always done, playing with childish abandon and causing a ruckus. Lyra sometimes is a bit too curious for her own good. But things begin to change as children in the town go missing. Soon there are rumors that the children are being taken away and being eaten by “The Gobblers”. Lyra is safe and sound, but the children she plays with, including her one close friend, Roger have been kidnapped. She decides it is up to her to solve the mystery of The Gobblers and the missing children. Lyra doesn’t get that far in her investigation because a beautiful and mysterious woman, Marisa Coulter comes to the college and takes Lyra away as her assistant. The big question is, who is Mrs. Coulter and why is she so interested in Lyra? That mystery is soon solved because Coulter is behind the kidnapping of the children. And not only is she kidnapping the children for a horrible reason, she may be responsible for imprisoning Lyra’s uncle and has plans for the Dust that could change the world.

Northern Lights is a wonderful, fantasy tale that has so many hidden meanings and subtle undertones, mainly dealing with religion and the bible. When I first began to read, I really couldn’t see why some people would be so up in arms about this book. But as I continue to read, I could definitely see the philosophical, theological and spiritual aspects that Pullman has written, mainly from John Milton’s Paradise Lost. (I found this information from Wikipedia.com) Lyra is the main storyteller and she is a spunky and a tad bit bratty. But what would you expect with no parental guidance? She is also very smart and brave. Her journey is one that is dangerous and scary. The many people and creatures she meets, from talking bears to witches really bring the story alive. Pullman’s world building and storytelling is incredible. I didn’t want to stop reading because each page would bring me to the final epic battle, and in my eyes this was a battle between good and evil. See, there are those religious undertones I am talking about.

“Epic” is the main word that comes to mind when describing Northern Lights. Things build up slowly, where Pullman introduces all the characters nicely to the point where the action starts and doesn’t let up. Some books are much like the movie going experience and I would definitely say that Northern Lights is one of them. This would be a great book to act out, chapter by chapter, especially with children, who of course are the ones that Pullman has written this tale for. 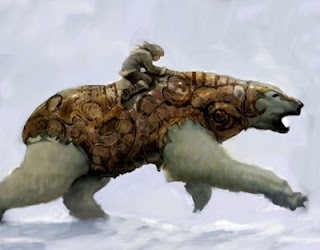 I enjoyed my reading experience so much so, that I would definitely be interested in reading the next two books in this trilogy and perhaps one day if I have my own children, I can sit down and we can read Northern Lights and the rest of His Dark Materials trilogy together.

Now if I could only have my own daemon!

Northern Lights is a definite 9 out of 10 read.

Thank you Katie for the awesome review! And…our next DARE victim, you ask? Karen Mahoney takes on the Romance genre by reading Lord of Scoundrels by Loretta Chase! 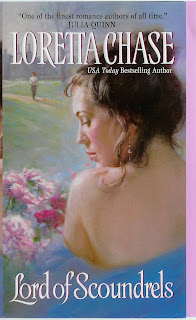 Make sure to stick around tomorrow, when we finally complete our own Dares! Ana takes on Orphans of Chaos, and Thea does The Shadow of the Wind. Hasta mañana!