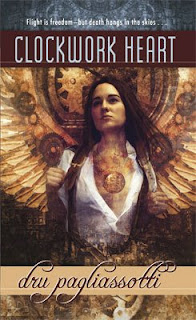 Stand Alone or Series: Stand alone novel; although according to Ms. Pagliassotti’s website there is a forthcoming sequel!

Why did I read this book: Tia at Fantasy Debut had a debut showcase for this novel earlier this year which caught my eye–and Angie’s review sealed the deal.

Summary: (from Amazon.com)
A steampunkish romantic fantasy set in Ondinium, a city that beats to the ticking of a clockwork heart. Taya, a metal-winged courier, can travel freely across the city’s sectors and mingle indiscriminately among its castes. A daring mid-air rescue leads to involvement with two scions of an upperclass family and entanglement in a web of terrorism, loyalty, murder, and secrets.

The steampunk genre is one that has been garnering a larger following over the past few years, though it has been around for considerably longer. I’ve been attracted to the genre, but had not read any of the newer wave fiction–and so when I saw Clockwork Heart, I decided to get more intimately acquainted with steampunk.

Taya is an Icarus–she flies on state sanctioned metal wings above Ondinium, delivering messages and packages from sector to sector. The scene begins with Taya, resting and contemplating whether she can eat and squeeze in a bath before her sister’s wedding that evening. All her plans for relaxation, however, are rudely interrupted as she sees a wireferry girder collapsing with two people trapped inside the moving car. Icarii are more than just the messengers of Ondinium, but also serve as a rescue and protective force–and as such, Taya rushes immediately to the scene, to try and extract the trapped citizens before the car crashes to the ground below. Taya manages to save both victims, a mother and son, both of the Exalted caste. Shaken and grateful, the Exalted lady Viera Octavus tells Taya that she owes her a debt of gratitude she will not soon forget. As soon as Taya has finished her questioning by the city lictors, she decides to make one final delivery for the night–taking her to the private office of another Exalted caste member, the suave decatur Alister Forlore–and his outcaste brother, Cristof. Coincidentally both are cousins to the Viera Octavus. Soon, Taya finds herself caught up on a wave of intrigue–involving the Octavuses and the Forlores in a political, murderous, complicated scheme to change Ondinium forever.

Clockwork Heart is an intriguing hybrid of genres, defying a simple classification. It is a fantasy novel, drawing on steampunkish setting and technology and some fine world building. At its heart (har-har), it is a character-driven tale, involving the entanglements of family and duty, and the romance between a young woman and two very different brothers. The blend is intoxicating, making Clockwork Heart a stunning debut novel.

The city of Ondinium is as spoke-and-gear driven as the Great Engine that powers it. Divided into three sectors–Primus, Secundus, and Tertius–the city’s three castes stick to their own districts on the face of the Yeovil mountains; the Exalteds in Primus, the Cardinals in Secundus, and the Plebians in Tertius. The wireferries serve to transport Exalteds from location to location, with the Primus district located well higher above the lower districts of Secundus and Tertius. Tertius, at the bottom of the city both geographically and in terms of caste, is characterized by its sooty, dirtier buildings, uneven cobblestone streets, its sky clouded by wires and platforms. All of Ms. Pagliassotti’s descriptions vividly portray life in the city of Ondinium, conjuring a beautiful, if flawed society–almost reminiscent of an Industrial Revolution London. The Icarii, such as Taya, stand outside of the machinations of caste–flying freely between district to district. While the lines of caste are rigidly upheld (each citizen bears the marks of caste upon their face–save the Icarii–and the Exalteds must wear a mask and loose fitting robes in public), this is not to say that Ondinium is a society where the plebians in Tertius are wretched, impoverished beings the Exalteds exploit, while greedily usurping the riches of the city. No, Ondinium is organized–like clockwork–such that no one wants for food or aid, though the Exalteds do live to a higher standard than the commoners below them. At the age of 7, every child in Ondinium takes the Great Examination–determining what their aptitudes are, and which way for them to best serve the city (allowing for a Tertius born child, such as Taya, to rise above her caste). The rationale for the castes is such that the Exalteds earn their status since they have been reborn so many more times than those in the castes below them–and this is the will of their deity, The Lady, so it is not challenged. At least, in theory.

Cristof Forlore, brother to the charming Alister, is a self-imposed outcast–wanting nothing further to do with his Exalted birth, and tired of wearing his mask. He spurns his inheritance and moves to Tertius where he works as a Clockmaster. Cristof’s dissatisfaction is just one symptom that the city of Ondinium is facing times of change and upheaval–and not just through the usual channels. Acts of terrorism, external threats of neighboring lands, and internal politics all characterize the multifaceted problems facing the city.

More important than the concise–and miraculously never confusing–world building, however, is the development of characters throughout this story. Taya is a brave and intelligent heroine, bound to her duty and her station as an Icarus. Though she faces temptation in the form of Alister, she is not swept away by her emotions. Taya’s level-headedness and sense of duty allows readers to connect with her character, as we are privy to her thoughts and emotions (through the limited third person point of view). The cast of characters is increasingly broad, as the many roots of conspiracy and intrigue deepen–but Ms. Pagliassotti’s writing flawlessly identifies and distinguishes between each character, and I had no trouble discerning who was who over the course of the book. Even with such a broad cast, the main characters all are fully developed and realized, feeling real in their motivations, emotions and flaws. The relationships between Taya, Cristof and Alister are splendidly complicated and rich–from attraction to budding romance, brotherly devotion to conflict. The friendship-romantic entanglements only add more dimension to this rich novel–enough to satiate any fan of romance, but not at the expense of the well-paced story.

From a writing standpoint, both symbolically and linguistically, Clockwork Heart shines. The Latin derivations for the setting, even the name of the city are familiar allusions–Ondinium similar to Londinium, the Roman name for London. The namesake for the Icarii, of the Grecian Icarus flying on manufactured wings, is also an apt allusion for Taya’s tale–not just for the face value similarities of mechanical wings, but for Taya’s story. When she flies higher than her station she becomes entangled in a web from which she cannot escape–but instead of plummeting to her doom, as the ill-fated Icarus of myth–she gains her freedom through her own strength. Other touches, from common slang to curses, are impressively imagined and thorough (for example, the “Torn Cards” as a terrorist group, emulating the punch cards used to program the analytical engines of the city)–there are no out of place or awkward colloquialisms here.

Finally, there is the outstanding technological aspect to the book–the mechanisms that drive Ondinium itself. Named for the ondium ore that lies in the veins of its mountains, the City excavates this precious material that serves as the lifeblood of nearly all their technology. Icarii cannot fly without their ondium counterweights, giving them a lighter density; the Great Engine cannot run without being powered by the substance. The mines of Ondinium are nearly tapped out, and conservation is essential. Another fascinating (to me) aspect of the city was the way engines ran–using a system of punch cards to program the large computers, putting me in a mindstate of older database computers of universities in years past which had to be literally rewired for each separate query, or the IBM punched card computers of old. The concepts of having an engine predetermining aptitudes, loyalties, even romantic involvements were fascinating to read, applied here in Ms. Pagliassotti’s world. And, as with each of the characters, the caste system and the settings, the technological aspect to the book only served to enhance the story without becoming confusing or cumbersome to the plot.

While the plot did have some predictable elements, Ms. Pagliassotti always managed to take the story, the characters a step further than other fantasy writers (especially of the urban fantasy persuasion) might, earning my respectful awe. Though I had figured out, in part, the ultimate villain(s) of the tale far before the reveal, there were some surprising developments that occur after the book easily could have ended–and I appreciated that. And, for any qualms I may have about a predictable mystery, the rest of the story is so beautifully written that I could care less. This book is a keeper, and I look forward to reading more from Juno and the talented Dru Pagliassotti in the future.

The streets in the lower sector were darkened by a gritty haze of coal smoke and wood ash and by the crisscrossing cables and iron girders that formed the lowest level of the wireferry transit system. Buildings were constructed with jutting upper levels that formed wooden arches over the narrow streets, leaving only narrow slices of sky open to view like skylights.

And here is one of my favorite scenes:

“Easy, now.” Taya smoothed his sweat-dampened hair and adjusted his glasses. “That was good. That was really good.” She leaned forward and hugged him. “Silly crow. I told you that you could fly.”

He stiffened a moment, then he grabbed her, pulling her close and clutching her as though his life depended on it…

“I still feel like I’m falling,” he said at last, looking up. A gleam of morning sunlight played around the wire rim of his glasses. “I’m afraid to let go.”

For a moment she stared into his pale eyes.

“It’s all right. You’re safe.” Her pulse pounded in her throat. Had anyone ever looked at her so desperately before? She wanted a glimpse behind his mask, and now she knew what was back there–a deep, aching loneliness. “There’s nothing to be afraid of anymore.”

Additional Thoughts: Steampunk is a genre rapidly gaining ground in the Speculative Fiction market. From comics such as The League of Extraordinary Gentlemen to anime like Steamboy or Howl’s Moving Castle, these elements are present in a number of films, games and literature. For more on the genre, check out Heather’s recent steampunk showcase over at The Galaxy Express.

Verdict: Clockwork Heart is a beautiful debut novel, and most likely going to make my Top 10 Books of 2008. Dru Pagliassotti is a highly talented author–and I eagerly await the sequel to this novel. Any fans of fantasy, of romance, or of the steampunk persuasion should buy this lush, stunning novel.

Rating: 9 Damn Near Perfection – I was wavering between an 8 and a 9 for this one, and though technically my analytical mind wants to give it an 8, my emotional side wins over with the 9.

Reading Next: The Chosen Sin by Anya Bast