Another month, another dare! Every month we dare a guest (usually another blogger) to read a book that is outside their comfort zone, chosen by us. When we asked CJ from the amazing The Thrillionth Page blog, which genres she is not used to read and she said “Contemporary” novels, our first thought went to Sugar Daddy by Lisa Kleypas – a book that both Thea and Ana loved.

So, without further ado, we give now the floor to Carolyn Jean: 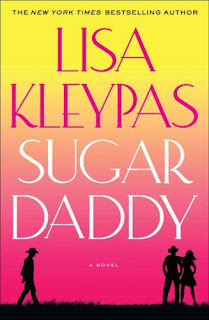 Stand alone or series: First book in a new series by Kleypas

Summary: (From amazon.com)
Liberty Jones has dreams and determination that will take her far away from Welcome, Texas-if she can keep her wild heart from ruling her mind. Hardy Cates sees Liberty as completely off-limits. His own ambitions are bigger than Welcome, and Liberty is a complication he doesn’t need. But something magical and potent draws them to each other, in a dangerous attraction that is stronger than both of them.When Hardy leaves town to pursue his plans, Liberty finds herself alone with a young sister to raise. Soon Liberty is under the spell of a billionaire tycoon-a Sugar Daddy, one might say. But the relationship goes deeper than people think, and Liberty begins to discover secrets about her own family’s past.

Why did we recommend the book: We both really liked the book.

Well, some time ago, naughty Ana and Thea invited me to do a dare. They wanted me to read a book out of my comfort zone. Gasp!

The obvious choice was a contemporary, just because I’d never read one, which seems weird. But I really came into this scene with Outlander and Anita Blake, sort of riding the urban fantasy/paranormal train, and later I added mystery/romance, futuristics and historicals. I didn’t consciously avoid contemporaries so much as I never got attracted to them. My mindset was, UF and paranormal serve up monsters and interesting world building alongside the romance. Historicals, mysteries and futuristics give you other stuff with romance. But contemporaries? Just the romance. Nothing else on the plate. It always seemed to me the meal might be a bit thin.

I can’t tell you how much I looked forward to reading this book every night—a central measure of a book’s excellence for me. I looked forward to this one so much, and it lived so strongly in my mind during the day, it sort of felt like having a new love affair, where you have the sensation of being whisked out of your normal life.

And after I was onto the next book in my pile, I only wished I was still reading Sugar Daddy.

Gosh, I love this woman from the wrong side of the tracks in the big city stuff. Main character Liberty lives with her mother in a trailer park at the book’s open. When her mother dies, 17-year-old Liberty has to fend for herself and an infant sister with no prospects or skills. She’s also sort of obsessed with this guy Hardy from the trailer park, but he leaves to make it big. Just when Liberty’s gotten over him and put her life on a good track with a great guy in Houston, smoldery Hardy reappears.

Sugar Daddy is not a predictable book. At a certain point I thought, this heroine is going to end up with the hero I don’t want her to end up with. Shit, I can’t say anything more than that, except to say that she ended up with the one I wanted. But it was sheer willpower I didn’t read the last page. I was verra tempted. The ending is, as they say, unexpected yet inevitable, as a good ending should be.

One of my favorite things about Sugar Daddy is Hardy’s character; when I finished it and thought back on him, he added up in an exquisite, perfect way. Very satisfying. I won’t say any more, but he’s a fun character to put together in hindsight. And the events.

Liberty is an excellent character, too. She’s sincere, vulnerable, and strong, with a good heart and a one-pointed fierceness about making a better life for her sister and herself. The supporting characters— esp. Liberty’s mother, as well as Miss Marva, an eccentric trailer park neighbor— are refreshing and complex.

I’ve never much gotten to know anybody from Houston, but around the time I was reading this book, Houston was in the news, like with the hurricane, and for a split second I’d have this dim thought like, Oh, no! Liberty…the Travis family…. And then I’d think, No, they’re characters in a book. But they felt so alive.

A few questions for you veterans

There were a lot of pop culture references in here. Is that true of all contemporaries? I liked that. For example, the trailer park mother names the baby sister Carrington, after the Carringtons on the TV show Dallas. (Though there were simultaneous mentions of Nirvana, and I felt a slight time oddness there, as Dallas came way earlier than Nirvana.) Anyway, on the Carrington thing, when Liberty and toddler Carrington finally meet Churchill’s wealthy family, I was so waiting for one of the snootier members to figure out where that name came from and make fun of it. Weren’t you? Maybe I worry too much about little things like that.

Also, there is this last chapter thing, taking place some months later. almost an epilogue, with the happy couple together, and she breaks the happy baby news. It seemed like overkill. Do all contemporaries end with that? A pregnancy or little ones?

Another thing, I read a review of this over at Taja’s, and she felt this slipped slightly over the line to women’s fiction. Do people agree? Is it possible this is not a representative sample?

Great review, CJ – we are delighted that you loved the book! Thanks so much for taking part!

Next dare: Katiebabs has been dared to read The Golden Compass (or Northern Lights), the first book in His Dark Materials trilogy by Philip Pullman – one of Ana and Thea’s favorite fantasy series! 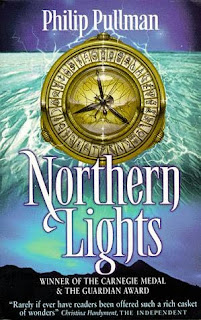