Bubbles and Blossum strike again! When the Amazing Katie introduced me to The Tairen Soul series earlier this year , I don’t think she predicted how much I would fall in love with this fantastic series. Lord of the Fading Lands and Lady of Light and Shadows were her top reads of 2007 and my own favorites of this year. It felt more than appropriate, when we both received ARCs, to organise another one of our infamous Powerpuff Girls’ review (Alas, Buttercup could not join us this time) where I review the book here and she reviews it at her new casa – will we agree or disagree this time?

Title: King of Sword and Sky 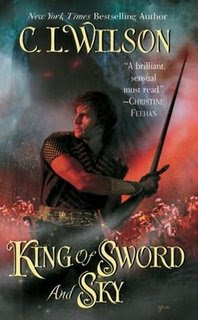 Book 2 – Lady of Light and Shadows

Summary: Returning to the Fading Lands with his Celierian truemate, Rain discovers a dissension among the most powerful members of his own council. As the Eld plot their next deadly strike, Ellysetta struggles to master her powerful magic and discover how to save the tairen, while Rain confronts open challenge to his rule and prepares to lead the Fey army to war.

Why did I read the book: Best Fantasy/Romance series out there. Simple as that.

“To the Victory and life!”

I sat down to write this review and I found myself going through a mental block. Staring at the blank pages for what seemed to be hours, unable to come up with a single opening paragraph that would be catchy, smart and at the same time, conveying how much this book is good, how incredible this series is and how much I want June 2009 to be here like, right now. There is no such sentence and since I already used “Holy Guacamole” (nothing says more “this book is amazing” than holy guacamole) to open my review of Lady of Light and Shadows, I found myself wordless.

Then, to make matters worse, I decided to leave the opening paragraph for the time being and jump right into writing the review proper, with the usual breakdown of the plot. Another block – because there is so much going on in this book, in so many different fronts, it would probably take quite a few paragraphs just to rehash the main plot points. So I will go for listing the most important of what happens in King so that I can get to what I really want to talk about. So basically, we have the Fey, alongside King Rain and Queen Ellysetta making their way back to the Fading Lands. First they must make a pit stop at Teleon to leave Ellie’s family under the protection of the fey Kieran and Kiel. Then, they must cross the Faering Mists towards their home where Ellie must find a way to cure the illness that is killing the Tairen kittens and Rain must start preparing for the war against the Eld that is brewing in the horizon. Meanwhile, the High Mage carries on with his plan to breed babies and we find out exactly why he is doing what he is doing.

Goosebumps. If I had to choose one word to describe my reaction to these books, it would be goosebumps. There is no other series out there at the moment that gives me more goosebumps per thousand words than this one. It has to do with the writing, with the world building, with the precise descriptions and nomenclature and such attention to details that I have seen only in a few choice works of literature: and Lord of the Rings is the one that comes to mind when thinking of comparisons. The Tairen Soul series have an epic quality without ever losing the heart-warming feel of a grandiose love story. I can not even begin to tell you how many goosebump-y scenes there are in this book – to speak of any of them is spoil major surprises (good and bad) and I could never ever do that to other fans of this series.

Suffice to say is that the story once again divides itself in several plotlines – and several points of view. Ellie working tirelessly to find out what is killing the Tairen and Rain fighting the inner politics of the Fey and preparing his people for war. They spend a lot of time apart in this book but each and every scene when they are together is memorable and nothing is lost.

But even if the romance is still amazing and very much central to the story, still everything else that occurs, every other character, be it Fey, be it Mage, be it Human, be it Tairen (yes, finally we get to meet the Tairen, intimately, and let me tell you, they are amazing additions to the story) is interesting and fleshed-out. There is a huge sense of purpose involving everyone and as the story proceeds to its climax, we can’t help but to be immersed in the Fey’s plight.

We learn a lot more about the Fey in King of Sword and Sky. About their cities, their history, the geography of their land, but most of all about the mappings of their soul and what makes them…. Fey.

One thing that is very clear about this series is that there is very little room for shades of grey. There is a very clear demarcation between evil and good, almost in a Manicheistic fashion – where Fey is the epitome of everything good, where they cannot truly be evil and the Eld and the Mage are in the direct opposite end of the spectrum. Usually, as a reader, I prefer stories not to be so black and white – I like my shades of grey with room for people to go either way, depending on their choices. A lot has to be said about C. L. Wilson’s writing because I truly buy the premise here and I hurt every time a Fey hurts at the prospect of losing their soul, at the prospect of killing (the more a Fey kills, the more their soul is tarnished and unless they find their truemate, there is really nothing to be done – it is not fair to the warriors but it’s the way it is) and at the prospect and hope of finding a truemate. The Fey give me spine-tingling goosebumps and I absolutely adore them. The Fey are on the good side of the Force and the Mage on the Dark Side and I have no problems with that.

The Queen of Hearts

Ellie has come a long way since her Cinderella origins way back in Lord of the Fading Lands. Now that we now that she has almost an unlimited magical power and being the first Female Tairen Soul ever, sometimes she may come across as a too-good-to-be-true character. But what more could we expect? She IS the daughter of two of the most ancient and powerful Fey ever AND she was bred by the most powerful Evil Mage of all time – how could she ever be different? She couldn’t. Having said that, even if she is the paradigm for good and powerful, still she learns and changes a lot trough the series. The mating bond has not yet been completed and it’s truly because she has yet to ascertain who she really is. It is a long process, in a long, rocky road. She is so headstrong sometimes she makes rushed decisions that cost a lot – and she now must learn that anything that happens to her happens to Rain too. And she comes to understand that as much as the mating bond is a gift and blessing , it also means that you are no longer alone – in any capacity and everything that you do, everything that you are, has repercussions and consequences to both halves of her soul – the one inside her and the one inside Rain.

The King of Spades

Now. With everything that is going on, with everything that Ellie must go through, still this book is very much Rain’s story. It is finally time for him to become the King he is supposed to be. Having spent the past 1,000 years apart from his people, dealing with his madness, his grief and his guilt for killing millions over a moment of weakness in the last Mage War, he finally comes to comprehend the political implications of this separation and the toll that he must pay to become king de facto rather than king in name only. The key word here is “change” – how can he convince his people that he is fit to finally be the king in this time of need when they are so set in their ways, they cannot see the need to adapt and change so that they can survive? He must send across the message that long-stand allies need their help once more and that denying this help is a huge mistake and one that can have serious results.

At one point he says:

beginning with himself, spreading through to his friends. He makes his choices with a clear mind and a clear conscience – sometimes he has to put his truemate above all and that also has serious repercussions. But when he dons, for the first time, his ancestors’ armour, the one used by every rightful king before him and calls the Fey to war and yells his brand new motto: “To Victory and Life”? Again, goosebumps. He dons the armour and sheds the skin of his old life, forever.

At the end, Rain has completed his journey coming full circle and becoming the King he is supposed to be. Now it’s Ellie’s turn and I am seriously contemplating the possibility of hibernating until June, when the final book comes out.

Can I just say: the whole book? No? Ok, so look forward to this:

The first time in 1000 years that Gaelen sees the Fading Lands – when he gets to the other side of the Faering Mists? Tears.

Someone gets pregnant. That scene was extraordinary in more ways that I can count.

The description of the Warrior’s Academy and some of the lessons that take place there. One word: cool.

The reason why the High Mage wants Ellie so badly. The clock is ticking.

The scene at the Well of Souls. I will say no more.

And you must brace yourself because the torture that Shan and Elfeya , Ellie’s parents, go through this book is horrendous, dark, violent, gut-wrenching. The High Mage needs to die a Very.Violent.Death and I don’t even care who kills him. As long as he dies. In pain. A Lot of pain.

Additional Thoughts: You still have time to leave a comment – here – and win one of 5 copies of King of Sword and Sky.

Reading next: Blue-Eyed Devil by Lisa Kleypas for our upcoming Lisa Kleypas Week – it is a Lisa Kleypas Madness with plenty of reviews, guests, an interview with Lisa and a giveaway of Seduce me at Sunrise!

Book Review: The Sky is Everywhere by Jandy Nelson