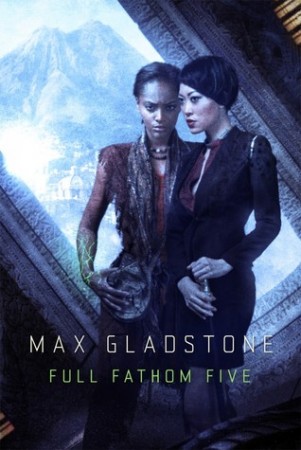 On the island of Kavekana, Kai builds gods to order, then hands them to others to maintain. Her creations aren’t conscious and lack their own wills and voices, but they accept sacrifices, and protect their worshippers from other gods—perfect vehicles for Craftsmen and Craftswomen operating in the divinely controlled Old World. When Kai sees one of her creations dying and tries to save her, she’s grievously injured—then sidelined from the business entirely, her near-suicidal rescue attempt offered up as proof of her instability. But when Kai gets tired of hearing her boss, her coworkers, and her ex-boyfriend call her crazy, and starts digging into the reasons her creations die, she uncovers a conspiracy of silence and fear—which will crush her, if Kai can’t stop it first.

Why did I read this book: OMG I love this series so much. Two years ago, the first book in the series (Three Parts Dead) made my top 10 and I really enjoyed the second one (Two Serpents Rise) too.

Even though each book in the Craft Sequence series by Max Gladstone can be read as a standalone, they all take place in the same world, share the same background history and have a thought-provoking underlying thematic core that examines religion and worshipping from several perspectives – ranging the deeply personal to a wider political, social and economic scope.

They are books about magic, law and relationships featuring a super-diverse cast of characters. They are also incredibly fun books in a genre that I could only describe as a Legal Fantasy Thriller.

Full Fathom Five is the third book in the series and one that navigates well that line between the personal and the collective spheres. It has a dual narrative, with two very different characters, Kai (a trans woman) and Izza, sharing the viewpoint.

In the small island of Kavekana, Kai is a priestess that builds idols to order. In a world where Gods are supposedly gone for good after being vanquished by Craftspeople, an idol is the next best thing: they are not conscious creatures (therefore not as dangerous or important as Gods could be) but still perform the functions and all the give-and-take expected from a God.

One night as she is about to leave the office, Kai sees one of her creations dying and as she tries to save her, she hears words that are not supposed to have been said. The idol dies anyway, Kai is seriously injured and in the aftermath, she is shunned and temporarily (she hopes) forbidden from working with idols. But those words she heard will not leave her be and as she starts investigating what happened that night, she comes across a secret that might change the future of her beloved Kavekana.

On other side of the island, Izza is a young thief and a storyteller. She is a de-facto leader of a group of thieves but her time is growing short. Because she is about to reach an age where she is liable to be captured by the police and forced into one of the Penitent statues that guard the island and work as reformers, all her thoughts are on leaving the island and that life behind. Especially now that her goddess – the Blue Lady – has died, just like countless gods that have come before.

The two heroines might live on the same small island but their worlds could not be more different.

Kai is at the top, she is privileged with the knowledge and the power of those who control the island. She loves her island, she believes that the work that she performs is useful and good in the great scheme of things. Only when is stripped of her position, she has her eyes opened to the different ways people live on the island.

Izza has always known the underbelly of the island i.e. the poverty, the harsh law enforcement and the unfairness of a system that has little time for the poor. Her storytelling is powerful, her faith – in a world where faith is power – has given life to gods and goddesses. That they all have died and left her and her friends bereft is one of the reasons she wants out so much. She has no love for this island that has shown her little love in return.

The thing is though, a change must come. Or Kavekana will not survive: its people, its own particular history could be destroyed or worse, incorporated by one of the many conglomerates that now control the world. When Kai and Izza eventually cross paths, they will realise they have more things in common and that faith, power, responsibility and loyalty are all intermingled into who they are.

I might be making Full Fathom Five sound as though it’s a dry, joy-less novel when in fact it is anything but. There is joy in following these two characters navigate their world and learn new things about it and about themselves. The investigating of the mystery surrounding the life and death of the Blue Lady is engaging and thought-provoking. I’d also be remiss not to say that it was a pleasure to see the three amazing female characters from previous books making not only an appearance (Yes! Hello Theo, Cat and Ms. Kevarian, I missed you) but also having importance within the story. In addition, there is no amount of words to express the horror one experiences when reading about the Penitents, the sorrow one feels when it comes to certain events or the pleasure of seeing all the plotlines coming together in the end in such a clever way.

If I have one small criticism about the book, it would be to remark on how the story felt a bit overlong in parts, protracted even. I feel there was nothing gained by adding a minor character’s point of view, as an example.

That said: Max Gladstone is a fine writer and these books are highly, highly recommended.

Notable quotes / Parts: A Snapshot of this world:

“The mainland’s a dangerous place,” she said. “If you live and work in the Old World, gods demand sacrifices to support themselves. If you’re in the New World, the Deathless Kings and their councils charge heavy fees to fund police forces, utilities, public works. If you travel from place to place, a horde of gods and goddesses and Craftsmen chase after pieces of your soul. You can give them what they want— or you can build an idol with us, on Kavekana, and keep your soulstuff safe here. The idol remains, administered by our priests, and you receive the benefits of its grace wherever you go, no more subject to gods or Deathless Kings than any other worshipper of a foreign deity.”

Reading Next: The Story of Owen