Title: Mine to Possess 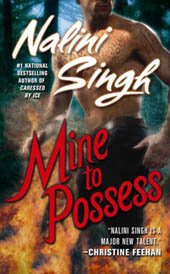 Summary:Clay Bennett is a powerful DarkRiver sentinel, but he grew up in the slums with his human mother, never knowing his changeling father. As a young boy without the bonds of Pack, he tried to stifle his animal nature. He failed…and committed the most extreme act of violence, killing a man and losing his best friend, Talin, in the bloody aftermath. Everything good in him died the day he was told that she, too, was dead.

Talin McKade barely survived a childhood drenched in bloodshed and terror. Now a new nightmare is stalking her life–the street children she works to protect are disappearing and turning up dead. Determined to keep them safe, she unlocks the darkest secret in her heart and returns to ask the help of the strongest man she knows…

Clay lost Talin once. He will not let her go again, his hunger to possess her, a clawing need born of the leopard within. As they race to save the innocent, Clay and Talin must face the violent truths of their past…or lose everything that ever mattered.

Why Did I Read the Book: I LOVE this series

The Forgotten: Once upon a time, before the Silence Protocol was implemented the Psy dreamed, cried and laughed. They also loved and sometimes they loved people form other races. It was not that unusual to have Psy mated with changelings, marrying humans and therefore mixing their blood. These mixed blood Psy were the ones that raged against the Silence Protocol, a program that would wipe their emotions forever. In some basic level, even those understood the necessity of the program in order to protect their race from madness but they also understood the cost. These two factions came to an impasse but the majority chose to remain in the PsyNet and to embrace Silence. No one knows what happened to the others. These days most Psy believe these rebels were neutralized .Forever. There could be no dissent. But that is just another lie, isn’t it?
_________________________

Clay is one of the DarkRiver leopard pack Sentinels. A powerful man with a hole in his life: he lost his best friend Talin, when they were children. A loss he has never been able to get pass. Living on the edge of his own darkness, if any one of the Sentinels was ever close to become a rogue – living outside pack, becoming more animal than human – Clay was the one. Clay is a man who indulges in the madness whenever he wishes, seeing ghosts, still searching for the one he misses most in the world. Until the day his belief that she was dead is shattered into one million pieces when Talin shows up – looking for him. For his help.

Talin is a social worker and there are kids disappearing from all over the country and their bodies are reappearing with their brains missing. When one of her kids, Jonquil, goes missing, she is so desperate she decides to ask for the help from the most dangerous person she knows: Clay. Her childhood friend. Her decision to go looking for him will put things in motion and get their lives back on the track that was always supposed to be.

Talin and Clay first met when Clay was living in the confined space of an apartment lot with his mother – unable to shift into leopard form because the mere sight of it hurt his mother who had lost her changeling mate. A trapped animal inside and out, until when he was 9, he meets this 3 year girl who soothes his beast and from that day onwards she becomes his – his best friend, his future, his to protect and to adore. They are two lost souls that find solace in each other. It is this sense of protection that kicks in and changes their lives when he finds out that her foster father was abusing Talin. Nothing will stop his leopard form protecting her. He kills the father in a savage attack in front of her eyes and is taken to prison where he spends the next four years. Talin is left behind to try to cope with such a violent act from the person she trusted the most to keep her safe, away from violence. Unable to forget she fakes her own death, nearly destroying both of them in the process of separation. In the years to come, Talin becomes exactly what Orrin, her father has told her what she was – a slut. Sleeping around with countless, nameless men, punishing herself for not being pure. Se is truly psychologically sick and it hurts so much to read about it, especially when it’s clear that she thinks Clay would never forgive her if he ever knew.

But now she needs him. Jonquil’s disappearance is killing her and in the end , this is only an excuse for her to go back to where she belongs: at Clay’s side. But things are not easy. She still fears him, she fears herself and what she has done. And she is also dying. Her brain is breaking down. She has dissociate states where se does not know what she is doing and most of them lead to sexual encounters with strangers – her mind acting up on those issues coming from her abusive foster father.

Clay is shaken to his core every time he is near her and smells her fear, it tears a piece of his heart. He feels she rejects what he is, just like his own mother did. But what Clay doesn’t understand is that Talin was but a child when she was faced with his most violent side. Clay up to that moment, had been the only person she always believed would never hurt her, and to see him losing control like that snapped something inside her, something that needed years to understand.

Now that she may be ready for him, they may not have time. But once Clay gets pass the hurtful truths of what she has done, the reality settles in and he change gears into hero mode, and it is easy to recognize the facts: She is the brat, he is the bully and they belong together. Simple as that.

This was the hardest installment in the Psy-Changeling series to read because the psychological problems Talin had felt so real and were very distressing for me as a reader. It hurt me to read about the things she went through and above all, it hurt me to read Clay’s inner thoughts, his struggle with learning how much she suffered and how he wasn’t there. One of the best thing in this series is how Nalini Singh develops this sense that these changeling males are all about protecting their mates, putting them above all and the fact that Clay could not protect her killed him inside and therefore made me hurt so, so much. It was painful but it was also rewarding when they were finally able to let the past go and start their lives together, as it was supposed to be from the start.

All of this intertwined with the investigating of the children’s disappearance and their desperate search for Jonquil until they find out that everything has to do with the Forgotten.

From the Psy perspective, we learn Councilor Kaleb Krychek, as a cardinal telekinetic, has a natural affinity with the NetMind (we learned about the NetMind in Visions of Heat) and its counterpart the DarkMind. If the Net Mind is light and goodness, the DarkMind held all the violence that Silence tried to suppress. That this one man has the power to communicate with it – just like Faith communicate with the NetMind does not bode well in my opinion, Kaleb is turning out to he a bigger player and lord only knows for which side. The DarkMind is pure evil and it spoke to him when he was 7 years of age. Plus he is planning to take over the council – but what for? Good or evil? Being the geek that I am I can not help but to wonder if there is a clue in his surname – as an X-File fan I am instantly reminded of another Krychek – one that we never truly knew if he was good or evil, having the potential to be either. I remain suspicious but with an open mind.

The action comes to a climax when Clay and Dorian rescue Jonquil – with the help from someone from the inside. As we know from Caressed by Ice , Ashaya is a powerful M-Psy working on a Protocol to unify the Psy in a hive mind. In Mine to Possess we learn she is working under duress and her helping Jonquil’s escape comes with a price – the leopard pack must rescue her own son who is being held hostage by the Psy as leverage for her compliance.

That sets things in motion for Hostage to Pleasure – Ashaya is Dorian’s heroine and the downfall of Protocol 1 is at the center of the action in that book.

This is a powerful story of love lost and found again, of redemption, of evil and good and of soul mates. It is heart wrenching but also very heart warming. It made me cry. But it also made me smile.

Notable quotes/ Parts: I think one of the most painful scenes I ever read in any book, not only romance novels was when Talin was telling Clay how she called for him during those nights when she was being abused. She called his name but he never came because she never really told him what was going on because he was only 8 then and she thought he would not cope or survive and she needed to protect him. She knew that it was her choice, but still deep inside she blames him for never coming to her and she opens up her heart by telling that to him and it hurts him so much. And he says:

“I am a leopard” he said “our women are everything to us. I would rather die than have you hurt. Don’t ever try to protect me again”

“You loved me–then what right had you to leave me? What right–answer me–for the poor fancy you felt for Linton? Because misery, and degradation and death, and nothing that God or Satan could inflict would have parted us, you, of your own will, did it. I have not broken your heart–you have broken it; and in breaking it, you have broken mine”

Verdict:This is yet another fantastic installment in a fantastic series and if you have not started reading it, you do not know what you are missing.
Rating: 8, Excellent.

Joint Review: In A Glass Grimmly by Adam Gidwitz