Book Review: The Huntress – Year One

Title: The Huntress – Year One 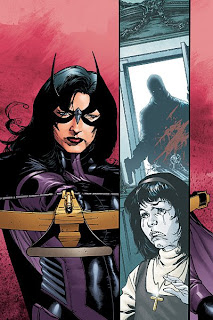 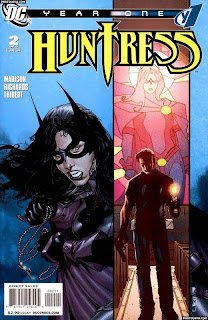 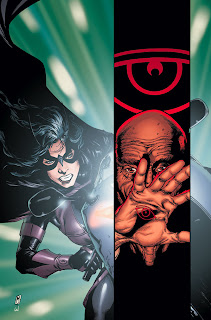 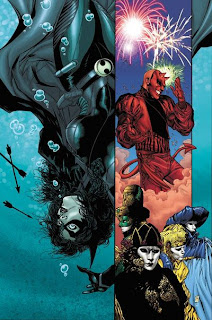 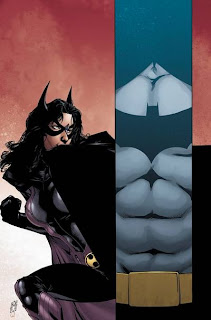 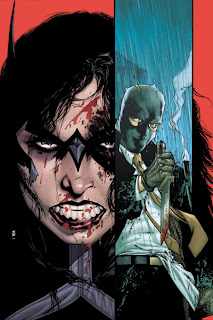 Stand Alone or Series: Huntress – Year One issues #1-6, in a new miniarc about the character’s origins

Summary: (from DCComics.com)
As the last survivor of a family eliminated by bloody rivalries among the mobs of Gotham, young Helena Bertinelli was sent overseas for her own safety – but began a quest for vengeance instead. Breakout writer Ivory Madison teams with Cliff Richards (WONDER WOMAN) for a continent-spanning story that reveals one woman’s journey from hunted to Huntress!

Why did I read this book: I’ve always liked Huntress but haven’t really known too much about her outside of seeing her in the cartoons, and having read about the troubled, darker vigilante in Birds of Prey and Batman comics. So, I wanted to see how her origin storyarc would go.

So, I came into this miniarc knowing a little bit about Helena Bertinelli, aka The Huntress. The last of the Bertinellis, Helena has grown up apart, angry, and trained by her assassin cousins. She has a huge chip on her shoulder, and as such, her methods are questionable (as seen with Oracle’s reluctance and distrust of her in the Birds of Prey series). So, when I saw Year One at my local store, I eagerly scooped it up–not to mention the art is stunning, penciled by Cliff Richards.

Issue 1, “Girls Can’t Be Pope” was solid, but at the same time left me a little wanting. The scene opens with Helena on the Asaro farm in Sicily, hunting deer with her crossbow. We see flashbacks of Helena as a child with her family–abusive father, complacent mother, annoying brother–at the dinner table, enjoying their last meal together before a masked hitman kills her entire family. Instead of killing Helena, however, he takes her crucifix, and leaves her to watch her mother bleed to death in front of her eyes. The images here–the blood splattered on the floor, mixing in with the tomato sauce and spaghetti from their dinner, Helena crying in rage and grief–is evocative, and incredibly powerful. Cut to years later, on the eve of Helena’s 21st birthday. Her Uncle Tony comes for a visit, to see if Helena really is still alive, and to let her know that her trust fund kicks into her possession on her birthday–the entire Bertinelli fortune, as she is the last standing member. All Helena need do is return with him, and speak with the Pope (no, not that Pope, but the Sicilian mob head). Helena isn’t interested…until dear Uncle lets her know that her cousin Sal–the one that raised her and took care of her as her older brother–is being held in prison. Que a series of flashbacks to Helena’s past, showing her as a skilled hunter, and discussing the male oppression of language (actor versus actress, hero versus heroine). I found the whole Huntress (wait a minute, Hunter?) as super-feminist line somewhat heavy-handed. Ivory Madison’s writing in this issue was on the whole nicely done, but had all the subtlety of a cast-iron skillet pounding on the reader’s head. Huntress is damn good at hunting, and she needs no man to save her. This nitpick aside, the first issue was easily solid enough to warrant me reading on…and I’m glad I did.

Issue 2, “La Donna e Mobile”, is the comic that sucked me into this story. For a 6 issue miniseries, the story becomes very complex here, much to my delight. “La Donna” follows Helena as she unsuccessfully tries to bust Sal out of prison, and as she finds out the truth of her inheritance. Again we are treated to flashbacks of Helena’s past–this time at the Opera house with her tutor, Justina. Helena asks why the opera doesn’t have any women heroes, to which her tutor replies that there once was a woman pope who dressed like a man, but after her death she was discovered, and is now ignored by history. In the opera, Justina tells Helena that women don’t matter unless they are young, innocent, and die–and that it is Helena’s job to outlive them all. Again, the writing is somewhat melodramatic, but the significance of this scene and its influence on Helena is incredibly poignant.

After Helena repeats this information at the dinner table with the Asaros (and again showing how close a relationship Sal and Helena have), the narrative switches back to realtime. An important plotseed here is Helena meeting her childhood friend, Tony Angelo–and immediately a spark is kindled between them, in the doomed, tragic love sort of way. Tony is the son of Nino Angelo, a powerful Mafia lord in his own right, and the Boss of Gotham. The plot thickens, as the most pivotal, defining scene in this issue is when Helena returns to her shared room with her cousin Monica (as she is staying with her Uncle Tony until her birthday)–and Monica has been abused by Nino Angelo. Monica, scared and angry tells her father that it was Helena who beat her up–and he is ready to kick her out of the house. When Helena confronts Nino about his rape and abuse of a 16 year old, he levels a gun at Helena and tells her there is nothing she can do about it. I appreciated the honesty of this scene–of how the victim blames the woman trying to do the right thing, and how Helena reacts to the situation, taking action instead of repressing anger.

Here, Helena makes her first choice down the path to becoming The Huntress on that evening of her 21st birthday. She swoops in to Nino’s room, and beats him to a pulp in his bed.

As Helena has reached legal age, she departs to claim her inheritance…only a meager $2 million. She is pissed; for a major crime family, the interest earned on the fortune alone should have been more than this amount. Someone is fucking with Helena, and she is not having it.

Issue 3, “Respect”, shows that Helena’s investigation leads her back to the Opera House, where the ‘hand’ is receiving a new finger–in a cryptic message. Helena manages to steal back her inheritance, and an old friend leads her to the knowledge of who ordered the hit on her family 12 years before. With a new mission and purpose, Helena dons the Huntress suit, and makes her way to the man responsible, lending over to issue 4, “To the Edge”. Revenge, as it turns out, isn’t as sweet–or complete–as Helena dreamed. In a bar, she meets a familiar face: Barbara Gordon (pre The Killing Joke) on an exchange in Italy from the U.S. Attorney’s office attempts at small talk with the brooding Helena. It is in this exchange that I finally felt the real Helena Bertinelli shone through Ivory Madison’s writing, not forced or over the top, but natural, cool, and so very…Italian.

Still, Helena’s job is not finished, and her thirst for justice has yet to be quenched–when she sees the hitman responsible for the slaughter of her family, she has a new purpose driving her…and he leads her back to Gotham.

Issue 5, “The Hunted”, leads Helena to–you guessed it–Wayne Manor. Helena sees Bruce Wayne cutting a deal with local mob boss–and her love Tony’s father–Nino Angelo. Enraged, Helena tries to discover what they have been conspiring about. More familiar faces emerge here–Selina Kyle puts in a memorable appearance in a fight between Huntress and Batman (watch for the exchange between gals here, it’s worth the purchase price alone). Complications are furthered between Helena and Tony, with heartbreaking consequences for both of them. And, the hitman from Helena’s past is proving problematic for her, leading up to the dramatic conclusion in Issue 6 “The Prodigal Daughter Returns”, in which everything comes full circle, so to speak.

Overall, I found Huntress: Year One to be a wonderful investment. Although the writing could at times feel overly-dramatic, the plotting–especially considering this is a six issue mini-arc–was beautifully executed. The series really picked up by the fourth issue onward, and proved surprisingly complex. There were moments of brilliance, especially in terms of artistic depiction of Helena and her past. The scene in the first issue with the slaughter of the Bertinelli family, the scene later in issue 5 with Tony Angelo screaming at his wife to dye her hair black and be more Italian (and the image of his wife crying in the bathroom while trying to make Tony happy), or Helena’s final retribution in issue 6 with the hitman…all of them are emotional and raw, punctuated by the strong, vivid art of Cliff Richards, and the beautiful noir-like quality of Ivory Madison’s writing.

I felt that I got much more of a sense of Helena Bertinelli over the course of this miniarc. The contradictions in her character are explored nicely in Ms. Madison’s work; for example, apologizing to Barbara that it is not Helena’s job to judge, and that God will do that, or later with Batman when Helena remarks that his lack of faith shows his lack of morality. And yet, Helena dons her suit, killing and maiming those whom she believes deserve it–judging and exacting justice how she sees fit. The events that have shaped her and led to her baptism as The Huntress is a part of her now, in a story that isn’t a far cry from Bruce Wayne’s Batman. I also found the other character cameos–particularly the involvement of the strong female characters Batgirl and Catwoman–added nice touches to the story.

Verdict: Solid origin story for a solid character. I definitely recommend this arc to any fans of superheroes, especially of the vigilante, female persuasion (to be released in graphic novel format later this year).