GayYA.org is a forum recently created to celebrate everything LGBT in YA. Throughout April, many bloggers and authors have written awesome guest posts. This review is our contribution to this worthy cause. 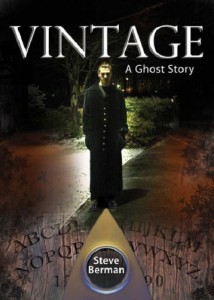 In a small New Jersey town, a lonely teen walking along a highway one autumn evening meets the boy of his dreams, a boy who happens to have died decades ago and haunts the road. Awkward crushes, both bitter and sweet, lead him to face youthful dreams and childish fears. With a cast of offbeat friends, antiques, and Ouija boards, Vintage offers readers a memorable blend of dark humor, chills and love.

Vintage was finalist for the 2008 Andre Norton Award for best young adult speculative fiction by the Science Fiction and Fantasy Writers of America and in the category of Best Novel for the Gaylactic Spectrum Awards!

Why did I read this book: We were invited to take part on the Gay YA readathon and this book was on Thea’s radar – she recommended it to me.

I was ecstatic when we were invited to take part of the Gay YA blogathon: it is a worthy cause and we love to be part of worthy causes. Then it came the part where I had to decide which book to review. All I knew is that I wanted to review a book where the main character was gay and although there are a good number of YA LGBT stories being published right now, this number is nowhere near ideal. Not to mention that sometimes I feel like there is a choice to be made when picking a LGBT book to read: as unfair as this impression might be, the stories seem to be either “issue” stories, in which a character has to deal with the outcome of his coming out and with homophobia, or they are “fairytale” stories, in which a character’s sexual orientation doesn’t matter and homophobia doesn’t exist in the context of these stories (hence the “fairytale”). Just to clarify, I have absolutely nothing against either, as the truth is quite the contrary. Both are important in their own way: the former, because issues like homophobia are unfortunately part of our reality and something a lot of kids have to go through every day; the latter because “fairytales” represent the world as it should be and are, if anything, inspirational.

Having said that, there are stories out there can do be both and I wanted to pick one for this review. I believe Vintage to be a great example of what I was looking for – it is a contemporary ghost story with a heavy romantic arc (a “fairytale”), and it never loses sight of the hardships that its main character faces as a gay teen, but accomplishes this without making “issues” the central theme of the book.

The story follows a lonely gay teen that is a bit of a goth and a high-school dropout who works at a vintage shop. After his parents discovered he was gay and dubbed him a “sick child,” he has run away from home and lives with his aunt. Scared that his aunt might react in the same way as his parents, he’s never told her the reason why he has shown up at her door – although he is not ashamed of his sexuality. Rather, he has wholly accepted himself and found a close circle of friends that offer the external acceptance that has been denied by his family. He is lonely though and on the lookout for a boyfriend whom he could do boyfriend-y things like going out to his favourite café together and you know, make out and stuff.

One day, walking alone in a deserted road, he meets this very hot guy (in vintage clothes) who later turns out to be the ghost of a gay boy who died in the 50s. At first he is ecstatic to have found someone to share things with but soon it becomes clear that the situation is not exactly ideal, not only because the guy is dead but also because he doesn’t seem to be looking for a healthy relationship per se (leading to many scary scenes). To complicate matters even further, our protagonist starts to fall in love with his best friend’s brother, amplifying the tension considerably.

The ghost story is perhaps the central aspect of this book: it is what moves the narrative forward as it frames both the plot and the main character’s arc. With regards to the plot, Vintage is a highly effective traditional ghost story (with Ouija boards!) which is both scary and sad, and the novel progresses as the boy and his friends investigate the death of the ghost and his past. But the plot also provides a mirror of sorts for the character to realise certain things: part of falling for a ghost comes from wanting to fall in love, but also from wanting to escape reality. Having to deal with a living boyfriend on the other hand, means getting out there, potentially getting hurt, having to come out to his aunt and everything that he had been trying to avoid. I appreciated how the reactions of his parents were extremely hurtful to him and have become an essential part of who he is and an essential part of his story, but that hurt, although present and acknowledged, is not the most important nor what defines him. Instead, we get this sweet guy, who just wants to love and be loved.

In the end, the rewards are awesome to the main character and also to the reader. The romance turns out to be sweet and cool and heart-warming with the added bonus of very hot making out scenes. There is much to love about this book, and love it I did.

Notable Quotes/Parts: Shallow person that I am, the making out scenes were cool.

Reading Next: Hold me Closer, Necromancer by Lish McBride