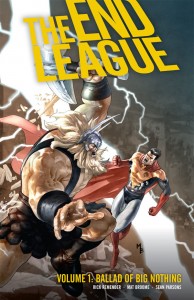 Title: The End League – Volume 1: The Ballad of Big Nothing

A thematic merging of The Lord of the Rings and Watchmen, The End League follows a cast of the last remaining super men and women as they embark on a desperate and perilous journey through a world dominated by evil, in hopes of locating the one remaining artifact that can save humanity – the Hammer of Thor.

How did I get these books: Review copies (of Vol. 1 & Vol. 2) from the publisher

Why did I read these books: Did you read the blurb? Touted as a merging of Tolkien and Moore, I was intrigued…and also more than a little skeptical. Those be big words, son. It was with nervous excitement that I headed into The End League…

It’s the end of the world as we know it, and it’s all Astonishman’s fault. After following the instructions of the dread Lexington, Astonishman has unwittingly unleashed the apocalypse – hurling a nuclear warhead at what he believed to be murderous alien creatures, the blast off alien engines and causing an unprecedented explosion that altered the earth’s axis, killed the majority of the population, and mutated 1 in 10,000 in the ensuing radiation. Now, years after the Green Event, Earth is a ravaged wasteland, where refugees fight for food and live under the tyrannical fist of Dead Lexington – yes, he who tricked Astonishman into destroying the world. To set things right and to vanquish Lex once and for all, Astonishman and his ragtag team of superheroes can only hope for god-alien Thor’s help – with Mjöllnir, Thor’s Hammer, Earth and humanity might be saved.

Ok, so The End League is not exactly Watchmen or Lord of the Rings. (Not even remotely – I have no idea how LotR even draws a comparison here. At least I can kinda-sorta see how one might say there’s an itty-bitty drop of Watchmen in this book. If you squint real hard and look at the story from a few hundred feet away. In the dark. Maybe.) From a storytelling standpoint, The End League has promise, but is somewhat underwhelming. I loved the idea of the world’s most beloved superhero unwittingly unleashing the apocalypse on the planet – borne of the best intentions and all that jazz – and I like where I think Remender was heading with a group of superheroes fighting an impossible battle after the world has ended. And yet…the story lacks a certain cohesiveness. There are clever ideas throughout – the origin of the Norse “Gods,” the relative/popular nature of what defines evil, demons from Hell running amok, etc – but they never really work together. Instead, these disparate threads clamor for attention, making for a cacophonous, disjointed reading experience. There’s also a lot of jumping back and forth in time, from character to character (half the time, we don’t even know who these characters are – names or otherwise) which is distracting and gives the book an uneven feel.

But the story isn’t the worst part.

No, the reason why The End League suffers so badly (and the reason why ultimately the series is a DNF for me) is because of the incredibly stilted flatness of its characters. And in a book like The End League, the characters have to reverberate with readers in order to truly work. I’m all for new realms of superheroes/villains; there are no rules already in place, no stifling continuity or character presets to restrain a writer. Take Mark Waid’s Irredeemable (and Incorruptible), for example – his take on superheroes works because he makes the characters work. Waid focuses on the fragile superhero psyche, giving insights to the Plutonian’s past and what made him the unstoppable force of death that he is at present. In contrast, Rick Remender just doesn’t quite pull it together. His characters simply fall flat, the writing clunky and dry. For the first two issues, all readers hear about is how guilty (and shockingly – if subconsciously – narcissistic, I might add) Astonishman feels about destroying the planet whilst marinading in his dour melancholy soup, his hubris the downfall of the entire planet. And good GOD, he’s boring. Instead of illustrating Astonishman’s horror at what he’s done, Remender has him internally monologue about it – and that’s never, ever good.

The real problem with Astonishman, and the rest of the marginalized league characters, is how simplistic and two-dimensional they are. There’s no movement, no true development of these characters – rather, they all feel like pontificating talking heads to advance the wafer-thin story. Writing like this, for example:

“Your machines ripped the information from my mind. You always feared Brian. Feared he would inspire the people to rise against you. Soon you’ll see that in your craven assassination you’ve only made him a martyr.”

“This place reeks of your impotent values. This citadel of seclusion – a museum of the ineffectual. A trembling last finger gripping the edge of a bottomless cliff. A prison to wait for an inevitable failed conclusion.”

Yeesh. I’m not even going to get into an incredibly awkward proclamation of luuuuurve at one point in the second issue…suffice to say, I was not thrilled.

To add insult to injury, the characters are all incredibly similar (in name, appearance, and powers) to their DC big brothers and sisters – Astonishman:Superman, Lexington:Lex Luthor, Divinity:Wonder Woman, and so on and so forth. Perhaps it would have been better if these were not such transparent analogues for DC’s JLA – but I doubt it.

On the bright side, however, there is no denying that the art in The End League is simply gorgeous. Mat Broome, in his return to the world of comics, does a phenomenal job with his strong, clean art – as do the colorists with the vibrant hues and textures they give to each frame of the book. Halfway through the fourth issue, Eric Canete (of Iron Man fame) takes over with his own distinct, very different sketchy style, which is equally gorgeous if in a different way.

Notable Quotes/Parts: The most notable part of The End League is Mat Broome’s art. Check it out: 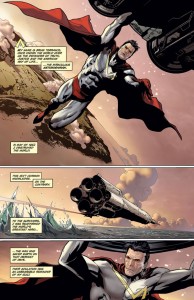 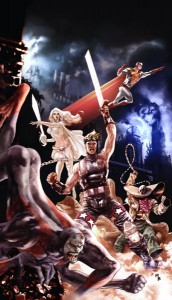 You can check out the first three pages of The End League Vol. 1 at Dark Horse’s website, HERE.

Additional Thoughts: Lots of goodies on the Dark Horse site – check out the official trailer for the series HERE.

You can also read interviews HERE.

Verdict: While the art was superb and The End League held a wonderfully promising premise, I just couldn’t care enough by the end of the trade to continue with volume 2. Hence, the reason this is a single review today instead of a double feature. Thems be the breaks. (Although, I will say, I did enjoy the ending of issue 4)

Reading Next: The Passage by Justin Cronin

Over at Kirkus: Short Stories for the Hugos