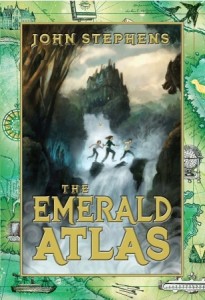 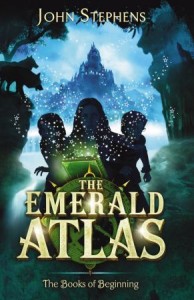 Kate, Michael, and Emma have been in one orphanage after another for the last ten years, passed along like lost baggage.

Yet these unwanted children are more remarkable than they could possibly imagine. Ripped from their parents as babies, they are being protected from a horrible evil of devastating power, an evil they know nothing about.

Before long, Kate, Michael, and Emma are on a journey to dangerous and secret corners of the world…a journey of allies and enemies, of magic and mayhem. And—if an ancient prophesy is correct—what they do can change history, and it is up to them to set things right.

The Emerald Atlas brims with humor and action as it charts Kate, Michael, and Emma’s extraordinary adventures through an unforgettable, enchanted world.

Stand alone or series: Book 1 in the Books of Beginning series

Why did I read this book: It came highly recommended by a friend, the blurb sounds fantastic, and early reviews have been really positive (The Emerald Atlas made Amazon’s best books of April list, with a number of big-name comparisons – including Rowling’s Harry Potter and Pullman’s His Dark Materials). How could I resist?

Kate, Michael and Emma are three children born into a home with a mother and father that love each of their children very much – but one cold Christmas Eve, their idyllic world is shattered. Kate, the eldest of the children, can only remember a glimmer of her parents; her mother’s perfume, her warm and tearful embrace before having to give the children over to another guardian for their own protection, away from the maleficent forces that strive to keep the children away from fulfilling their destinies. Since that fateful winter’s night, the children – whose surname has been mysteriously shortened to just the letter P. – have been shuffled from orphanage to orphanage. Although Michael and Emma were too young to remember their parents, Kate at 14 years old keeps the memory of her mother and father burning brightly for her younger siblings, clinging desperately to her promise that she will take care of them always, and the hope that one day their mother and father will be reunited with them once more.

After their stint in their latest orphanage and thwarting another dreaded set of would-be parents with a strange affection for swans, the P. children are sent to the far, mysterious orphanage of Cambridge Falls – a water-surrounded, time-forgotten land where nothing is as it seems. It is here, under the care of one Dr. Pym that the children find themselves sucked into a world of impossible magic. When the siblings find a mysterious green-bound book that has the ability to transport its wielder through space and time, the P. children finally begin to unravel the secret of their past, and begin to see the prophecy of their future.

When a book is touted as the next Harry Potter/His Dark Materials, it’s hardly ever a good thing. Those comparisons set a ridiculously high bar and projection of reader expectations, nigh impossible to reach. The Emerald Atlas, surely enough, falls short of The Golden Compass and The Sorcerer’s Stone, but it certainly is a damn good book and reminiscent of these two titles (and a few other YA/MG favorites) to boot. Of course, the tropes are abundantly familiar: there’s the ever-present orphaned children storyline, who are charged with saving the world and fulfilling a great prophecy against an ancient evil. Even the last name of the children, that “P.”, is evocative of a few famous magical orphan children, such as the aforementioned Harry Potter and the wardrobe traversing Pevensies of C.S. Lewis fame.[1. I don’t know what it is about the sibling orphan storyline, I never quite feel as connected to them as I do the lone orphan. The Enid Blyton books, the Boxcar Children…I just don’t know. In a throwdown between Harry and Edmund, Lucy, Peter and Susan, Harry wins hands down.] This familiarity is both the best and worst thing about The Emerald Atlas – the best, because these well-worn tropes are handled beautifully; the worst, because, well, it’s so familiar.

From a character perspective, familiarity also abounds. Some of Michael’s behavior is very similar to that of a Turkish Delight-loving Edmund, while the fiery young Emma smatters of an alitheometer-wielding Lyra. Kate, as the eldest of the P. children is the main protagonist of The Emerald Atlas, and it is her character – in her Potter-esque burden of having to protect others at great personal expense (in this case, her younger siblings), to safeguard the memory of their parents, and to foster her own special tie to the magical titled Emerald Atlas – that truly carries the novel. Mr. Stephens creates a believable voice for his children, managing to make each of the relatively young characters sound true to their ages, but also differentiates them splendidly, from Emma’s exuberance, to Michael’s more scholarly interests, to Kate’s burden of responsibility. As far as heroes go, the P. children make for a wonderful trio of protagonists, worthy of carrying their own saga.

Of course, what’s a magical series with an abundance of Mortal Peril without a truly memorable villain? In The Emerald Atlas we meet one powerful witch (whose selfish empty charm and stolen beauty is wonderfully wrought) but also are introduced to the greater villain – the Voldemort to the Countess’s Bellatrix, if you will. While we don’t see much of this mysterious evil mastermind, the glimpses we do see are tantalizing, and I cannot wait for more. Beyond the villains, there are also a host of Noble Characters that will Aid the Heroes on their journey (what is a quest/war against evil without good friends?) – the wise mentor, the warrior, even a host of noble dwarves that totally do Gimli proud.

The Emerald Atlas is something of an enigma. Given how very familiar the book in its entirety is, I don’t think I should have liked it so much….but I did. The story is so damn enjoyable that it’s easy to overlook the well-trod, well-worn territory. I loved the time traveling/magical book aspect of the novel, and of course the Mortal Peril that faces not only the children, but also the universe, should the magical tome fall into the wrong hands. Although predictable, I think there’s a lot of room for growth with this series – as the children get older, I can only hope that the voice and content matures, too. I’m certainly excited to stick around to see how the Books of Beginning turn out.

The girl was shaken awake. Her mother was leaning over her.

“There isn’t time to explain. Promise me you’ll look after them.”

It was Christmas Eve. Snow had been falling all day. As the oldest, Kate had been allowed to stay up later than her brother and sister. That meant that long after the voices of the carolers had faded away, she’d sat with her parents beside the fire, sipping hot chocolate as they exchanged presents—the children would receive theirs in the morning—and feeling very adult for her four years. Her mother gave her father a small, thick book, very worn and old, that seemed to please him greatly, and he in turn gave her a locket on a gold chain. Inside the locket was a tiny picture of the children—Kate, two-year-old Michael, and baby Emma. Then, finally, it was up to bed, and Kate lay there in the darkness, warm and happy under her blankets, wondering how she would ever fall asleep, and it seemed the very next moment she was being shaken awake.

The door to her room was open and, in the light from the hall, she watched as her mother reached back and unclasped the locket and chain. She bent forward and slid her hands underneath Kate, fastening it around her neck. The girl felt the soft brush of her mother’s hair, smelled the gingerbread she’d been cooking that afternoon, and then something wet struck her cheek and she realized her mother was crying.

“Remember your father and I love you very much. And we will all be together again. I promise.”

The girl’s heart was hammering in her chest, and she had opened her mouth to ask what was happening when a man appeared in the doorway. The light was behind him so Kate couldn’t see his face, but he was tall and thin and wearing a long overcoat and what looked like a very rumpled hat.

You can read the full excerpt online HERE.[2. Isn’t this SO Harry Potter? Very Lily protecting her baby, and Hagrid sweeping in to the rescue, etc, etc?]

Additional Thoughts: Want more about The Emerald Atlas, you say? Why, go forth and check out the official website HERE – where you can meet the P. children and check out other cool extras, like this book trailer:

Reading Next: I Don’t Want to Kill You by Dan Wells

Joint Review: The Best of All Possible Worlds by Karen Lord