Hello everybody and happy Thursday!

Today we are delighted to reveal the cover for MariNaomi’s YA debut Losing the Girl , out on May 1 2018 from Lerner Publishing. 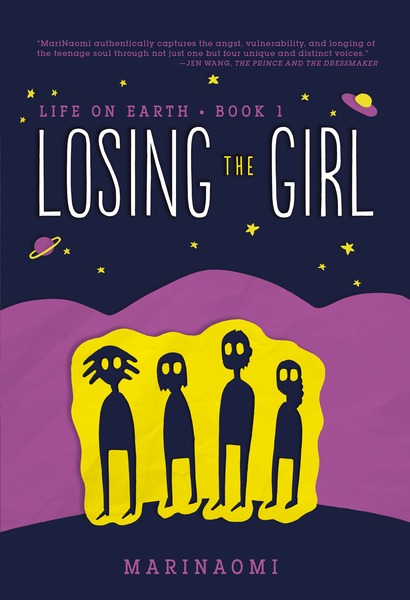 Claudia Jones is missing. Her classmates are thinking the worst . . . or at least the weirdest. It couldn’t be an alien abduction, right?

None of Claudia’s classmates at Blithedale High know why she vanished—and they’re dealing with their own issues. Emily’s trying to handle a life-changing surprise. Paula’s hoping to step out of Emily’s shadow. Nigel just wants to meet a girl who will laugh at his jokes. And Brett hardly lets himself get close to anybody.

In Losing the Girl, the first book in the Life on Earth trilogy, Eisner-nominated cartoonist MariNaomi looks at life through the eyes of four suburban teenagers: early romance, fraying friendships, and the traces of a mysterious—maybe otherworldly—disappearance. Different chapters focus on different characters, each with a unique visual approach.

Lots of people assume that because I can draw, I’m good at graphic design. That is completely untrue! I’m a storyteller first (in that storytelling is what comes more naturally to me) and a visual artist second (although I love making art, this is the part I find somewhat difficult). So when we (Lerner’s graphic design team and I) started talking about what the cover might look like—a single image that is meant to encapsulate what took me more than two hundred pages to relate—I was stumped. Luckily, I had professionals on the job.

Over a series of emails, I brainstormed with Lindsey Owens and Danielle Carnito, who had some good ideas, which I then brought to life. It was like having an illustration gig, but the ultimate client was me! I also checked in with my agent, Gordon Warnock, who had a huge role in the making of this book, and my editor Greg Hunter, who obviously did as well. With everyone weighing in, it felt very democratic, and assured me that our collective decision would be the right one. That’s one of my favorite things about traditional publishing versus self-publishing—with everyone weighing in, you become a team, the book’s family if you will.

This cover isn’t something I would have come up with on my own. My book family made it, and did a much better job than I could ever have. Good luck out there, little book!

MariNaomi is the award-winning author and illustrator of four comic memoirs including Dragon’s Breath and Turning Japanese. Losing the Girl is her first graphic novel and her first foray into fiction that (possibly) involves alien life forms. She’s also the creator of the Cartoonists of Color database. She lives in California with her husband and many cats and dogs. Visit her website at marinaomi.com.

We are giving away one copy of the book, courtesy of Lerner Publishing, open to addresses in the US. Use the form below to enter and good luck!

Today, we are being interviewed by….