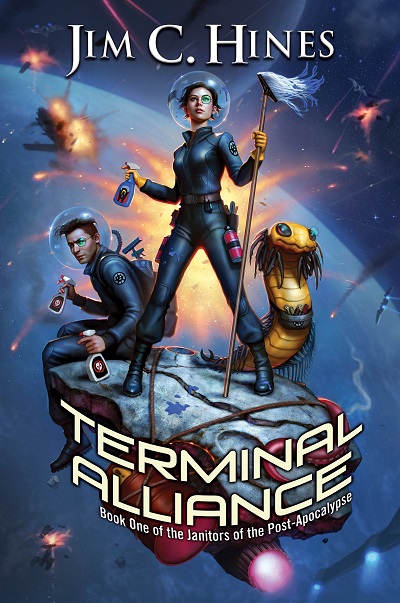 When the Krakau came to Earth, they planned to invite humanity into a growing alliance of sentient species.

This would have worked out better for all involved if they hadn’t arrived after a mutated plague wiped out half the planet, turned the rest into shambling, near-unstoppable animals, and basically destroyed human civilization. You know—your standard apocalypse.

The Krakau’s first impulse was to turn their ships around and go home. After all, it’s hard to establish diplomatic relations with mindless savages who eat your diplomats.

Their second impulse was to try to fix us.

A century later, human beings might not be what they once were, but at least they’re no longer trying to eat everyone. Mostly.

Marion “Mops” Adamopoulos is surprisingly bright (for a human). As a Lieutenant on the Earth Mercenary Corps Ship Pufferfish, she’s in charge of the Shipboard Hygiene and Sanitation team. When a bioweapon attack by an alien race wipes out the Krakau command crew and reverts the rest of the humans to their feral state, only Mops and her team are left with their minds intact.

Escaping the attacking aliens—not to mention her shambling crewmates—is only the beginning. Sure, Mops and her assortment of space janitors and plumbers can clean the ship, but flying the damn thing is another matter. As they struggle to keep the Pufferfish functioning and find a cure for their crew, they stumble onto a conspiracy that could threaten the entire alliance.

Stand alone or series: Janitors of the Post-Apocalypse #1

I needed something light, funny and fun after The Stone Sky put my heart through the wringer. Terminal Alliance, the new novel by Jim C. Hines and his first foray into Science Fiction was just the thing. Terminal Alliance is an action-driven novel of survival, featuring aliens, conspiracies, humans being humans and a crew of space janitors saving the day.

About a century before our story started, the alien Krakau showed up on Earth to invite humans to join their galactic alliance of Top!Best! species in the universe. BUT they were too late. Humans – as we are inclined to do, everybody knows this – had already destroyed themselves through a plague that killed must of humanity. The ones who survived are nothing but beasts, feral remnants.

But the Krakau, this super nice and benevolent race took pity on humans and found a cure to try and fix us. And they managed to do so – there are now a whopping 10,000 non-feral humans who work under the Krakau for the Alliance as soldiers, mercs and maintenance crew.

Humans being unpredictable and all, can survive pretty much anything. Each saved human is given a fresh new life and the amazing Krakau have concocted a Human language, a new feeding system (we don’t really need to eat with our mouths, do we?) and even put together handy historical dossiers to teach us to be human.

What could possibly go wrong.

Enter the Pufferfish, a battle spaceship where Marion “Mops” Adamopoulos is the head of the Shipboard Hygiene and Sanitation team. One day, Mops and her ragtag team of janitors are minding their own business when what looks like a bioweapon attack wipes out the entire Krakau command and turns all of the onboard humans into ferals. Well, all humans but Mops and her crew who had all been wearing suits at the time doing some maintenance work.

Mops, now the most senior officer on board is given the keys to command (so to speak) and she needs to:

*not necessarily in this order.

With lots of humour and plenty of action, this is a romp that was at turns hilarious and twisterific. I loved how Mops and Friends had to use their janitorial skills to get out of the most impossible situations, always thwarting their enemies. Using nothing but their smarts and with the help of Mops’ trusted AI Doc, the team manages to

I had great fun reading this and I loved Mops’ resourcefulness and determination to save her people and her crew – who were all awesome, I love found families so much and their team turned out to be just that, with quite a few funny interactions born out of ignorance of human history.

I can’t wait to see where else Jim Hines will take them. To infinity and beyond, I am guessing.

And the Award Goes to…