Today we are delighted to host Sarah Kuhn to talk about the experience of writing Heroine Worship, the sequel to the amazingly fun Heroine Complex. 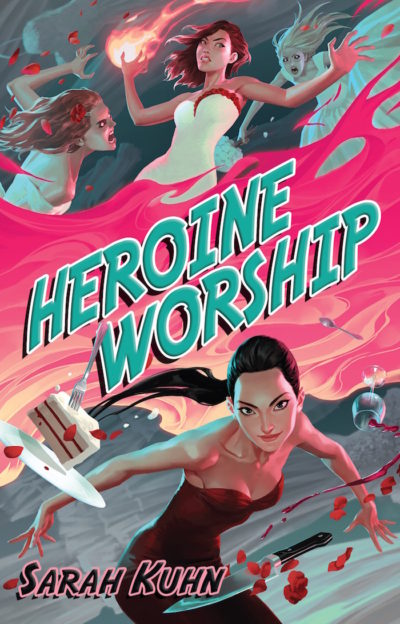 When I started writing Heroine Complex—the first book in my series about Asian American superheroines fighting evil, negotiating complicated friendships, and falling in love with various cute nerds—I had no idea there was going to be a sequel. I mean, honestly, I had no idea the book would be published, period, so getting to write a second one felt like some kind of magical second dessert. Like ice cream on top of ice cream.

Of course, once I started actually writing the second book, Heroine Worship, I found that every bit of excitement seemed to come paired with a matching fear. Yay, a chance to hang out with my favorite imaginary people again! But…what if I suddenly forget all their personalities and they don’t sound like the people I fell in love with? Yay, another story set in this demon-infested version of San Francisco! But…what if I can’t match the ridiculous heights of the evil cupcake battles in the first book? Yay, I’m being paid to write another book! But…what if I actually can’t write another book and the first time was just a fluke and now everyone’s going to find out that I’m not the totally for real novelist I claim to be? Hashtag imposter syndrome.

I’d like to say I conquered these fears in some triumphant bout of literary superheroism, but the truth is I had to work through and fight back against them every day. And one of the biggest excitement/fear combos I experienced came from a major element of Heroine Worship—the switch in protagonists. Book 1 was all about Evie Tanaka, the put-upon personal assistant to a diva superheroine. Book 2 is about that diva superheroine—Aveda Jupiter, aka Annie Chang.

Aveda/Annie is something of an antagonist to Evie in Book 1—demanding, dramatic, and prone to fits of diva-rage that sometimes lead to diva-tantrums. They’re also childhood best friends and their bond has turned toxic and co-dependent over the years. I knew that this was never going to be a story about a girl who needs to get rid of her bad friend; rather, I wanted it to be a story about two flawed, painfully real girls who have fucked up in different ways and need to work on their bond to make it stronger and healthier and more honest. And that ultimately, they understand each other better than anyone else.

I figured out somewhere in the messy first draft of Heroine Complex that if there was ever going to be a sequel, I wanted it to be from Aveda’s perspective. The thought of writing from her POV, in her voice, really excited me—particularly since I knew the events of Heroine Complex were going to leave her in an interesting place, where she has to work through a bunch of stuff she thought she had all figured out. (Spoiler alert: she doesn’t.)

But as with the other feelings of excitement I had about writing a sequel, this one also came with its own custom-made matching fear. Because thanks to Aveda’s role as a semi-antagonist in Book 1, I knew readers would go into Book 2 with varying levels of side-eye toward her. That some would go in outright hating her. That she—and I—would need to work extra hard to get them to go on this journey with her and feel for her as deeply as I do.

In my first draft of Heroine Worship, I kept trying to deal with this by having Aveda overexplain every single feeling she was having, by making her internally monologue at great length on how bad she felt about everything that happened in Book 1. Smart beta readers pointed out that this isn’t really who Aveda is—yes, she feels bad about being a not great friend to Evie and yes, she’s reevaluating her life, but she is also, above all, a Proactive (and Sometimes Aggressive) Do-er of Things rather than a Passive and Incessant Internal Monologue-er of Things. And starting her in a place of complete, over-explain-y self-awareness didn’t really give her anywhere to go.

I had to dig back in and just…let Aveda be Aveda. Let her be as messy and flawed as I’d imagined her. Let her make mistakes and learn from them. In short, I had to stop being an overprotective parent to the protagonist child I’d come to love so much and let her breathe. Once I did that, writing her came more easily, was a more joyful experience, and took us both on the journey we were meant to go on. I connected so much with her quest for perfection, her crushing self-doubt, and her strong desire to punch annoying shit. I was at one with her voice. The fear I had didn’t go away entirely, but the excitement became the dominant force—like the fear sort of got eaten by the excitement amoeba and they became a big blob of mostly positive sequel-writing feelings.

I’m now writing the third Heroine book and I’m back in that place of the excitement/fear conundrum. But I’m trying to remember what I learned writing the sequel—that I need to let characters be who they want to be, and that they will never be perfectly self-actualized and self-aware when they start their stories. And that ultimately, letting the excitement amoeba take over means I can truly enjoy the ice cream on top of ice cream. 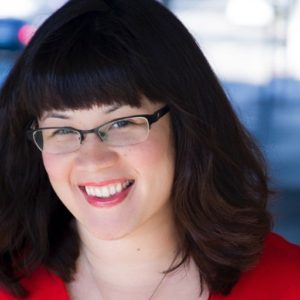 Sarah Kuhn is the author of Heroine Complex—the first in a series of novels starring Asian American superheroines—for DAW Books. Heroine Complex is a Locus bestseller, an RT Reviewers’ Choice Award nominee, and one of the Barnes & Noble Sci-Fi & Fantasy Blog’s Best Books of 2016. The sequel, Heroine Worship, is out now. Sarah also wrote “The Ruby Equation” for the Eisner-nominated comics anthology Fresh Romance and the romantic comedy novella One Con Glory, which earned praise from io9 and USA Today and is in development as a feature film. Current projects include a series of Barbie comics and a comic book continuation of the cult classic movie Clueless. Her writing has appeared in The Toast, The Mary Sue, Uncanny Magazine, AngryAsianMan.com, IGN.com, Back Stage, The Hollywood Reporter, StarTrek.com, and the Hugo-nominated anthology Chicks Dig Comics. You can visit her at heroinecomplex.com or on Twitter: @sarahkuhn

We have one copy of Heroine Worship to give away. Giveaway is open to US addresses only – please use the form below to enter. Good luck!