Too Like the Lightning: Ada Palmer on Terra Ignota – Why as a Historian I Prefer to Write Science Fiction and Fantasy

We kick-off the week with a guest post by Ada Palmer, the author of upcoming Science Fiction novel Too Like the Lightning.

Terra Ignota: Why as a Historian I Prefer to Write Science Fiction and Fantasy

People often seem surprised that I choose to write science fiction and fantasy—I think they expect a history professor to write historical fiction, or literary fiction, associating academia with the kinds of novels that academic lit critics prefer. But I feel that speculative fiction, especially science fiction and fantasy, is a lot more like the pre-modern literature I spend most of my time studying than most modern literature is. Ursula Le Guin has described speculative fiction authors as “realists of a larger reality” because we imagine other ways of being, alternatives to how people live now, different worlds, and raise questions about hope and change and possibilities that different worlds contain. In contrast, a lot of modern writing, particularly “realist” and literary fiction, concentrates very narrowly on the here and now, the modern or postmodern, and especially the immediate audience, readers of this year, this decade, this intellectual moment. That kind of literature, literature of the immediate, is possible because of the speed with which works are published now, industrial printing offering an immediate audience, and feeding genres optimized to enter conversations about the hot concerns of here and now. Even magical realism—the arena of mainstream lit where speculative fiction elements are welcome—is characterized by characters’ mindsets, worlds and problems never changing. If a ghost or spirit appears, it leads the character to a real-world-centered endpoint, coping with a parent’s death or moving on from lost love, it doesn’t make the characters dedicate themselves to studying the new phenomenon, and changing the world with what they’ve learned. All the characters’ minds and challenges remain bound within this world, this set of expectations and anxieties, this slice of history.

But I spend most of my time reading works from the manuscript period or the early days of print, when making just one copy of a book took months, and even a printed book had a long and hazardous road to travel between the press and a distant reader. In that period, the community of readers authors were part of included some friends and contemporaries, but also many people remote from the author in time: posterity who would not receive the book until the world had already changed, and the earlier authors that later books responded to, whose creators had poured years of their lives into writing for unknown future readers, in the faith that someone someday would respond and pass the conversation forward. Some literature from the pre-modern world addressed immediate concerns—propaganda, sermons, news-sheets—but bigger literary projects tended not to assume that readers would share the same immediate worldview or experience, only that readers would share the same big questions.

Writing for a more distant audience, authors tended to be speculative, using exotic perspectives, fantastic creatures, imaginary lands, allegories, prophecies, stories within stories, techniques which, like science fiction and fantasy, use alternatives rather than one reality in order to ask questions, not about the way things are, but about plural ways things have been and could be. Such works have an empathy across time, expecting and welcoming an audience as alien as the other worlds that they describe. When I read Voltaire responding to Francis Bacon, responding to Petrarch, responding to Boethius, responding to Seneca, responding to Plutarch, I want to respond to them too, to pass it on. So it makes sense to me to answer in the genre people have been using for this conversation since antiquity: speculation. It’s the genre of many worlds, the many worlds that Earth has been, and will be.

My own series, Terra Ignota (which begins with Too Like the Lightning, out from Tor May 10th, and Seven Surrenders coming from Tor in December) is most immediately a response to the Enlightenment, to the philosophical novels of Diderot and Voltaire. Their works excite me because they write with such intimate, personal voices, addressing the “dear reader” directly and sharing, not only their stories, but their opinions, speculations, hopes for the future, even fears and anxieties, apologizing to the reader when they feel they haven’t done enough.

Reading their works is like opening a time-capsule and feeling the inside of an eighteenth-century mind, an experience much more alien in its way the beings Star Trek ships run into. I wanted to recreate that effect, but for the future, not only telling a story of the 2400s but having a narrator from the 2400s express the opinions and sentiments of an alien time, alien to us just as Voltaire and Diderot are alien to us.

For example, for Voltaire separation of Church and State was new and totally hypothetical, so his discussions of this topic are speculative and utopian; for us separation of Church and State is a familiar idea that has been tried in several different forms, so our questions tend to be about these realities and their successes and failures; but what if a narrator as opinionated as Voltaire addressed Church and State another 400 years in the future? My narrator gives us a time capsule of a mindset of the future, showing not only the world and people but the assumptions of a future thinker, some progressive, some closed-minded, some familiar, some bizarre. If my narrator asks the reader whether we believe that an event is governed by Chance or Providence, the very fact that he would ask that question tells us so much about the future he comes from. And if a narrator in the 2450s is choosing to try to write like an author of the 1700s that tells us a lot about how his future thinks of the past. After all, the Renaissance criticized the Middle Ages and celebrated classical antiquity, and tried to write its histories in a classical style, so why shouldn’t future ages divide up history differently as well, preferring 1750 to 1950 and trying to write its histories like the Enlightenment?

As for the book’s setting, it’s very classic science fiction, almost golden age, with flying cars, glittering future cities, and field trips to the Moon, precisely the kind of optimistic, “World of Tomorrow” kind of future that we rarely write about anymore.

But I think—in the midst of so much dark, dystopian or apocalyptic fiction—that we have a lot of new questions to ask of classic positive futures. Something like Alfred Bester’s The Stars My Destination is a wonderful setting, full of energy, drama, the momentum of humanity’s space-faring future, and explores the effects of a transportation revolution on exciting criminals and the glittering elite. I wanted to explore that kind of future but with the sort of deep, thick world building that Gene Wolfe uses in The Book of the New Sun. Gene Wolfe’s worlds have an amazing sense of thickness, full of history, culture, ruins, past events, poetic traditions, fabrics, currencies, regional customs, not one homogenous world with one set of values but many peoples, like reality, and also like real histories, which are always full of lush details. Thick world building like that lets you ask so many new questions of a classic future, keeping the manic energy but gaining depth and texture. Add on some political drama in the style of I Claudius, lush descriptions emulating Fagles’ translations of Homer, some mystery modeled on the more experimental narrative structures Doyle uses in the later Sherlock Holmes, and my intimate, Enlightenment-style narrator, and I hope with Terra Ignota that I’ve produced something refreshingly different, optimistic but serious, classic but new, and alien by using the richest source of alien ideas and mindsets that we know of: Earth. 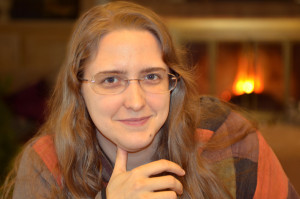 Ada Palmer is a professor in the history department of the University of Chicago, specializing in Renaissance history and the history of ideas. Her first nonfiction book, Reading Lucretius in the Renaissance, was published in 2014 by Harvard University Press. She is also a composer of folk and Renaissance-tinged a capella music, most of which she performs with the group Sassafrass. Her personal site is at adapalmer.com, and she writes about history for a popular audience at exurbe.com and about SF and fantasy-related matters at Tor.com.