Move over Percy Jackson–Apollo is in the house. 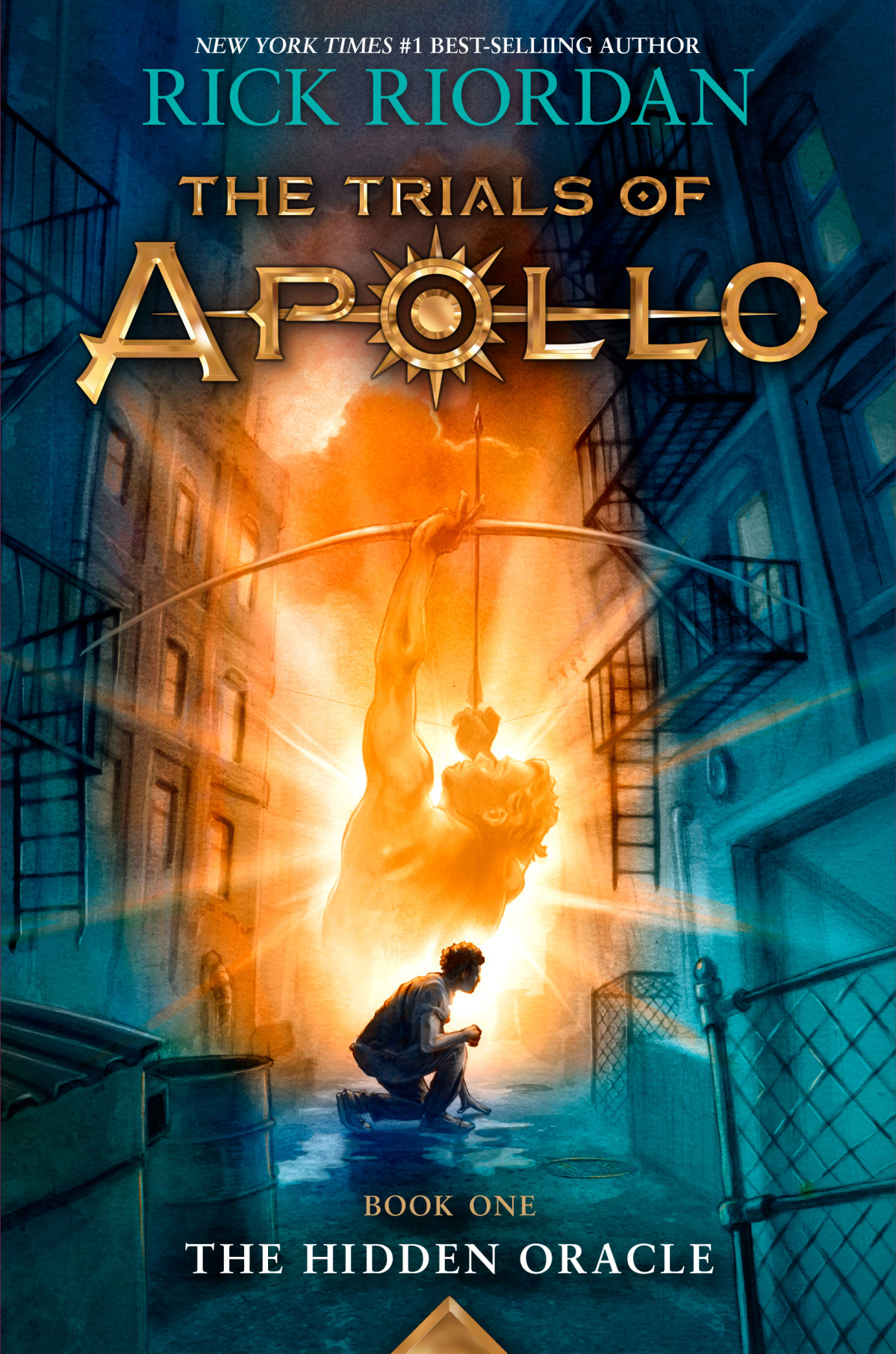 How do you punish an immortal?

By making him human.

After angering his father Zeus, the god Apollo is cast down from Olympus. Weak and disorientated, he lands in New York City as a regular teenage boy. Now, without his godly powers, the four-thousand-year-old deity must learn to survive in the modern world until he can somehow find a way to regain Zeus’s favour.

But Apollo has many enemies – gods, monsters and mortals who would love to see the former Olympian permanently destroyed. Apollo needs help, and he can think of only one place to go . . . an enclave of modern demigods known as Camp Half-Blood.

Stand alone or series: Book 1 in the Trials of Apollo series

You know who he is. God of the sun, complete with sweet chariot, and twin to Artemis. Also the god of music and poetry, archery, healing, plague, and–most importantly in this particular book–prophecy.

In the world of Percy Jackson, Greek gods and demigods, Apollo has dropped in from time to time, occasionally to help Percy and company (including Apollo’s own progeny), but mostly he’s been consumed with fickle pursuits–new cars, new songs, various artists who catch his eye, that sort of thing.

Everything changes, though, when Zeus decides to punish his son for the gods’ recently concluded war with Gaea, and banishes Apollo to roam Earth as a mortal. Not just any mortal, mind you–but an average teenage boy named Lester Papadopoulos. Worse, Apollo wakes up in a dumpster, attacked by two teenage thugs, saved by a strange young girl demigod named Meg, and thus finds himself bound to serve her until such a point that Zeus forgives him. (This isn’t Apollo’s first stint as a mortal, either–in his four-thousand-plus year lifespan, he’s been kicked outta Olympus by his father two other times. So he knows the drill.) At first, Apollo is petulant and self-absorbed, instead of repentant–after all, he is a god of Olympus reduced to a mere mortal AND beholden to a street urchin child whose godly abilities seem to be primarily focused on fighting with rotted produce from the dumpster. Apollo’s own powers are severely stunted; he can hardly remember any of the stuff he knew as a god (his mortal brain can’t really handle four millennia of information) and his healing and archery abilities are no longer divine. Suffice it to say, he’s not a happy camper.

Soon, however, Apollo and his new charge Meg learn that there’s a much greater and more sinister plot afoot. Apollo’s oracles have been blocked–most distressingly the oracle at Delphi-Camp-Half-Blood has been completely shut off from Rachel Dare (a mortal seer and friend to Percy Jackson), and no prophecies have been made to send the demigods on their regular quests.

Demigods are starting to disappear, lured away from the camp into the woods surrounding the supposedly protected haven for the gods’ children.

There are dark forces–ancient forces–amassing, ready to challenge the gods, demigods, and destroy civilization as we know it.

This time around, there isn’t a demigod to handle Olympus’s dirty work. It is up to Apollo to save his friends, his children, and himself from calamity.

The Hidden Oracle is the first book in The Trials of Apollo series: a brand new arc of stories set in the same world as Percy Jackson and the Olympians, this time following the fallen-from-grace god Apollo. When I first learned of this spinoff series, I was both intrigued and skeptical. Intrigued, because Ana and I just recently finished reading the original Percy Jackson books (which I loved devouring a second time around), and the conceit of having an Olympian god as a narrator is a compelling hook. Skeptical, because said conceit involves Apollo–a god whose head we might not want to be in considering this is a book intended for a middle grade and young adult audience. Not that MG or YA readers can’t handle it, but because the entire draw of the Olympians series is that gods are portrayed as vengeful, petty, never-changing, terrifying, and unfathomable to mortals–even demigod offspring of these gods are frightened of and have a hard time understanding the motivations and ways of their fickle parents.

Having Apollo as a protagonist and first person narrator struck me as a particularly hard POV to pull off–but Rick Riordan not only pulls it off, he manages to do so with humor and gravitas. The Apollo of The Hidden Oracle is one who remembers what it was like to be divine, and fathoms his own powers and abilities, but has forgotten so much because he has been transposed into a teenage mortal body. He has lost a great deal of his abilities and powers as well as his memories–it’s a huge character builder for Apollo, who feels entitled (he’s a god after all) but who actually has very little power or agency (he’s bound to Meg and must obey her commands). I love this subversion of power, and the way that Apollo as a character on the whole is treated by this plot-setup–it makes him far more accessible as a character, and satisfies a lot of the ‘suspension of disbelief’ issues that arise when you have a god with unlimited power as a protagonist.

Of course, the most appealing thing about Apollo as narrator is that he’s hilarious (and he’s not Percy Jackson). This narrative is pithy and fun, and sprinkled with just the right touch of old school Greek and Roman references, with some more timely ones (like Britney Spears at the 2007 VMAs, or Woodstock, etc). He also grows and changes a lot as a character over the course of the story, evolving from a self-centered god in a human body to more of a sympathetic figure, friend, and (weirdly) father. It’s actually quite touching and effective, and I enjoyed the arc very, very much. (It’s a nice departure from the traditional reluctant hero arc because, if anything, Apollo is kind of an antihero.)

The other thing that The Hidden Oracle has going for it is its other protagonist–Meg. I don’t want to spoil much about her and her parentage, but this particular young demigod has been mistreated and bent to the will and whims of others, abandoned (predictably) by her godly parent, and my heart goes out to her. There are twists aplenty in this book, and I’m very eager to see what happens next with Meg and Apollo.

Beyond the character front, the writing is as engaging, fast-paced, and action-packed as ever. Some familiar faces make repeat performances in this new novel–including Percy and Rachel–which I was happy to see. Most of all, though, I was thrilled to discover that this book focuses on a new crop of characters and you don’t have to be well versed in older Olympian books to jump into the fray with this novel.

In other words: I highly enjoyed this book, and cannot wait for book 2.

Additional Thoughts: Make sure to check out our stop on the Trials of Apollo blog tour here and enter for a chance to win a copy of the book, courtesy of Disney-Hyperion.