Next Tuesday (March 22, 2016) we will publish Broken by Susan Jane Bigelow–the first novel in the Extrahuman Union series, a dystopian future science fiction novel with superheroes trying to survive under a totalitarian regime. Today, we are delighted to invite Susan as she tells us a little bit about the Inspirations & Influences behind the novel. 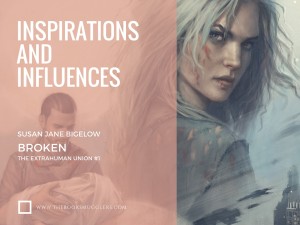 Please give a warm welcome to Susan Jane Bigelow, folks!

Broken started the way a lot of these things do: with a post on LiveJournal.

A long time ago I got involved in a comment thread about superhero names, and I came up with a few that I liked: Broken, Sky Ranger, and Crimson Cadet. From that, the germ of a story began to grow. How could I not want to write about super-powered people with these names?

And so I did. I entered NaNoWriMo that year and managed to produce a very rough draft of Broken.

I love superheroes, and I always have. I grew up watching the old Batman TV show and Superfriends; later I devoured the Batman animated series, Superman, Justice League, and the 1990s cartoon version of X-Men. Superheroes are a mess of questions, most of the time. Why did they take separate “hero” names, and where did those come from? How did they deal with feeling different? How do they relate to one another?

Superhero teams are something that especially fascinated me. How do all these incredibly powerful people get along? What could possibly bring them together? How might they break apart?

Broken’s Extrahuman Union is a deliberate echo of these old superhero teams. It’s sort of like a mandatory version of Xavier’s School for Gifted Youngsters that no one can ever leave!

Much as I loved traditional superhero stories like Batman and Peter David’s run on the Supergirl comic book, I started to seek out alternative ways of looking at them. The Authority, The Dark Knight Returns, Watchmen, and The Maxx are comics that looked at superheroes through a darker, stranger lens.

And so Broken herself is descended from Supergirl, Jenny Sparks, The Maxx, and even Alita from the manga Battle Angel Alita.

The rest of the world of Broken owes a lot to 90s science fiction TV like Babylon 5 and to all the fantastic space opera I’ve read, like Lois McMaster Bujold’s Miles Vorkosigan saga.

The book also owes a debt to George W. Bush. If he hadn’t beaten John Kerry in 2004, I wouldn’t have been grouchy enough to spend an entire month writing about super-powered people living under an emergent fascist regime. Thanks, George!

But maybe the biggest and weirdest influence on the book is a line from the Butthole Surfers song “Pepper,” which is all about teens who go courting death. It goes “Some will fall in love with life and drink it from a fountain / That is pouring like an avalanche, coming down the mountain.”

This story—this whole series—is about Broken falling in love with life. 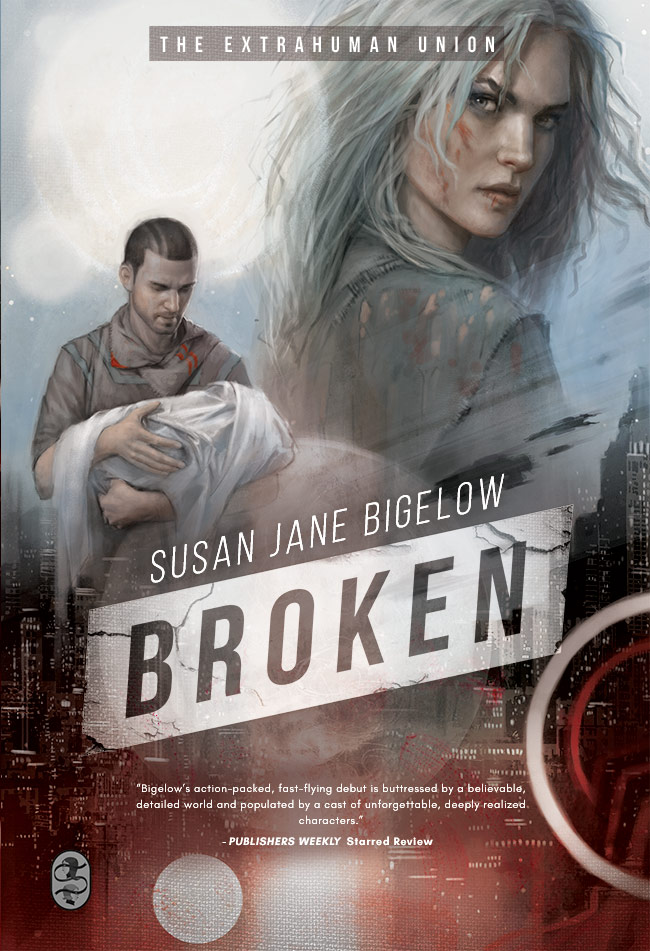 Broken will be published officially on March 22, 2016. You can buy the book in print now, or preorder the ebook (EPUB & MOBI) from all major retailers online. You can also buy the ebook directly from us on March 22. The print book contains the novel, two illustrations from Kirbi Fagan, and a sneak peek at Sky Ranger, the second book in the series (published this June). The ebook edition will also contain a prequel short story, “Crimson Cadet”, as well as an essay from the author and a Q&A with the artist.