Who: Renay, one of the co-editors of the excellent blog Lady Business, a Strange Horizons columnist, co-editor of Speculative Fiction 2014, and co-host (with Ana) of Fangirl Happy Hour.

As is now traditional, Renay is again our last Smugglivus Guest Blogger of the year!

In 2014, I co-reviewed Rosemary and Rue by Seanan McGuire with my co-editor, Jodie (beware spoilers, we Go Deep in co-reviews). Looking back on that discussion, I had no clue what I was getting into, what Seanan McGuire was going to make me want as a reader, and absolutely no idea that less than a year later I was going to do a deep dive into the October Daye series.

It started when my library only had four books out of the nine-book series. Once I started requesting them and my library kept ordering and handing them over to me, I couldn’t stop. On one hand, my library is awesome. On the other hand, now I’m going to be the person waiting for my personal copy on release day and shoving the whole book into my face within the first 24 hours. It’s that kind of series for me now. I am one of the Converted. 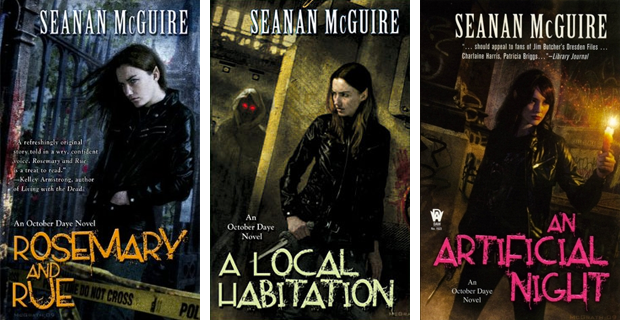 Urban Fantasy isn’t a genre I read very often and stories about faeries and faerie court politics even less so. But something about the October Daye series allowed me to get beyond the premise and the world building and to the core of the work, which is very character-focused and places emphasis on interpersonal relationships in a way that really appeals to me. The political shenanigans and mysteries can be a good time, watching Toby brute force her way through them even more so, but what kept me coming back to the series were Toby’s relationships.

The series begins with Toby alone, isolated, and without a core community or family. Nine books in, this has drastically changed, and the way it does so is some of the best character development and interpersonal drama I’ve ever had the pleasure to read. People (and faeries) are complicated and contradictory and impatient and sometimes cruel. But people (and faeries) also have infinite capacity for love and compassion and understanding. Some of the most gut-wrenching emotional moments in the series aren’t big reveals or story climaxes, but instead quiet moments between individual characters when feelings and the future of the relationship is on the line. And, because this series is the series it is, it’s full of the flaws of humanity, it doesn’t always go the way we as readers want it to go. It feels very nuanced and cratered. It feels true to a life lived — happiness found, lost, but eventually rediscovered — as we watch Toby navigate the world she inhabits as a half-human, half-faerie changeling. 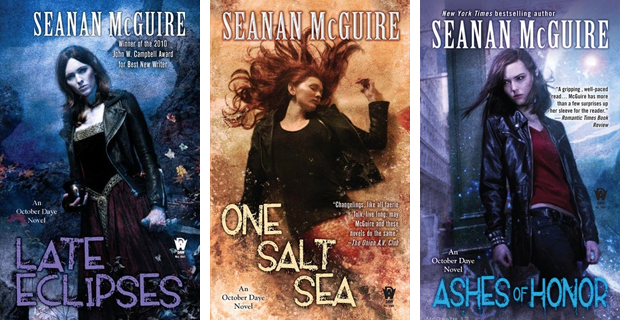 It’s hard to talk about a series that’s already very long and convince people to read it without spoiling everything after the second and third books. Although Rosemary and Rue is a good first novel and a great introduction to the world, the way the series grows and changes make that first book a little unrecognizable looking back. This series is change on both a personal and grand scale: the characters live and grow and aren’t the same people in one book that they are in the next and it all feels natural. The world changes, too. This series captures life and how messy and inconvenient and wonderful it can be. It just adds a little magic and faerie court politics to make it interesting.

The series also does something I have missed seeing in a lot of media I read and watch. The men are emotionally expressive with the women in their lives as well as other men, which feels so real and vivid to me because I grew up in groups where men were casually intimate with the people around them who they were close to. This is often missing from a lot of original media that I experience, whether due to the kind of story it is or Obligatory Heteronormativity with a side of Toxic Masculinity. But there are so many moments in the series that I know in other narratives we simply wouldn’t see between men and boys (both with each other and women). There’s also the absence of the looming specter of sexual violence. I can’t argue that this series isn’t violent — if they did a TV series the main expense would be vats of fake blood — but it’s not violent in a very particular way. To someone who reads in genres that put women in sexual peril as window dressing, you get fantastic at sussing out the clues and hints that it’s coming. But it never happens here and it makes the reading experience flat out amazing. 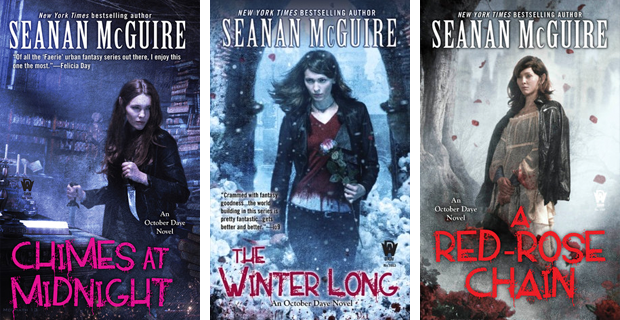 And I could go on forever and ever about the friendships between Toby and the women she surrounds herself with, because I find these relationships so wonderful to read about and reflective of the relationships I have with the women around me, too. I never expected to go into an urban fantasy series about faeries and come out so invested in reading about solid, supportive friendships. Because, honestly, there’s not much drama to be had there. But for me that’s sort of the point: Toby’s relationships, as they develop, anchor and enrich her life in ways that don’t have to be dramatic to be rewarding and entertaining. It’s wonderful to watch friendship be allowed to simply exist.

I spent a good chunk of my 2015 reading and loving the October Daye series. If you haven’t yet taken the plunge and are looking for a good series to sink your teeth into, this one is a great choice. There’s still several books to come so you’ll get to join the ride to the very end with the rest of us, too.