Book Review: A History of Glitter and Blood by Hannah Moskowitz

I don’t know that I ever read anything quite like A History of Glitter and Blood, a novel so edgy and dramatic and dark and uneasy and different and so, so weird, it almost exists on a realm of its own. It is SO bloody good it makes me want to fall on my knees and weep. Dramatically. 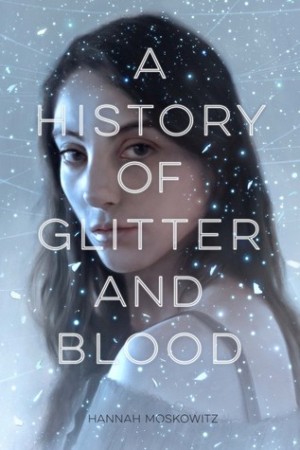 Title: A History of Glitter and Blood

Sixteen-year-old Beckan and her friends are the only fairies brave enough to stay in Ferrum when war breaks out. Now there is tension between the immortal fairies, the subterranean gnomes, and the mysterious tightropers who arrived to liberate the fairies.

But when Beckan’s clan is forced to venture into the gnome underworld to survive, they find themselves tentatively forming unlikely friendships and making sacrifices they couldn’t have imagined. As danger mounts, Beckan finds herself caught between her loyalty to her friends, her desire for peace, and a love she never expected.

This stunning, lyrical fantasy is a powerful exploration of what makes a family, what justifies a war, and what it means to truly love.

Why did I read this book: Hannah Moskowitz is one of those authors I hear great things about but never got around to actually reading one of her books. I had an ARC of this one laying around and one day, I decided to start reading it. I was a goner from page 1.

I don’t know that I ever read anything quite like A History of Glitter and Blood, a novel so edgy and dramatic and dark and uneasy and different and so, so weird, it almost exists on a realm of its own. It is SO bloody good it makes me want to fall on my knees and weep. Dramatically.

Once upon a time, in the fairy town of Ferrum, there were only four whole, not maimed, fairies: Beckan and her three best friends Scrap, Josha and Cricket. The fairies share the town – the greatest, oldest fairy town that ever was – with the gnomes, who live underground (because that’s what gnomes like, right?) and provide services to the fairies like driving their buses and sweeping the streets. The gnomes are carnivores and if they occasionally devour parts of fairies (hence most fairies, apart from those four up there, have parts of them missing), it is like a tax the fairies pay to keep their town running. They are not too bothered because it’s not like fairies can really die, being immortal and all, capable of living on and on even without limbs and other important parts of their bodies, even as they shed the glitter that covers their bodies and when they can feel the pieces they leave behind.

Take Beckan for example, whose father lives in a bottle, and all that it’s left of him is an ear and a nose: 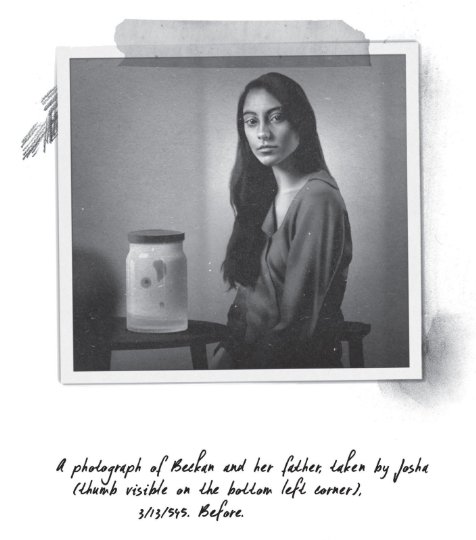 Then the war comes. The tightropers – creatures who spit ropes from their mouths and fly in the skies – come to liberate the fairies from oppression.

The fairies did not know they needed liberating.

Although if you look closely, and listen carefully, it is possible that “liberation” really means “occupation”.

But because fairy history (is there a fairy history?) proves that never really stay put and they all leave. Apart from the four aforementioned unharmed fairies who stay behind because it’s their town and some fairies should prove history (?) wrong.

And then there is a ceasefire. And there are only two fairies left unharmed now. And one dead gnome king (pay attention, this is important because FORESHADOWING).

Or maybe not really.

Going back and forth, alternating third person present tense (for the now) and third person past tense (for the then, building up to the now), A History of Glitter and Blood follows Beckan and her pack, the found family she forms with her best friends (she used to love Josha but Josha loves Cricket; she might have feelings for Scrap? But Scrap did something Really Bad and now things are so complicated). Three of them had to resort to turn tricks for the gnomes and become prostitutes in order not to starve (it is possible that two of them were already doing that before the war even started). It is a job that brings money and food. It is dangerous. It is not exactly easy for some of them and it’s a bit messed up because of the thrill of having sex with someone who can just eat you and therefore holds power over you. The narrative is completely nonchalant about the way it describes this but the holes that show the complex emotions involving it, are there for anyone to see.

And then eventually, that family expands to include two gnomes (who might or might not eat pieces of Beckan if they get really, really hungry. It is possible that the war is not really over) and one tightroper boy named Piccolo. They all find each other and navigate toward one another because in times of war, everything goes, even siding with the enemy. Even finding things in common with races you think are beneath you.

This is the thing you see: beneath all the weirdness of its premise and the complicated narrative mode, A History of Glitter and Blood is a super smart book that explores themes such as racism and prejudice. That subverts and examines issues of gender. For example, none of the female fairies can have children so all fairies are essentially biracial but they never, ever talk about their parts that are not fairies. A fairy is always a fairy. It’s the most important part of their blood.

The female fairies are sometimes called “empty”. This really hurts Beckan even if she doesn’t want to have her own children.

Most characters are bisexual.

They have sex for fun, for the mere physical aspect of it, for money, for love.

The first clue is in the title itself, “A History.”

Interspersed throughout the narrative are asides about writing. Asides that break the fourth wall:

“Once upon a time there was a writer who couldn’t write a fucking book.
I don’t know what comes next. That whole chapter’s going to need to get thrown out anyway. You completely forgot halfway through that you’d said it was raining at the beginning.
Was it raining?
No one’s ever going to know and it’s all your fault.
Put a fucking map in the next draft.
Chapter two.”

If you pay close attention, it is clear from the start who is narrating the story.

And yes, this is “a history” about the war. It is also “a history” about how people survive and how they deal with survivor’s guilt, abuse, rape, isolation, racism. It’s clearly a story about dealing with tragedy.

Because of who is writing and why, and it’s really also about framing the narrative: how do you tell a story depends on who you are and what’s your motivation. Especially if you are writing history.

Or when you are writing a love story.

One way to describe this book is: four incredibly stupid, irresponsible, naive teenagers rashly decide they can survive a war unscathed by staying behind after everybody else leaves and prostituting themselves to the enemy. What a bunch of fucking idiots.

Another way to describe this book is: four amazing, incredibly earnest, idealistic teenagers courageously decide they can survive a war unscathed by staying behind and trying to save the city they love. They form a pack, they love one another grandiosely and they fight to live their lives to the fullest. What a bunch of lovable fools.

I prefer the latter description. These kids live in my heart.

Rating: 9 – Damn near perfect and a strong contender for a top 10 spot.