Check out S.E. Grove’s post, in which the ideas behind the Mapmakers series are explored.

Earlier this year, I reviewed The Glass Sentence by S.E. Grove and loved the book for its unique premise. The second book is now out and the author is here to talk about the worldbuilding. 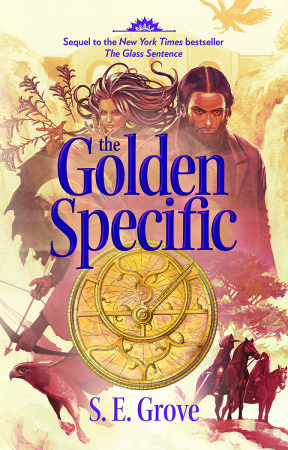 Please give a warm welcome to S.E. Grove!

Thank you for the invitation to talk about world-building! For these books (and for me in general), the world-building is built on historical research and historical speculation. I’m convinced that historical work (even the most earnest academic kind) involves both, but in fiction we get to speculate in different ways.

The idea for “Mapmakers” emerged from the frustrated desire to really experience the past. We can’t! It’s impossible! I love the idea of time machines, but they always break down! The Great Disruption, which throws different parts of the world into different time periods, allowed me to have my cake and eat it to – I could venture into different time periods, but I didn’t have to worry about the technological limitations.

In our present day, we tend to focus a great deal on technology, but in creating the time/places of the Great Disruption, I was actually more interested in culture. One of the fantasy/sci-fi writers I most admire is Ursula LeGuin, and I especially like how she focuses on the sociocultural realities of each place she creates. In writing the Mapmakers books, I was trying to focus on precisely these aspects. I decided to anchor the events of the books roughly ninety years after the Disruption so that the focus would not be on the event itself but on the ways each “Age” developed over several decades in the wake of the event. What values does each Age have? How does it deal with racial/temporal difference? What are its core principles as a nation, and how is it ruled? These questions and others pushed me toward both invention and research.

Here’s an example: the Disruption threw Europe into the medieval and early modern eras. As a result, the newly created United States no longer had to reckon with the range of colonial powers (England, France, Spain, and so on) that in 1799 still had significant claims upon the western hemisphere. With those powers gone, would slaveholding survive? I imagined the revolt in Haiti (which really did occur just before 1800) setting off a chain of similar revolts in the slaveholding south. Without the colonial powers to support the slave trade (and provide markets), slaveholding would be far less sustainable.

Ok – so much for the big picture. Now, what would such a revolt look like? Who would revolt? How would the newly created United States respond? I imagined a war that ended in heavy compromise, since the young U.S. would not be in a position (after the Great Disruption) to lead a lengthy war for a victory of questionable worth. A new state, New Akan, would be created in the south, a much earlier process of integration occurs over the course of the nineteenth century. Both Sophia (on her father’s side) and Miles are descendants of people from New Akan.

I must add a third element to the historical research and historical speculation, and that’s pure fantasy! The Lachrima are a good example. They are inspired largely by a Mesoamerican folk tale about “La Llorona,” a woman who weeps for her lost children and lures innocents to an early grave, and so there’s both history and fantasy (and maybe a little horror?!) in their origin. My hope is that these books result in something similar for readers – some history, some fantasy, and just a dash of shuddering creepiness!

I am a historian and an aspiring explorer! Having grown up in Latin America and all over the US, I am used to living in different kinds of places. And I move – a lot. Over the last twenty-five years, I’ve moved at least every two years! Now I’ve somewhat settled in the Boston area, and I’m hoping to break my own record by staying here a long, long time.

As a historian, I’m also used to traveling to other time periods (at least in my head). I am interested in just about every kind of history, but my reading takes me most often to the Americas and history of the Spanish-speaking world. My favorite kind of history is not about famous people, who get a lot of attention anyway, but obscure people. I most enjoy reading histories that immerse you in a time and place, giving you a sense of daily life there.

The Long Past & Other Stories: Ginn Hale on Inspirations & Influences