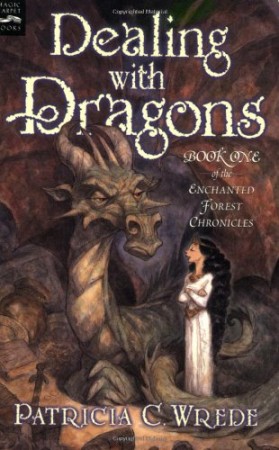 Cimorene is everything a princess is not supposed to be: headstrong, tomboyish, smart – and bored. So bored that she runs away to live with a dragon – and finds the family and excitement she’s been looking for.

Standalone or series: First book in the Enchanted Forest Chronicles

Why Are We Here: I read and reviewed The Dark is Rising Sequence.[1. Verdict: MEH] When I was done with that series, I asked our readers what should I read next and quite a few of you suggested The Enchanted Forest Chronicles by Patricia C. Wrede. The suggestion was met with enthusiasm by quite a few of you as well as by Thea (who loves the series) and so here we are.

What: Dealing with Dragons is the first book in this four-book series and it pokes fun at and subverts classic, trope-ish fairytales whilst still being a love letter to the genre.

The Directive: Princess Cimorene of the kingdom of Linderwall is bored out of her mind with the activities that are expected of her as a princess. She wants to do stuff like learn how to fight, to cook, to work, learn Latin and to do more than to get married off to a prince and live happily ever after. When her parents introduce her to a Prince who is anything but Charming, Cimorene follows the advice of a talking frog in finding her own way by running away from home to become a Dragon’s Princess. Working for the dragon Kazul turns out to be much more exciting especially when they get embroiled in an evil plot to take the Dragon throne.

Once Upon a Time: The Awesome Princess Cimorene, Kazul and Cimorene’s best friend Alianora are all great characters and I love the strong bond that develops between them. I appreciated the amount of spotlight given to Alianora and grew to like that character as much as I liked Cimorene. As the shiny star in the book, Cimorene is a princess that strives to be more than is expected from her and who takes charge of her own destiny with a great deal of agency. I also loved how much fun the author obviously had poking fun at tropes, especially at how Alianora’s life was so easy because she didn’t have an evil fairy curse her, for example. Similarly, the relationship between wizards and witches, and how wizards had very specific quirks really reminded me of Terry Pratchet, especially in how ridiculous the spell to vanquish them was. Great times.

Once Upon a Time: The Complicated First published in 1990, there are elements to Dealing with Dragons that feel a bit outdated and which made me uneasy. Although I can imagine how fresh it felt reading the book when it first came out, the truth is, reading the book 25 years on in 2015, when YA is such a huge market, Cimorene’s pluck and strive to be “unlike other princesses” now seem not only trope-ish in itself but perilously close to problematic.

When Cimorene, and to some extent Alianora, are so adamant about being “different” and doing their own thing, they do so by describing negatively things that are often associated with girls and “femininity”.

“Close” to problematic because I am not so sure that line is completely crossed: because there is a conversation here about what makes a “proper princess” that goes beyond those elements of “traditional” femininity. Cimorene even spends most of the book cooking and cleaning for the Dragons as well as fighting, taking care of the dragon’ s library and treasury and generally outsmarting everybody.

I do wish that the “traditional princesses” weren’t described and portrayed as vapid beautiful bitches.

Cimorene’s Flawless logic: Some of my favourite quotes:

“No proper princess would come out looking for dragons,” Woraug objected.

“Well I’m not a proper princess then!” Cimorene snapped. “I make cherries jubilee and I volunteer for dragons, and I conjugate Latin verbs– or at least I would if anyone would let me. So there!”

“Fencing is not proper behavior for a princess,” he told her in the gentle-but-firm tone recommended by the court philosopher.

Cimorene tilted her head to one side. “Why not?”

Cimorene considered. “Aren’t I a princess?”

“Yes, of course you are, my dear,” said her father with relief. He had been bracing himself for a storm of tears, which was the way his other daughters reacted to reprimands.

“Well, I fence,” Cimorene said with the air of one delivering an unshakable argument. “So it is too done by a princess.”

Wrapping up: I did really enjoy this one. And I will continue reading the series (I will give an overall rate when I finish the entire thing). Next up: Searching for Dragons on August 5.

What about you? Have you read Dealing with Dragons? Is that a childhood favourite or a new find? Let me know your thoughts!