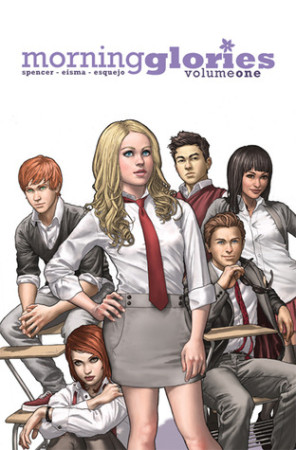 Morning Glory Academy is one of the most prestigious prep schools in the country, but something sinister and deadly lurks behind its walls. When six gifted but troubled new students arrive, they find themselves trapped and fighting for their lives as the secrets of the academy reveal themselves!

Stand alone or series: First volume in an ongoing series

For a Better Future collects issues #1-6 of Morning Glories, a comic series that debuted in 2010 and is still ongoing (currently at issue #42). The series follows six new students – Casey, Zoe, Jade, Jun, Hunter and Ike – as they start the new term at the prestigious Morning Glory Academy.

The first issue gives a bit of background story to each of them – the six characters are very different and come from varied backgrounds in terms of social and financial state as well as private and family lives. At first, it looks like they have nothing in common except… potential. A potential that has been tapped by the overseers at Morning Glory for NEFARIOUS AND SINISTER purposes as is made clear from the very start. Soon the kids are unable to communicate with anyone on the outside and they can only rely on each other. Maybe.

Writer and creator Nick Spencer describes Morning Glories as Runaways meets Lost. I know nothing (John Snow) about Runaways but throwing Lost in the equation is like catnip to me. And I can definitely see the similarities here: from the NEFARIOUS AND SINISTER Academy that is like a Dharma Initiative doing weird, completely unethical experiments to the slow revelation about who or what those characters are, independently and as a team.

I was engaged with this story from the get go and got super invested especially with regards to the characters – you know, kinda like Lost, even. The mystery surrounding the academy is suitably mysterious although the obvious NEFARIOUS AND SINISTER nature of what they are doing was exaggerated and overblown at times. It remains to be seen whether this is on purpose, a red herring, as maybe there will be twists and revelations that will show that the academy is not as NEFARIOUS AND SINISTER? Issue #6 came as a shock, when everything turned upside down – is that issue set in the future? Inside their heads? IN AN ALTERNATE TIMELINE? Who knows? I am eager to find out.

Out of all six teenagers, this first volume focuses a lot on Casey who turns out to be this super-smart, competent, quick thinker kick-ass character. I am completely enamoured with Casey and can only hope that all other characters will too, have their moment to shine.

Nick Spencer says he has the entire series planned to have a definitive ending by issue 100. Fingers crossed the series will not end like Lost ended, with me in a puddle of TEARS OF FRUSTRATION. I want to continue reading for sure, I want to know what goes on behind the academy, what is their purpose and why are the kids special.

As Ana says, the sales handle of “Runaways meets Lost” is enough of a shut-up-and-take-my-money incentive – add to this Joe Eisma’s bright, character-focused art? HELLS YES!

Suffice it to say, I, too, very much enjoyed Morning Glories.

As Ana says, this first volume focuses on the “getting to know you” stage of the ensemble cast. We are introduced, rapid-fire, to each of the six main characters and get a cursory look at their homes and relationships. We learn that:

Casey (the heroine and focus of this volume) is from a loving and supportive home; she’s all-American blonde and blue eyed, plus a star student and physics scholar. Casey is super eager to get to Morning Glory Academy because of its prestigious (if relatively short) history.

Jun is a quiet fighter from Tokyo, and we don’t know much about him other than he’s trained in martial arts, is regarded as the muscle of the group, and he is a quick thinker on his feet (hello, Anagram Master). He also, unlike the others, seems to know a lot about the Academy and its insidious history, and has his own agenda.

Hunter is a nice Canadian boy from Toronto (“like New York, minus all the stuff to do”), who is entirely good natured, a kind older brother, and a geek. At first glance, he doesn’t seem to excel in any way (at least, not in the way that the others do)… but he seems like a nice kid. His dad seems like a jerk.

Ike is a sociopath. He is the rich, privileged, white son who may or may not have murdered his father, who has been kicked out of every conceivable societal event and boarding school (much to the frustration of his Upper East Side society mother), and the character who is bent on acts of manipulation and male ennui and chaos-causing just for the hell of it. He’s also funny.

Jade is picked on as the “emo” chick of the group – she wears her emotions on her sleeve, has a tendency towards the dramatic (just read her initial journal entries), and also has a troubled home life. Her father and brother are terrified of her, she has a history of stalking a teacher, and displays suicidal/self-harm tendencies.

Zoe is a class manipulator (her introduction scene shows her playing several dudes at once) who acts tough and disinterested in anything outside of hot dudes, her own hotness, or having fun… but this seems like it’s a big act. When Jade is threatened and nearly murdered by one of their roommates, Zoe jumps in an tries to save her from a brutal death by stabbing – I think there’s a lot more to Zoe, and I want to learn what that is. Oh, and unlike the others, Zoe is adopted (from India). Like many of the others, she’s also a brilliant student with a ton of potential.

Cue LOST intro floaty letters, right? (Nerdy aside – other than Hunter mentioning Lost point-blank in a near-death experience and being happy he knows how the show ends, there’s also a cute moment at the airport when the name “Carlton Cuse” is up on a pickup card. Heh.)

When our intrepid students enter Morning Glories Academy, they quickly learn that things are NOT what they seem. The teachers are heinous, former students and relatives are killed, tortured, imprisoned, and for what purpose? Well… those are secrets to be discovered by the incoming class.

Other strengths to the series: the interactions between characters seem to be largely superficial and crisis-reaction-mode at present, but I sense a much deeper connection exists between each student, and I can’t wait to see how this unfolds. In particular, I love the interactions between the female characters – I want to see Casey, Jade, and Zoe as their relationship grows deeper and more complicated. I’m also drawn to the characters who seem like superficial jerks (Ike, Zoe) but who in actuality seem to me like they might be the Sawyers of this here comic book – and anyone familiar with the history of The Book Smugglers and Ana and myself knows how important Sawyer is, right?

To continue with the Lost-gushing (because… how can I NOT?), I love the tantalizing WTF!POLARBEAR type moments in this initial collection – the birthday revelation, the repeat phrases that have somehow endured over the centuries. What I don’t know is that if all of these tantalizing disparate pieces will come together in a cohesive way… or if we’ll end up with another Lost-type letdown by the end.

There’s enough goodness here to keep me interested – I’ll definitely be picking up the next few volumes in the series.

Last random thought: has anyone ever seen/played/read Danganronpa? Because Morning Glories also reminds me a LOT of this. Minus the sadistic Doraemon teddy bear.

And now we turn it over to you! Sound off and let us know what you thought of Morning Glories!