Will Frances Hardinge ever write a book I won’t like? 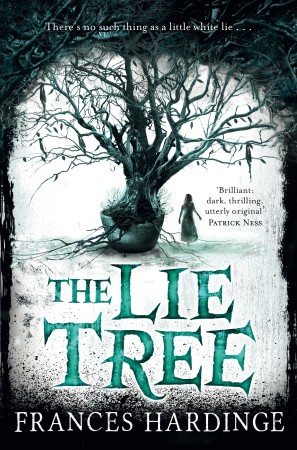 The leaves were cold and slightly clammy. There was no mistaking them. She had seen their likeness painstakingly sketched in her father’s journal. This was his greatest secret, his treasure and his undoing. The Tree of Lies. Now it was hers, and the journey he had never finished stretched out before her.

When Faith’s father is found dead under mysterious circumstances, she is determined to untangle the truth from the lies. Searching through his belongings for clues she discovers a strange tree. A tree that feeds off whispered lies and bears fruit that reveals hidden secrets. The bigger the lie, and the more people who believe it, the bigger the truth that is uncovered.

But as Faith’s untruths spread like wildfire across her small island community, she discovers that sometimes a single lie is more potent than any truth.

I’ve made several false starts with this review because I don’t know what to write. How do I describe The Lie Tree?

As a Victorian murder mystery?

As a tale about filial loyalty?

As a revenge story?

As a look at the ways that women have been made invisible throughout history?

As a feminist triumph?

These are all truths. But they are partial truths because this book is not one thing or another. Just like all of Frances Hardinge’s books before this, The Lie Tree is a complex narrative of subtle interwoven storylines that are surprising, dark, sad and incredibly beautiful. In fact, I’d say this is Hardinge’s most beautiful book to date. That sort of beauty that comes from things that are so real they feel make you like your heart has been pierced. But in the nicest way possible.

I want to be a bad example.

As the story starts, Faith’s family is moving to a small island, away from everything they know so that Faith’s father can work at a new fossil excavation. At first greeted with the fanfare an honourable guest deserves, things turn sour very soon when whispers of her father’s possible fraudulent actions reach their retreat. All of a sudden, no one wants to talk to the family. And then, Faith’s father turns up dead.
Ruled an accident but under suspicion of suicide, Faith suspects his death is something else altogether: murder. And deep in her heart she knows she must avenge the death of her dearest one.

And Faith knows exactly what do to, for hidden deep in a cave by the sea, there is a tree that if fed lies, gives out fruits of truth.

What’s most striking about The Lie Tree is that, at face value, this is perhaps Frances Hardinge’s least fantastical book. The most obvious fantasy elements of the plot don’t come into play well into the second half of the novel and even by them, the story remains a murder mystery with a character-driven arc.

I wondered if I was looking at it wrong. Because if we look at the realest aspects of story which describe events that really did happen, thoughts that people did believe, it is easy to be struck by how surreal they read. Because in truth, the further removed we are in time, the more history sounds fantastical to us. In a way, everything about The Lie Tree could be seen as fantastical, especially with regards to gender. But then again: no. Better not to reduce what was very real and very painful to flights of fancy.

Back in the trophy room the gentleman would be taking the leash off their conversation. Likewise, here in the drawing room, each lady quietly relaxed and became more real, expanding into the space left by the men. Without visibly changing, they unfolded, life flowers or knives.

I don’t know how to put to words what this book made me feel for its female characters. It was utterly perfection.

The Lie Tree is the story of a young girl – Faith – who is at that moment in time where she is no longer a child but not yet a woman. Faith lives a conflicting life, torn between what she is told about what it means to be a woman and the things that she is not supposed to do, feel and know and the feelings she has, the knowledge she knows and the thoughts she thinks. Constantly at war within herself, Faith strives to be good – but also to be accepted and loved. What she has learned over the years is how to hide, to conceal. In sum, how to become just as invisible as the world expects her to be. But she is ever so angry about it. And watching that anger unleashed was one of the best reading experiences of my life.

At the centre of Faith’s life is the dichotomous separation between her father and mother. She is incredibly loyal to her genius father, a prestigious Natural Scientist just as she completely disdainful of her mother, Myrtle, a lady who uses her looks to get what she wants. It’s the Victorian era and this division of roles and the perceived inherent quality that separates them is at the core of The Lie Tree.

Faith’s long journey to understanding both her father and her mother is one of the main focus of the book. And that journey is interspersed with encounters with a plethora of other ladies. At first Faith’s viewpoint is coloured by her own internalised acceptance of narratives surrounding women. To wit: in the beginning everything is her father and everything is male centric, intelligence and knowledge are relegated to menfolk. The more the story progresses, the more this changes. All of a sudden the women are there, have been there all along and they are something else altogether. Queer ladies, villainous ladies, adapting ladies, awesome ladies, accepting ladies, angry ladies. Myrtle, I adore you.

Remember: this is a story about lies.

Most of Frances Hardinge’s books to date have one way or another dealt with revolution and politics in a wider scenario. This is also true of The Lie Tree but I’d also say this felt like her most personal book in the way that revolution, politics, evolution affect the social, the intimate, the individual. Everything is politics.

It is deeply touching.

Equally moving are the relationships in the story. The way that Faith’s father breaks her heart. The way Faith breaks her mother’s heart and how they mend their relationship in the end. Faith and her brother Howard have incredibly touching moments.

There is also the never-named relationship between her and local boy Paul. Surprising no one, Frances Hardinge also knows how to write budding romance. Paul and Faith’s friendship is punctuated with delightful rule-breaking, by testing limits and boundaries and seeing how far they can go in the things they say to each other and how much of their real selves they can afford to show. Patriarchy destroys boys’ lives too. And every single scene together is one step further, building up to the most amazing, no-holds-barred talk in the last pages of this novel in which simple yet heart-breaking desires and truths are uttered.

I won’t spoil that conversation. Suffice it to say that never was a line answering the simple question “what do you want to be when you grow up” more thrilling.

Well, here it is. The elusive 10-rated Frances Hardinge book. The Lie Tree is perfect.

Joint Review: An Ember in the Ashes by Sabaa Tahir