SFF in Conversation: James Dawson – Why Is It About A Girl?

Today, we continue our ongoing new series “SFF in Conversation” with a guest post from Horror YA author James Dawson on writing his latest book Under My Skin and its female protagonist. 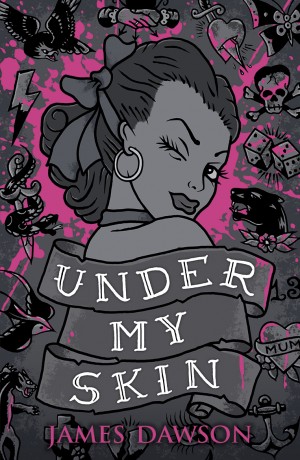 Why Is It About A Girl?

My new book, Under My Skin, comes out this week. It’s about a shy, lonely girl called Sally Feather who is gradually possessed by a dark entity, in the form of a tattoo, known as Molly Sue. Needless to say, Molly Sue makes Sally do VERY BAD THINGS.

However it is also About (capital A) duality, change and women. That’s right. Perhaps more so than its immediate predecessor, Under My Skin has THEMES. No! Please don’t run away! I promise it’s not WORTHY. But I do want to discuss these themes a little bit because I know these things are bound to pop up as they did with Lis London and Bobbie Rowe, my previous female lead characters.

Duality and change are easy. A character in Under My Skin tells Sally that we all have demons and I think that’s true. Sally’s is just more literal. On any given day we all struggle with one of those pesky seven sins. As I did when I went through adolescence, you wake up to this ‘darkness’, and so does Sally. This is very much a story about a sheltered girl taking off her blinkers and seeing the world, and her inner world, for the first time.

So it’s, in part, a story about a girl becoming a woman and this is where I know I might be on thin ice. I know, whatever I say from this point in, I have male privilege. You could stop reading this and start reading the book here. I was aware of my privilege when I wrote the book and I hope I took due care.

Why didn’t I just stop? Why didn’t I write about Tommy Feather? I could have easily. For one, I didn’t want to. The insinuation that men should write men and women should write women is silly, and the confusion at my writing female characters seems to imply that the stories of girls and women are somehow less worthy than those of men: ‘You’re a guy, tell guy stories!’. Joss Whedon got that a lot with Buffy too. There is also an assumption that men and women are fundamentally different and can never hope to understand each other. More on that later. What’s also true is that women authors are rarely asked how they wrote male characters – as if straight, white men are ‘the norm’ and we should all automatically understand that state of being.

Another theme of Under My Skin is the representation of girls and women. Sally straddles these terms and is coming to terms with what the world seems to expect of her. It fascinates me. I watch pop videos and adverts and movies and wonder what it must be like to grow up surrounded by this not-too-subtle misogyny for both girls and boys. I think through movements like Everyday Sexism, young women are increasingly aware of insidious sexism and a new generation of women, proud to call themselves feminists, are called to activism. I am also proud to call myself feminist, and believe any man who believes in equality should too.

When Macklemore performed Same Love at last year’s Grammys, he took a lot of flack as a straight male ally of gay rights. Why can’t we have a gay rapper at the Grammys? Why couldn’t we find a gay guy to play Liberace? Why couldn’t we find a trans actor to play the Jared Leto role in Dallas Buyers Club? There is a whole other conversation about the role of the ‘ally’. I’m not sure I’d say I was a feminist ‘ally’, I’m just a feminist and this was one theme I wanted to explore with Molly Sue and Sally. This isn’t about “hogging the mic” but while I have a voice and platform and I want to support equality.

Here’s another thing. As should be abundantly clear to anyone who has read Being A Boy or This Book Is Gay, I don’t buy into gender binaries. I do not necessarily identify as male. If pushed I’d say I was genderqueer, but I’m more inclined to think any assumptions we wrongly make about men and women ‘on the inside’ are societal.

I am biologically male, however, and this is how I came by my privilege. That said I am a gay male, and the world treats me as such. As an author, all I can do is take the prejudice I’ve experienced and try to extrapolate from that what it might be like to experience the same as female.

I’m SO, SO not getting into Privolympics. If you want to debate who has the least privilege: women or gay men, be my guest. I don’t think anyone wins those arguments and, frankly, they detract attention away from the real enemy – the oppressors.

This is the last time I’ll write about this, I think. Why? Under My Skin is seven thousand times more fun if it’s a book about a girl with an evil tattoo. It’s a spooky fantasy story! Anyone who has studied a novel at GCSE, A-Level or degree will know that overanalysing themes is the best way to kill a book dead. I hope you enjoy the story and that you love Sally and Molly Sue as much as I do.

For eight years, James Dawson was a teacher specialising in Personal, Social, Health and Citizenship Education (PSHCE). As well as being a sexpert, his debut, best-selling YA novel HOLLOW PIKE was nominated for the prestigious Queen of Teen prize and was followed with the publication of YA thriller CRUEL SUMMER. James’s first non-fiction title BEING A BOY, the ultimate guide to puberty, sex and relationships for young men, was published in Autumn 2013. James is also a Stonewall Schools Role Model, and his guide to being LGBT* – entitled THIS BOOK IS GAY – was released summer 2014, alongside his first fiction title for Hot Key Books, SAY HER NAME. UNDER MY SKIN is his latest book, published on March 5 2015. When he’s not writing books to scare teenagers in a variety of ways, James can usually be found listening to pop music and watching DOCTOR WHO and horror movies. He lives and writes in London. Follow James at either www.askjamesdawson.com or at www.jamesdawsonbooks.com or on Twitter: @_jamesdawson

SFF in Conversation with Mishell Baker: Fun With Fey