A Wicked Thing is a reimagining of the fairytale Sleeping Beauty, a variant that combines the Disney version’s Aurora and Perrault’s version. It opens as Aurora opens her eyes when a prince kisses her lips awakening her from a one hundred year slumber and it closes with a question mark. 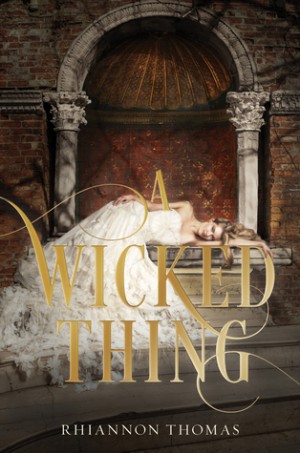 Rhiannon Thomas’s dazzling debut novel is a spellbinding reimagining of Sleeping Beauty and what happens after happily ever after.

One hundred years after falling asleep, Princess Aurora wakes up to the kiss of a handsome prince and a broken kingdom that has been dreaming of her return. All the books say that she should be living happily ever after. But as Aurora understands all too well, the truth is nothing like the fairy tale.

Her family is long dead. Her “true love” is a kind stranger. And her whole life has been planned out by political foes while she slept.

As Aurora struggles to make sense of her new world, she begins to fear that the curse has left its mark on her, a fiery and dangerous thing that might be as wicked as the witch who once ensnared her. With her wedding day drawing near, Aurora must make the ultimate decision on how to save her kingdom: marry the prince or run.

Rhiannon Thomas weaves together vivid scenes of action, romance, and gorgeous gowns to reveal a richly imagined world … and Sleeping Beauty as she’s never been seen before.

Why did I read this book: In truth, I disregarded the book because of the cover (shame on me). It wasn’t until I started reading the author’s blog Feminist Fiction that I decided I had to read the book.

A Wicked Thing is a reimagining of the fairytale Sleeping Beauty, a variant that as far as I understand, combines the Disney version’s Aurora and Perrault’s version. It opens as Aurora opens her eyes when a prince kisses her lips awakening her from a one hundred year slumber and it closes with a question mark.

The in-between is a fantastic, meandering journey in which Aurora gets pulled into a whirlwind of unfair expectations placed on her which include but are not limited to: an entire kingdom that has been waiting for her to wake up to save them all from the bad decisions made by their rulers in the past hundred years; a group of rebels that hope to co-opt her to their side because the dire economic, political and social problems that afflict the kingdom are about to burst into a revolution; the fact that magic is no longer the answer to any of it, even though magic might still be brought back because now she is awaken.

Most of the story though takes place inside the head of the heroine, asking the hard questions: who would Aurora be as a person considering she spent her whole life inside a tower, living under the strain of a curse put on her, forever scared, always expected to behave a certain way by her kingdom as well as her parents? What would she feel when she wakes up after one hundred years to find out her parents are dead, everything she has ever known is forever gone? And that for the past hundred years countless strangers have kissed her lips without her consent? What would she think when she wakes up to learn she needs to marry someone she barely knows and who, for all intents and purposes is her “true love” because that’s who all the history books say he is supposed to be? And that if she doesn’t marry him, she will disappoint all the people who depend on her?

How would all of this affect an 18-year-old girl?

That’s what this story is about and I loved A Wicked Thing wholeheartedly for everything that it is but also for everything that it’s not. Because this is not the tale of a kick-ass “Strong Female Character” who wakes up and takes control and fights evil and wins. And even though I too, love those types of stories, I believe we have all grown used to expect certain things from our heroines and if they don’t meet these expectations, we are too fast in calling them “weak”. The curse of the “Strong Female Character” is that too often only a certain type of “strength” qualifies and those heroines who happen to be quiet, reflective, calm, who happen to not “kick-ass” or for some reason take more time to get to wherever they are going, end up being dismissed as not good enough.

The fact is that for most of this book, Aurora does not know what to do, how to behave, what to think. In fact, she never does. And why should she? She never had a chance, a choice, she has always been what other people made her be, and still after all this, she is still expected to conform and perform a certain way. She spends most of this book uncertain, trying not to crumble under such weight, taking tentative steps to autonomy – yes, even if that autonomy is still limited.

Bonus points for: a queen that is not an Evil Queen and who, as a woman, has similar impositions placed on her. The opposition between Aurora and the queen is one of equals that choose to take different journeys. This is a tale of resentment too, of that type that can fester and then explode when one least expects. Similarly, Aurora meets three different potential romantic interests, two of them princes, one a commoner. Once one of them is not completely straightforward with her? She writes him off and he never shows up again.

It’s not that this is a perfect book, mind you. The politics and social unrest are not developed with the depth these topics deserve; the Evil King is villainous to the point of caricature; and the magical rules of the world are confusing, although I expect the first and last points will continue to be developed in this series.

In spite of those, A Wicked Thing really hit all the right notes for me. Read this if you liked Ash by Malinda Lo and Hunting Monsters by S. L. Huang. Read this because we need heroines like this Aurora and more books that interact with premises such as this one in thoughtful ways.

I read this book and I kept thinking about Buffy’s Cookie Dough speech at the end of Buffy the Vampire Slayer – remember those words?

Ebook available for kindle US & iBooks