Half-Resurrection Blues is Daniel José Older’s first novel and the start of the Bone Street Rumba series. The writing, the humour, the main character’s deeply felt sense of loneliness and the diversity of the world are praiseworthy. 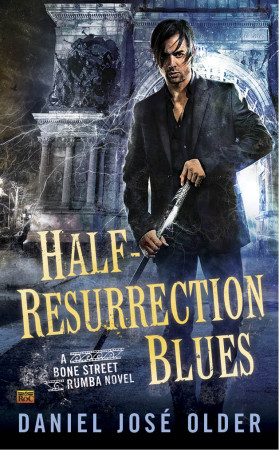 “Because I’m an inbetweener—and the only one anyone knows of at that—the dead turn to me when something is askew between them and the living. Usually, it’s something mundane like a suicide gone wrong or someone revived that shouldn’ta been.”

Carlos Delacruz is one of the New York Council of the Dead’s most unusual agents—an inbetweener, partially resurrected from a death he barely recalls suffering, after a life that’s missing from his memory. He thinks he is one of a kind—until he encounters other entities walking the fine line between life and death.

One inbetweener is a sorcerer. He’s summoned a horde of implike ngks capable of eliminating spirits, and they’re spreading through the city like a plague. They’ve already taken out some of NYCOD’s finest, leaving Carlos desperate to stop their master before he opens up the entrada to the Underworld—which would destroy the balance between the living and the dead.

But in uncovering this man’s identity, Carlos confronts the truth of his own life—and death…

Why did I read this book: Urban Fantasy is not one my go-to genres of choice. Usually, I will read UF when it’s written by a favourite author (hello, Seanan McGuire) or absolutely recommend by trusted sources. I came to Half-Resurrection Blues following its author Daniel José Older’s work in the anthology Long Hidden (co-edited with Rose Fox). That, plus the promise of a diverse Brooklyn that mirrors the real-life diverse Brooklyn I happen to love. That promise is delivered in spades.

Carlos Delacruz is an agent with the New York Council of the Dead who can be often found working alongside his ghostly partner trying to maintain peace between the dead and the living and protecting the entrada to the underworld. Brooklyn is his domain, where he goes hunting when he is told and where he has found a measure of peace and companionship amongst those who know what he is if not who he is.

For Carlos is an inbetweener, someone not entirely dead but also not entirely alive either, his skin an unhealthy shade of grey, his body as cold as a corpse, his heart barely beating. Half-resurrected from a death he doesn’t completely recall suffering, he also has no recollection of his actual life: his name has been given to him by his now friends, his mission in life a gift that keeps him going.

Up until now Carlos has never truly questioned his job or how he has become what he is. But then one mission leads him to meet someone like him, another inbetweener with a dangerous plan, someone he ends up killing on the job. That death comes back to haunt him just as his loneliness becomes a sharp knife that constantly pierces his soul: what would they have said to each other had they had a chance?

But then he comes to know others like him. One of them is Sasha, the sister of the man he just killed and the woman he becomes desperately attracted to. The other is a sorcerer with a plan that could bring down the invisible walls between the living and the dead. An infestation of ngks threatening to destroy Mama Esther, one of Carlos’ best friends is only the cherry on top of a mountain of problems Carlos is about to face.

Half-Resurrection Blues is Daniel José Older’s first novel and the start of the Bone Street Rumba series. The writing, the humour, the main character’s deeply felt sense of loneliness and the diversity of the world are praiseworthy. When it comes to the writing, Half-Resurrection Blues somehow manages to be both poetic and completely down-to-earth – Carlos is a fan of poetry and often finds himself waxing (incredibly cheesy) poetic:

I want to take that face in my hands and put my own face against it and let our connecting faces be the fulcrum that swings our two bodies together and let the winter night guide our combined life forces into an intimate tangle that obliterates all our fears and regrets, but instead I just smile and offer her my arm.

…at the same time that he does not hold back on the fucks and shits and every inbetween (ha) thing.

It’s a heady combination that works really well because Carlos’ speaking patterns are also very much inbetween: at times it sounds out-of-place and outdated and at times contemporary. I often wondered when did Carlos first die, a mystery yet to be solved and I would not be surprised if he wasn’t alive in the sixties or seventies. He is also, in the vein of much of UF’s main heroes and heroines, a smart-ass, snarky and ultimately funny narrator. I loved his voice.

With regards to the plot and the world-building, Half-Resurrection Blues has a supernatural procedural mystery at its centre which unfolds slowly and gives chance to a myriad of characters to be brought into the fold. Most of them are not-white, might I add, and complicated elements of racism appear here and there, never taking centre stage but never out of sight either.

I think my favourite scene in the entire novel is when most of the secondary cast surrounds an injured Carlos (the circumstances of said injury is a moment that literally made me cheer out loud. It was, shall we say, a result of a deserved grievance): a paramedic, a surgeon, a santero and a snarky teenager working together to save his ass.

In the midst of all the positive aspects – and I did really enjoy, nay, I loved this novel – there is one not so positive thing that I must remark on: the portrayal of Carlos’ love interest, Sasha. Half-Resurrection Blues feels like a very male world ( a lot more male characters in comparison) but there are well-written women present and accounted for like Mother Esther and Kya.

Sasha however is woefully under-developed even though she occupies Carlos’ mind through most of the novel. From the moment he sees her (in a photograph), she becomes nothing more than a vessel for his gaze: a vessel for his lust to start with, then a vessel for his love, his guilt, his shame, eventually his seed and toward the ending she even becomes the villain’s vessel. Sasha has little agency and even the key moments shared between Carlos and her are mostly off-page – there is a scene where they sit down to have a conversation that could have helped in creating a better idea of who Sasha is but the scene is literally Carlos telling us “we talked all night.” At the end of it, he is in love and I don’t know why.

This is all the more lamentable because there were glimpses into what I can only describe as a fucking amazing woman but they only came through Carlos’ gaze.

In spite of that, Half-Resurrection Blues is a solid, fun debut that I thoroughly enjoyed and absolutely recommend. Can’t wait for the sequel: here’s hoping for more, better Sasha.

Because I’m an inbetweener, and the only one anyone knows of at that, the dead turn to me when something is askew between them and the living. Usually, it’s some mundane shit — Clean up work. But every once in a while it gets really hairy, and that’s when I go hunting. These are the times when I forget that I was ever even dead. Whatever shadow of life or humanity pertains to me — I know God put me on this fine planet to hunt.

Plus I’m good at it.

But the Council was all kinds of vague about this one. No explanation, just a photo of a man slid across the table with icy fingers. We believe this is the source, Carlos. His name is Trevor Brass. Do your thing.

An icy pause. Eliminate him.

And me: “Care to elucidate further?”

And what can really be said to that? They’re dead. They don’t have to elucidate shit. I don’t mind though. Makes things more interesting.

Oh, and protect the entrada at all costs.

The dead are good for coming up with some last minute oh-and-by-the-way type shit. Protect the entrada. An entrada is an entrance to the underworld. There’s only a couple scattered around the city and they’re supposed to be well guarded by a team of fully dead COD soulcatchers and impossible to get through, all of that, but really, it happens. Soulcatchers have other things to do, turns out, then stand around flickering doors to Hell. Protocols tighten and then slack again. The particular entrada they’re referring to is in a shady grove in the middle of Prospect Park, not at all far from all this mess. It’s not hard to imagine whatever this grinning fellow in the picture is up to has something to do with breaching through. How they expected me to simultaneously track the dude down and keep him from getting to the entrada is another question, but that’s not their concern. The Council tosses whatever garbled up mandate they’ve regurgitated from their eyes in the field and it’s on me to sort out through the chaos.

So I nodded, pocketed the picture and walked out the door.