A Smugglerific Cover (& Giveaway): The Wand & the Sea by Claire M Caterer

Today we are delighted to unveil the cover for a middle grade novel, The Wand & the Sea by Claire M Caterer! 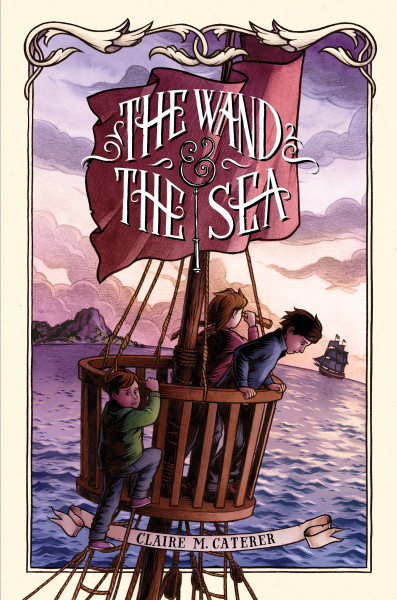 A year has passed since Holly and Ben Shepard have been to England, where they brought their friend Everett to a fantastical realm called Anglielle. Having vowed to return and help the Exiles, Holly, Ben, and Everett are hoping to find their way back to the land ruled by a tyrant king and sorcerer who have outlawed magic.

But when they arrive in Anglielle, they discover things aren’t what they expect: Their friends are imprisoned and the alliance is scattered. Ruthless King Reynard and the sorcerer Raethius are determined to find the very Adepts they exiled in the first place—but why?

It’s up to Holly and the boys to sail to the Isle of Exile and find the Adepts first, but that means enlisting the help of the Water Elementals and a pirate captain with a private agenda. Everett is obsessed with a mysterious locket with a mind of its own, and somehow, no matter where they go, a sinister black-sailed schooner appears on the horizon. With no one to teach her, can Holly master Elemental magic in time to save the Adepts of Anglielle?

Claire M. Caterer is the author of The Key & the Flame, the first book in this series, as well as several short stories for adults. She writes and lives in the suburbs of Kansas City with one husband, one daughter, two dogs, and a host of imaginary friends.

Claire M. Caterer on the cover:

Some people have just the right feel for middle-grade fiction. They get it. MG readers don’t like to be talked down to and they don’t want to be mollycoddled, but they’re also not “junior” young adults. They are unique, passionate readers.

So who gets middle grade? Karl Kwasny.

He’s created some fantastic covers in the past, including Claire Legrand’s The Year of Shadows, Elisabeth Dahl’s Genie Wishes, and my own first novel, The Key & the Flame. So I was beyond thrilled when I heard he would be the artist for The Wand & the Sea. His style conveys the perfect blend of magic and adventure to invoke the mood of my stories.

I love the hand-lettered typography, for starters. It has an old world feel without looking old-fashioned, which also ties in with the book’s plot. The cover’s border and style instantly link it to its predecessor. Right away it’s clear that The Wand & the Sea belongs in the same world. The navy-colored spine lends the right nautical note.

I like the way the characters are depicted too. Holly, the leader, looks out to sea; Everett is focused on the present; and Ben, always more cautious, scrambles up behind, looking like he regrets climbing up to the crow’s nest.

The gathering storm clouds and the black schooner on the horizon add a perfect touch of the ominous. I couldn’t have asked for a lovelier job. Thanks so much to Karl Kwasny and the McElderry Books art department for another gorgeous cover!

We have one signed ARC to give away. The sweepstakes will run until Saturday, January 24 at 12:01am EST. To enter, use the form below! Good luck!