Who: M.R. Carey, British writer of prose fiction and comic books. He has written for both DC and Marvel, including critically acclaimed runs on X-Men and Fantastic Four, Marvel’s flagship superhero titles. His creator-owned books regularly appear in the New York Times graphic fiction bestseller list. He also has several previous novels and one Hollywood movie screenplay to his credit. Thea loved his latest novel is The Girl with all the Gifts. 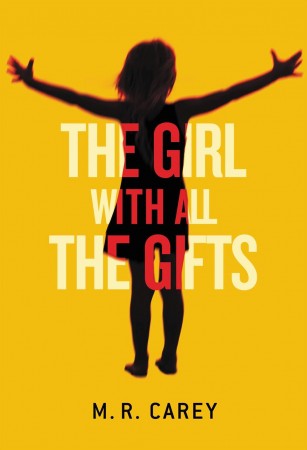 Please give it up for M R Carey!

The wonderful British alt-folk band The Moulettes brought out their third album, Constellations, in June of this year. It was one of my favourite albums of the year, and it started with a song that felt a little bit like a manifesto. In Glorious Year (Turn Of the Centuries), Hannah Miller and Ruth Skipper declared ringingly:

“This will be a glorious year,
I can feel it in my fingers.
All is far from being forsaken.”

(You can hear the song here, if you’ve a mind to)

On the political scene this year it sometimes felt like the opposite was the truth, but it was still a comforting message. And in terms of books, movies and music I’d say it was a fairly accurate prediction. In TV too there were plenty of wonders on display, but I also had some more aggravating experiences which I’ll go into in a small ranty section below (set off between rant warnings). 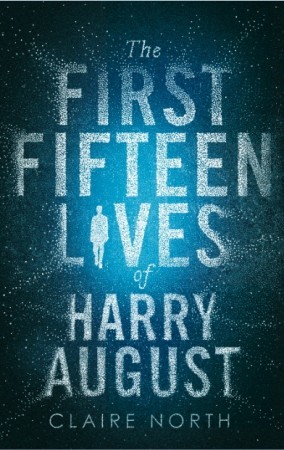 I’m spoiled for choice in most of these categories. My favourite novel of the year was probably Claire North’s amazing debut (well, her debut under that name), The First Fifteen Lives of Harry August. Full disclosure, North and I share an agent and a publisher. That was probably why I got sent the ARC ahead of publication, but it’s not why I went on to rave about it. It’s just a really wonderful, enthralling book that keeps on surprising you as it expands its core premises in ways you don’t see coming.

I love time travel as a conceit, and I love it when a writer does something original and unexpected with it. What North does is to have time manipulation without any actual travel. Her protagonist, Harry August, is one of the very few human beings born with the ability to experience time in a different way from the rest of us. He lives his life again and again, endlessly.

Harry has full memory of his past lives. He can choose to repeat the same actions or he can do things differently. The world will sometimes change as a result, but none of these changes are immutable because the counter is always being reset with each death and rebirth. But changes – awful and dangerous ones – are feeding through human history anyway. One of the reborn is tampering with time, and as a result the world is ending. The scary thing: with each cycle of rebirth, that ending comes earlier and earlier. The end of the world is sweeping BACKWARDS through time, threatening to destroy the reborn along with everyone else. Harry has to find out why this is happening and then he has to stop it. What’s more, he has to do it before his enemy can find him and rip him out of existence altogether. 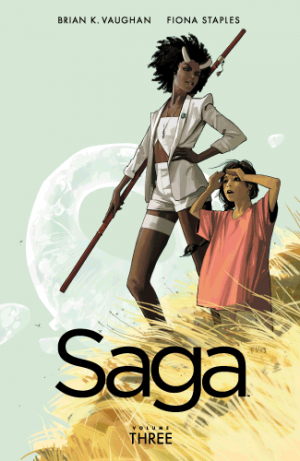 In graphic fiction, the third volume of Brian K. Vaughan’s utterly wonderful Saga topped the poll for me. That book continues to amaze me with its combination of insanely wide scope and unfailing focus on the tiny human moments that make you want to sing or cry. There’s now an oversized hardcover, also released this year, which collects all three of the trades that have been released so far. Fiona Staples’ art is even more gorgeous in this scaled-up format, and there are value-added features such as a sketchbook and a long essay by Vaughan about how he, Staples and their collaborators produce the book. A good excuse to re-read the story so far, as if any excuse was needed. 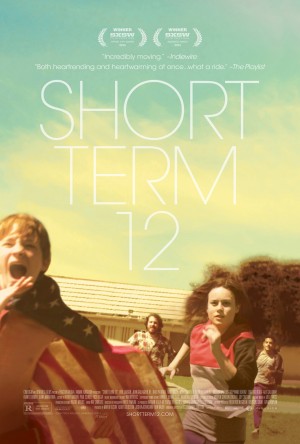 In movies (while keeping one eye on gems like X-Men: Days of Future Past, The Babadook, Pride and Blue Ruin) I’m going to cheat and go for Short Term 12. It’s cheating because the movie’s US cinematic release was in 2013, but it got so little play in the UK that most people over here didn’t even know it existed until it popped up on Netflix a few months ago.

Short Term 12 is a micro-budget movie by anyone’s standards (IMDb gives the total spend as $3500), but to say it punches above its weight doesn’t go near to describing it. It explores the lives and relationships of troubled teenagers in a short-term group care facility, and also introduces us to the staff members who look after them. It’s an ensemble piece, but at the centre of it is Grace (Brie Larson), a supervisor at the home who is unable to separate her concerns for her vulnerable charges from her own experience of abuse. It’s a spellbinding performance – one of many in the movie. And the story as a whole does something that’s all too rare: it drops you into this situation, which most of us haven’t experienced first-hand, so immersively and authentically that you come out of it momentarily thinking that was your life you just watched. You wake up slowly. 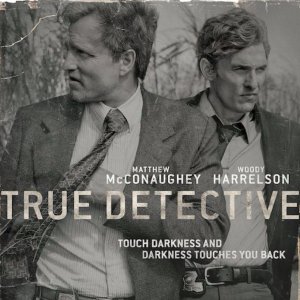 The stand-out in our TV year was True Detective, which we mainlined in the space of two days. Okay, that’s only seven episodes, but they hit so hard that a chill-out period was required after each one. Amazing performances from Matthew McConaughey and Woody Harrelson, and a script so sharp you could use it to write obscene graffiti on a diamond. It was apparently partially inspired by the short stories of Robert W. Chambers, which I keep on meaning to check out.

But it was in watching True Detective that a trope clicked into focus for me – one that I tend to react against, but whose pervasiveness I hadn’t really clocked until I started counting on my fingers.

There’s a scene in True Detective in which Rust (McConaughey) is seduced by Maggie (Michelle Monaghan), his partner’s wife. Maggie does this in order to get back at her husband Marty (Woody Harrelson) for multiple and aggravated infidelities. She has a really good understanding of her husband, and she knows that this will cause him massive hurt, because however much screwing around he’s done he’s still a control freak and a hugely jealous man.

The scene works. It works mainly because none of Harrelson’s behaviour – the adultery, the double standards, the scary overbearing jealousy – is mitigated or excused. But I found myself comparing it to similar scenes that really didn’t work for me, and I realised it was an instance of a really common trope. Got a female character who you want to make more interesting? Make her have sex with somebody really inappropriate!

The first TV series I stopped watching because it made use of this beat was the French cop drama Engrenages (Spiral). In that show the protagonist, detective Laure Berthaud, has sex with a junior colleague very shortly after they meet for the first time and get assigned onto a case together. It’s a nonsensical beat because the sex has no meaning for her and yet it inevitably comes to complicate and partially define her professional relationship with a man who she’s supposed to manage and supervise in stressful and dangerous situations. It’s such a bad decision that it makes her character ridiculous and implausible.

Then I watched the first season of Homeland, in which Carrie Mathison (Claire Danes) has wild sex with Nicholas Brody (Damian Lewis) on the hood of a car, despite suspecting him of being a sleeper agent for jihadi extremists. In this case I read numerous reviews that applauded the scene concerned as an amazing, unforeseen game-changer. I just thought: this woman is meant to be one of the best agents in the CIA, and she goes and does this ludicrous thing because (get out of jail free card) she’s drunk. Okay, she gets that scene later where she says she seduced Brody as part of a trawl for information, but she also gets to maunder tearfully about “the parts of it that were real”. And come on, what could she reasonably expect to find out by having sex with him that she couldn’t get in other ways? Does she expect him to yell out in Arabic when he climaxes?

I hope I’m not coming across as prudish here, because it’s really not that at all. I don’t disapprove of sex. There’s a world of fun and profit to be had there, and in real life (as opposed to fiction) nobody gets to tell anyone how they should or shouldn’t have it, or who with. But in fictions sex is a signifier, and I think it’s reasonable to ask what it’s signifying.

It seems to me to be saying, again and again: these are clever, gifted professional women, but at the crucial moment their emotions overwhelm their brains (emotions being a thing women are very prone to) and they sloppily, thoughtlessly reach out and get entangled with the guy they’d be best advised to stay away from.

Once you start noticing it, it’s hard to stop. Julianna Margulies in The Good Wife (colleague), Anna Torv in Fringe (colleague), Gillian Anderson in The Fall (junior colleague). Again and again, strong professional women who jettison their professionalism and cause themselves endless difficulties by choosing to sleep with a man with whom their job is going to bring them into repeated contact. As though they don’t really care about the job when passion comes calling.

By way of contrast, look at how Saga Noren’s sexuality is handled in The Bridge. She has multiple partners because she finds sex pleasant and relationships really difficult. The men she chooses are strangers who she picks up in bars, and they don’t impact on her professional life at all. She uses them to scratch an itch, and then they part with (for the most part) no hard feelings on either side. It’s convincing, it’s sharply observed and it doesn’t compromise the way the character has been set up in the way I feel these other examples do.

I’m probably making too much of this. You could make a case that some or all of these portrayals are empowering. You could also point out that protagonists in any ongoing drama are going to have sex lives because most people do, at least occasionally. And I’m pretty sure you could find some balancing examples for male protagonists (although I’d argue that the beat is usually played differently for men). I just wish the sex-with-a-colleague-or-client trope hadn’t become such universal standard issue.