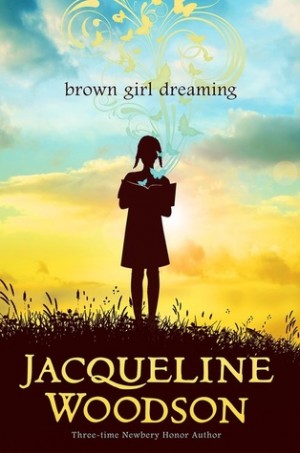 Jacqueline Woodson, one of today’s finest writers, tells the moving story of her childhood in mesmerizing verse.

Raised in South Carolina and New York, Woodson always felt halfway home in each place. In vivid poems, she shares what it was like to grow up as an African American in the 1960s and 1970s, living with the remnants of Jim Crow and her growing awareness of the Civil Rights movement. Touching and powerful, each poem is both accessible and emotionally charged, each line a glimpse into a child’s soul as she searches for her place in the world. Woodson’s eloquent poetry also reflects the joy of finding her voice through writing stories, despite the fact that she struggled with reading as a child. Her love of stories inspired her and stayed with her, creating the first sparks of the gifted writer she was to become.

I am born on a Tuesday at the University Hospital
Columbus, Ohio
USA?
a country caught

between Black and White.

I am born not long from the time
or far from the place
where
my great, great grandparents
worked the deep rich land
unfree
dawn till dusk
unpaid
drank cool water from scooped out gourds
looked up and followed
the sky’s mirrored constellation
to freedom.

I am born as the south explodes,
too many people too many years
enslaved then emancipated
but not free, the people
who look like me
keep fighting
and marching
and getting killed
so that today?
February Twelfth Nineteen Sixty-three
and every day from this moment on,
brown children, like me, can grow up
free. Can grow up
learning and voting and walking and riding
wherever we want.

I am born in Ohio but
the stories of South Carolina already run
like rivers
through my veins.

Written in free verse, Jacqueline Woodson’s Brown Girl Dreaming is a memoir of her childhood, a collection of passages about growing up between her father’s Ohio and her mother’s South Carolina in the sixties and then eventually moving part of the family to New York. It’s been published as a middle grade memoir but it lends itself well to all audiences.

I am not a huge fan of poetry and as such I tend to avoid books in verse which is why it took me so long to get to this. It wasn’t until the book won the National Book Award[1. Of course, the discussion about the book and the celebration of this wonderful win have been marred by the horrible racist events surrounding what should have been a happy time. The author wrote an incredible piece for the New York Times and it covers pretty much what needed to be said about it. The Pain of the Watermelon Joke should be as required reading as this book] a couple of weeks ago that I decided to give it a go. I am glad I did for Brown Girl Dreaming is wonderful…

…and its wonderfulness is manifold.

These chronicles navigate freely and with ease the waters of both history and story. The former in the way that, Jacqueline, as a young child, witnesses not only the acute differences –at a deeply personal level as well as at the social, universal sphere – between the South Carolina of her early childhood and the New York of her early teens always in the middle of the Civil Rights movement. The latter comes with the writing itself as intimate, painful as well as joyful memories turn into something special in the hands of a capable, talented storyteller.

Storytelling is in fact, a huge part of the young girl’s life: in Brown Girl Dreaming, it is made clear that the author has always been passionate about stories, about invention and creativity even as her learning difficulties are scrutinised by raw memories laid bare in front of our eyes.

Of those raw memories there are quite a few: carefully constructed verses of remembered loss, grief and separations abound. Just as abundant though, as those moments of joy, of happiness, of bonding and love. From Jacqueline’s grandparental family in the south to her closeness with her brothers and sister and her best friend (forever) Maria, it is all there with such incredible verve that the connection happens between not only the living, breathing people within the pages but between them and us. It was delightful beyond compare to reach the ending to find real photographs of Jacqueline Woodson’s family and to be able to put a face to those names.

Brown Girl Dreaming is an excellent book on its own and as an exceedingly moving memoir. That said, its importance as a book aimed at children cannot be underestimated either for everything that it is: a brown girl dreaming. Every single part of that sentence – brown girl dreaming – is vital.

“I am not my sister.
Words from the books curl around each other
make little sense
until
I read them again
and again, the story
settling into memory. Too slow my teacher says.
Read Faster.
Too babyish, the teacher says.
Read older.
But I don’t want to read faster or older or
any way else that might
make the story disappear too quickly from where
it’s settling
inside my brain,
slowly becoming a part of me.
A story I will remember
long after I’ve read it for the second, third,
tenth, hundredth time.”