Tomorrow, October 21, we will be publishing our second Fall title, In Her Head, In Her Eyes by Yukimi Ogawa. To celebrate the release, we invited the author to talk about the story, about “Hachikaduki: A Girl with a Bowl on Her Head”,[1. You can read a version of the original story here (click on number 197 on the left hand side menu) translated from the Japanese by Masahiro Kudo, and reproduced with his permission in the ebook] the old Japanese tale that inspired her retelling and the ways she departed from the original. 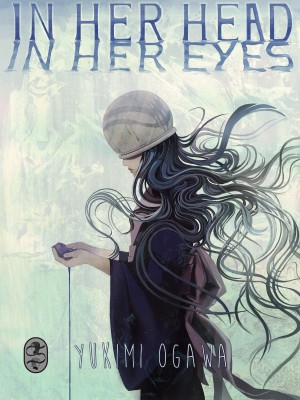 Please give it up for Yukimi Ogawa, everyone!

The tale of “Hachikaduki”, the pot-wearing princess, had always struck me as a very absurd story. When the goddess of mercy told her to hide Hase’s face in a pot, why didn’t Hase’s mother protest or question the deity? Why didn’t anyone — including Hase’s own father — explain to the second wife or others the reason why Hase bore that pot on her head? Why did no one at the noble house ever think there must have been a reason she wore that pot? After rereading an older version of “Hachikaduki” (slightly different from the version Kudo-san translated) for the first time in over a decade, my immediate thought was “Oh, so this is a story of a pitiful wife and her enemy-husband.”

The “enemy-husband” is a notion that has popped up in certain corners of Japanese Internet-verse over the past few years. The term refers to a husband who acts, voluntarily or not, as an enemy to his wife. This typically applies to a situation in which the relationship between the husband’s original family (his mother/father/siblings) and his new family (his wife and children) is not going well — in many cases, the husband’s mother is being hostile to his wife. The husband usually attempts to get away with the uncomfortable situation by trying to please his mother, while asking his wife to endure her mother-in-law’s bullying.

In the version of “Hachikaduki” that I recently reread, the young noble man keeps saying to his wife, “Let’s leave this house so they can no longer bully you,” but always changes his mind at the last minute. In the end, the princess’s pot cracks open and she herself saves the couple by showing her skills in poetry and music, proving herself worthwhile to her in-laws as their son’s wife. Throughout the tale the noble man stays quite useless.

I don’t know why it took so long for her pot to crack open and help Hase in the original tale. Perhaps to make sure the noble son truly loved her? Or did the goddess of mercy finally deem the husband useless, granting Hase the chance to escape the situation by herself?

If I were the goddess, I wouldn’t have let Hase marry that man.

If times were different, perhaps Hase would have chosen independence — to leave her noble husband behind and use her impressive skills for more worthy purposes. I wanted my Hase to choose her own perfect moment to crack open the pot on her head, to reveal her true nature and her true purpose. After all, I love a good story about a woman who realizes, at her own perfect moment, that she alone is the key to triumphing over her enemies.

In Her Head, In Her Eyes will be available on October 21, 2014. You’ll be able to read the short story in full for free here on The Book Smugglers, but we’ll also have a DRM-free ebook (EPUB, MOBI, AZK) that contains the story as well as the original Japanese tale, a Q&A and essay from the author, available for purchase on all major ebook retail sites.

Add the book on Goodreads: Here.